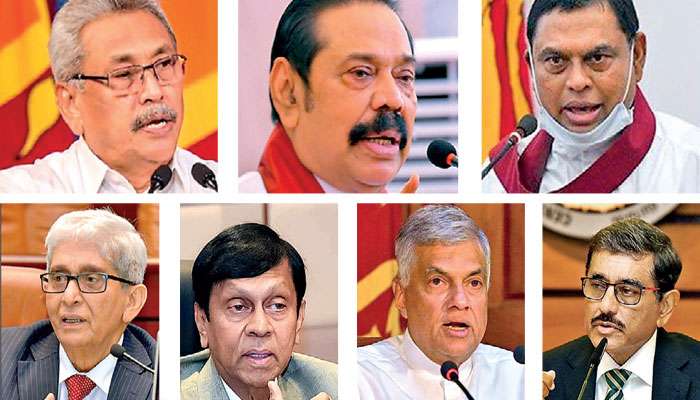 It started with Gotabaya Rajapaksa (GR), the strong man president who like a wizard promised “vistas of prosperity and splendour” through an undefined alternate development path. In the end, that path turned out to be a highway to economic disaster.

Prime Minister Mahinda Rajapaksa (MR) who was also the Minister of Finance took up the task of financing GR’s highway. Eventually, it became too hot to handle and soon imported his other sibling Basil Rajapaksa (BR) from US to take over that task. BR, an imported wizard, hastily presented a so-called development budget and flew immediately to India without even listening to the debate over his budget in the parliament and begged for funds to cover his budget deficit.

GR’s alternate path and vistas of prosperity, which was to be funded through deficit budgets and borrowed funds, surprisingly had a veneer of intellectuality when the handpicked Governor of CBSL, Professor W.D. Lakshman (WDL), publicly defended that path as a critique of neoliberal economics. All this drama took place in a depressive global environment created by the COVID pandemic joined later by the war in Ukraine.

To the regime of course, the pandemic and Ukraine war became scapegoats to shift the blame. In reality though, GR, MR, BR and all their economic and financial wizards, ignored warnings of an impending bankruptcy by experienced economists at home and abroad and by international institutions. Not only did they ignored those warnings but even ridiculed the warners as doomsayers. What happened afterwards is public knowledge.

Economic chaos inevitably led to public protests and created political instability. A young and awakened generation of Sinhala Buddhists demanded GR to go home and all 225 parliamentarians to quit. More about this later. Unable to face the chaos, MR and BR resigned and NC was sacked. A beleaguered GR was looking for a new wizard to tackle the problem. His eyes fell sympathetically on the former Prime Minister Ranil Wickremesinghe (RW) who has a dubious record of a weak leader in times of trouble. He emerged as the protector of Rajapaksas and earned the nickname Ranil Rajapaksa among critiques.

Under his premiership a so-called All-Party Government was formed and strangely enough there was no one within the ruling party to accept the finance portfolio. RW had no alternative but to accept that responsibility too. No sooner the new wizard took up that portfolio, he warned the people that things would have to get worse before getting better, and on that point, he was deadly accurate. Long queues for essential purchases are continuing and the country is almost at the verge of acute food shortage if not starvation, and the next rice harvest does not look promising.

Finally, to add further vigour to the ongoing economic jihad, a new financial wizard, Dhammika Perera (DP), had been admitted through the backdoor as Minister of Technology and Investment Promotion. He happens to be one of if not the richest individuals in the country, according to reliable sources. But whether he is also the highest income taxpayer is another matter. But he is expected to attract foreign investment to flood the economy and boost growth. One has to wait to see whether his wizardry would be realised.

In sum, over the last two to three years, there had been a parade of wizards from GR to MR to BR, RW, and DP, and from WDL to NC and NW each expected to possess a magical wand to produce economic miracles and regain the lost paradise. Yet, none of them seems to have had the wisdom or the courage to question the very foundation of the system on which the politics and the economy of the country are structured. Surprisingly and pleasantly, that questioning has arisen from an unexpected quarter in the form of Aragalaya. More about this later.

There is no better term than St. Augustine’s Christian concept of original sin to describe what happened in Ceylon soon after it was gifted with political independence by the British in 1948. Instead of building a united nation of Ceylonese from the island’s inherited multicultural polity, as Singapore demonstrated later, the elite who received that gift started redefining Ceylon and Ceylonese in terms of ethnicity first and language and religion later. That redefinition was carried out in the interests of the dominant Sinhala-Buddhist community.

Michael Robert’s equation, Ceylon = Sinhala and therefore Ceylonese = Sinhalese came to determine the democratic paradigm of parliamentary system of government based on the Westminster model. Renaming Ceylon as Sri Lanka did not change the substance of that equation. That was the original sin which snow balled over the last seven and half decades to produce series of political landmarks in the shape of racial riots, ethnic pogroms, and a civil war, all of which epitomised the redefined national identity and created an ideology of Sinhala-Buddhist majoritarian supremacy. Robert’s “Where Majoritarian Part Subsumes the Whole: The Ideological Foundation of Sinhala Extremism” (Thuppahi Blog, July 28 2016) captures the essence of this sinful transformation.

The innate evil emanating from the original sin continues to bedevil the fortunes of this blessed island said to have been visited by the greatest humanist of all times, Gautama the Buddha, who had left his footprints at Samanalakanda. His followers, step by step and via systematic political, administrative, educational and economic measures ignored Buddha’s humanism and bent on reducing the status and role of ethnic and religious minorities of the country – India born Tamils, Ceylon Tamils, Burghers, Christians and Muslims. These minorities are now being treated by supremacists as subclass citizens. Even the democratic principle of one person one vote was made meaningless with the introduction of JR’s proportional representation system to protect Sinhalese supremacy.

What this meant in economic terms was the planned disconnection of almost 30% of the country’s population from mainstream development and its benefits. GR represents the very embodiment of this disconnection. To the wizards mentioned above this does not seem to be an issue. They may even counter this observation by pointing out that the minorities are visibly seen occupied in all sorts of professions and ventures and they are therefore part of the economic community. This optical illusion backed by statistics belies a fundamental truth in economic development. Without the collective synergy of the total population of a country no economy could operate at its optimum. This is why population should be considered as an invaluable asset to an economy rather than a Malthusian liability.

If a country like Bangladesh, with 173 million people and which was not even in the world map when Sri Lanka gained its independence, could reach a position of being a net lender to a country like Sri Lanka, why could not thus fertile island with 22 million people and with a proud record of being a food supplier to India in the past, be in this tragic situation? If tiny Singapore with 733 km2 and 6 million people could welcome 20 million tourists in 2019, why Sri Lanka with 65,610 km2 starved of tourists? In both Bangladesh and Singapore people are united as Bangladeshis and Singaporeans rather than as Muslims, Hindus, Christians, Chinese, and so on. The collective synergy of their people propels national productivity.  A system that intentionally divides and disconnects a substantial section of that population is a system that commits economic suicide. This is what has happened in blessed Sri Lanka after independence. Unfortunately, all these wizards, without any exception, happen to the products of that system, and they do not seem to possess the wisdom or courage to question the systemic dismemberment of part of the nation’s population.

At last, after 74 years of unchallenged reign that system built on ethno-religious supremacy has come under challenge, and that challenge has arisen from the children of the very community to whose benefit that system claimed to have operated. This new generation of young Sinhala Buddhists is qualitatively different from its counterparts in previous times. These young men and women are educated, in touch with developments outside the country, critical minded and are not gullible to the preaching of hatemongers in their community.

They have witnessed within their lifetime how their leaders while acting as guardians of Buddhist Sasana and Sinhala-Buddhist hegemony had created a pernicious system with which those leaders had systematically looted the national economy, brought misery to people and behaved as a class of untouchables beyond the reach of law. This is why the youngsters had started the Aragalaya with a demand for systemic change. Thus is the long-awaited silver line at the end of dark clouds covering Sri Lanka. One should not forget that this new generation is also quantitatively larger as a voting bloc.

The guardians of the system would certainly fight tooth and nail to destroy the Aragalaya and continue with the ancient regime. MR and his goons tried that on 9 May and failed. They will try again in a more organised way and perhaps with support from State security apparatus. BR in the meantime, is deceptively describing his fiscal measures as the beginning of systemic change. In actual fact, those measures and the forthcoming IMF reforms are to strengthen the existing system and not to change it. Aragalaya demands more than those reforms and they go to the very ideological foundation of the system.

It is to the credit of these youngsters that they have not aligned with any political party. However, they cannot remain apolitical indefinitely. Politics is a necessary evil of our time. Therefore, they have to reach out for a workable partnership with likeminded political organisations. There a few if Aragalaya cares to look around. Pragmatism and not theoretical dogma should guide its political behaviour. This is an opportunity too good to miss. Alternative is continuous chaos and loss of the country’s sovereignty. In short, Aragalaya promises redemption from the original sin.