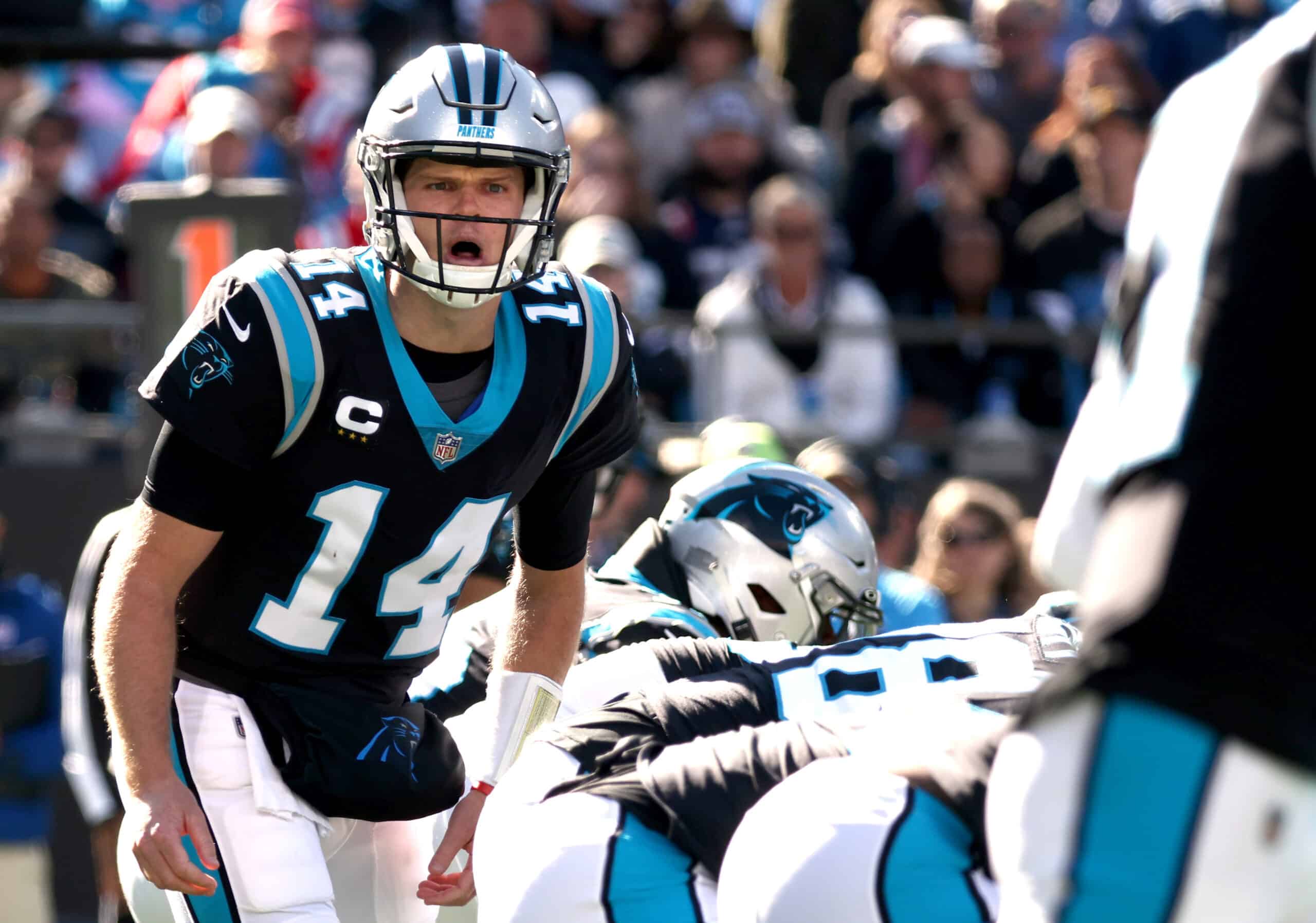 The story of Carolina Panthers quarterback Sam Darnold turned from a fairy tale to disaster with a snap of a finger.

He started strong and led the Panthers to three straight victories to start the season.

Darnold looked like an improved player after his disappointing stint with the New York Jets.

But his feel-good story turned into a nightmare as the Panthers lost five of their last six games.

DJ Moore and Robby Anderson spent most of the second half beside PJ Walker while avoiding Sam Darnold. There is no chemistry and he needs to go. #panthers pic.twitter.com/L32mdFbTlH

The former USC stalwart threw several interceptions, and his body language exuded a lack of confidence.

His incomplete fracture on his right shoulder blade might be the reason for his depressing performances.

However, he started to play poorly in Week 4 and never bounced back.

What’s certain is that his future in the league doesn’t look bright.

Cam Newton Will Push Him For The Starting Role

It doesn’t look like a tight quarterback battle because Cam Newton is still a fan-favorite among the Panthers’ hopeful.

He may not be the best quarterback they could get, but he’s still the heart and soul of the franchise.

Newton’s return also brings back the team’s identity as the players get an emotional boost to play better.

Sadly, it would be hard for Darnold to match what Newton means to the team.

Cam Newton showing up at the Panthers stadium like pic.twitter.com/ruuRxlvNh0

Even if the former league MVP struggles, the fans will still cheer for Newton.

Therefore, that attachment puts Darnold at a disadvantage when he competes for the starting role next season.

His questionable performances do not help his cause either.

Darnold’s chances of starting another game for the Panthers look bleak because Newton is still the better quarterback between them.

If the former Auburn standout can lead Carolina to a winning season, even if it’s 9-8, the starting role is his to lose.

There’s a chance that Newton will play out his NFL career where it started before walking off into the sunset.

That grim reality makes Darnold nothing more but an overpaid backup who will earn around $18 million in 2022.

P.J. Walker might even overtake him on the depth chart, limiting his playing time further.

It’s hard to see that happening any time soon with the Panthers, granted that Newton remains healthy.

Darnold’s inconsistency inflicted so much damage that head coach Matt Rhule cannot find any reason to keep him as the starter.

The Panthers do not trust his decision-making, so they had to bring in Newton in their midst.

Therefore, Darnold will ride the sidelines next season and get to play if something happens to Newton and Walker.

The amount of draft capital spent on Sam Darnold has been pretty incredible hasn’t it? Jets wound up using a 1 and three 2s to draft him. Panthers spent a 2, 4, and 6 to trade for him after the jets gave up on him. That has to be close to a modern nfl record for a non-star.

Next season could be Darnold’s last with Carolina because they will find no reason to re-sign him.

Accepting his fifth-year option was a massive mistake after his strong start.

As the season progresses, he’s nowhere near that quarterback that showed promise early in the season.

But this does not mean his NFL career is over.

Signing Cam Newton is exactly the kind of move I would make if I was trying to make everyone forget I gave up a second round pick for Sam Darnold.

Another team will sign him but more as a clipboard manager.

It would be hard for him to shake off the on-field blunders he made in Carolina.

That said, Darnold might be on his way to becoming a career backup quarterback because he whiffed on his first two stops.