The legendary Bert Newton has been remembered as ‘a master of his craft, a pioneer and an icon’ as the nation farewells the much-loved TV star in a state funeral in Melbourne.

Up to 500 close family, friends and colleagues are in attendance at St Patrick’s Cathedral service this morning. 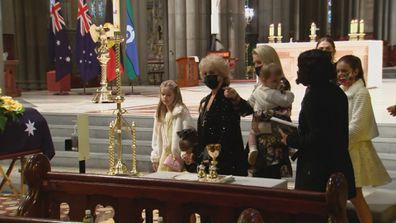 Victorian Premier Daniel Andrews delivered a poignant speech at the beginning of the service, describing Bert as a “pioneer, an icon, a legend” of television.

“Bert Newton was a great entertainer and life itself was his stage,” he said.

“He was always there, omnipresent on our screens and in our homes.

“To Australia, Bert wasn’t just a man on a screen or an actor on a stage, he was someone we all felt we knew.

“Like a fireplace on a cold night, families would gather around their TV sets, drawn in by Bert’s warmth and sustained by his inviting ease.

“Bert was more than talent. He was trust. His story is the story of Australian television.”

“He had a supreme talent, a gift indeed – and when things went off script, when a show went off the rails, Bert thrived.

“He was in his element – witty, clever, cheeky.

“A master of his craft, but true to himself at the same time. A highly-skilled, genuine and authentic entertainer.”

Tears as loved ones arrived at cathedral

Loved ones arrived at Melbourne’s iconic cathedral to farewell the TV legend, earlier this morning including his wife Patti who gave a heartfelt wave to cameras as a number of well-wishers yelled out words of encouragement to her outside the gate.

She was joined by daughter Lauren with her husband Matt and their six grandchildren.

Speaking outside the cathedral, TV personality Eddie McGuire said he was deeply honoured to be reading the eulogy.

“Through my career, Bert reached out to invite me into his club,” he said.

“And today it is a tremendous honour on behalf of the family and all those people to say a few words in his honour.”

‘We learned a lot from Bert’

TV personality Daryl Somers said his dear friend Bert would leave behind a legacy of smiles and laughter.

“We learned a lot from Bert,” he said.

“His legacy was making people laugh and you couldn’t want for a better legacy.”

Mr Somers added that Patti had been “amazing” and always supported Bert throughout his career and in life.

“She is heartbroken of course, but she’s an amazing woman and was always great support for Bert.”

Actor Paul Hogan remembered his long-time friend ahead of the service on the Today Show this morning.

“Bert was to me Mr Television,” Mr Hogan said from Los Angeles.

“He’s the first sort of person I can remember from television and he was always so good and so professional. He’s irreplaceable.”

Newton had been battling complications since surgery to have his leg amputated in May.