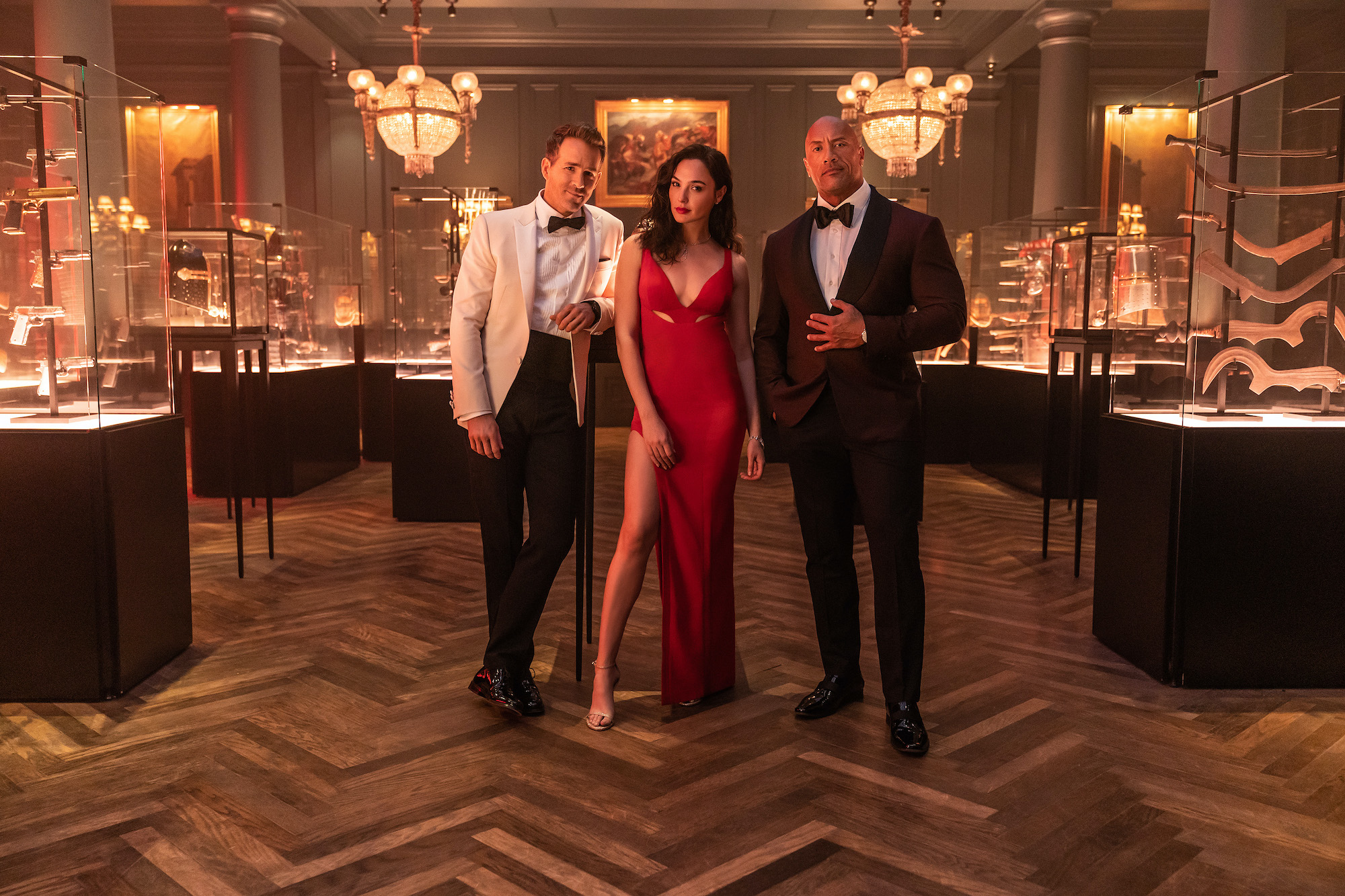 Netflix’s Red Notice starring Ryan Reynolds, Gal Gadot and Dwayne Johnson has finally arrived. We sit down for a very special interview with the cast.

As stated by Forbes, Red Notice is said to be Netflix’s biggest investment in a film to date. Written and directed by “Central Intelligence” and “We’re The Millers” Rawson Marshall Thurber, we can understand why talented star-studded names like Reynolds, Gadot and Johnson are featured in this film. Due to their existing off-screen friendship and Johnson’s past work (Skyscraper and Central Intelligence) with director Rawson Thurber, it shows how simple it was for the trio to agree to be in a major film like Red Notice.

What you need to know about Red Notice

Red Notice takes the audience on a whirlwind adventure filled with crime-fighting action and amusing humour, hunting for the world’s most wanted criminal. In this case, Agent John Hartley (played by Dwayne Johnson) is an FBI top profiler on the hunt for two of the most wanted art thief, Nolan Booth (Ryan Reynolds) and “The Bishop” (Gal Gadot). However, his mission comes to a halt when Agent Hartley is forced to team up with art thief Nolan Booth to stop “The Bishop”. Can this unusual partnership solve the case? You will have to tune in to find out.

Luckily for us, we managed to chat with the ‘Red Notice‘ co-stars on the highly-anticipated film.

Ryan, how did you prepare for this role?

Ryan Reynolds: What Netflix wanted to put together here was they wanted Dwayne, Gal and I to have a kind of off-screen friendship and camaraderie that same thing you see on screen. They wanted that to transfer over to Red Notice and be a part of the DNA and fabric of the storytelling. If you come to dinner with Dwayne and me, you will see we talk to each other in Red Notice, and it’s pretty funny to be around, and how it’s always been for us, so putting up that on the screen was an absolute pleasure.

What would you say was the most exciting scene to film?

RR: There’s a sequence in the chapel in the prison where we meet Gal’s character as The Bishop for the first time. I would say, that was probably the most exciting scene to shoot for me because it was the first time all three of us had shot together in one room. The whole scene was like a chess game.

If you were an accomplished art thief like your character, which piece of famous art would you want to get your hands on and why?

RR: I wouldn’t want to steal it, but if I had to steal a piece of art, it would be ‘The Woman in Gold’ by Gustav Klimt. I did a movie about that same painting years ago with Helen Mirren called The Woman In Gold, and that’s a beautiful piece of art.

The bromance between you and Dwayne’s character in the movie is impressive. Can you share with us how you built that bond with each other?

RR: Over some gin and some tequila. Weirdly, Dwayne and I have a lot more in common than you’d imagine. Certainly not body mass. But you know, we each have three daughters. We have extracurricular businesses that we care deeply about. We both feel very much we’re in service of an audience and that they’re the boss. And so we have very similar outlooks on everything. So there was the camaraderie you see on the screen is a natural byproduct of two guys who have known each other for a long time and have similar work ethics and outlooks on life.

Did you improvise a lot of the jokes, or were they mainly in the script?

RR: I improvised a lot of the jokes, yeah. I mean, that’s my job. I think it’s a little bit of a stretch to say improv or improvise because I write a lot of the jokes, you know, I write eight or nine options for each joke, and I leave it to the editor and the director to decide which ones they feel are suitable for the movie. So I like to give them a whole bunch of options.

Gal and Dwayne, what made you say yes to be in a film like ‘Red Notice’?

Gal Gadot: Dwayne and Rawson Marshall Thurber, our wonderful director and writer. When he first pitched me the idea for the movie, I was blown away by the ambitiousness and how surprising the story is. And I was also very intrigued to play a character who’s a bit different from what I usually used to do.

Dwayne Johnson: What my amazing co-star just said, I love the idea that she, Gal, in particular because it was always Gal, who Rawson had in mind and the moment he said her name. I said, Well, I love her. She’s one of my favourite human beings. She’d be amazing in this, is the idea that she plays the most wanted art thief in the world, and that automatically is intriguing to me as a movie fan, Gal Gadot in that.

Many fans are excited to see your intense action scenes; what makes action sequences in Red Notice special?

DJ: I think what makes them unique, and Red Notice is their intention, and we intend to try our best to raise the bar with our action sequences. We are all no stranger to action from Gal with everything she’s done in her career. Myself and Ryan, too, as well. So to try and raise the bar in action sequences is not easy to do. It’s challenging. It isn’t easy because there’s a lot of great action out there and a lot of excellent action storytelling. So it was our intention. I think that separates us and tries to thread the needle of great action with a little bit of levity in every piece of the action. That’s why you’ll see in our movie as heightened as intense as our action sequences are.

There’s a scene where you dance with The Rock. How does it feel to dance with someone like him?

GG: I was a bit nervous initially because DJ is a giant man, and I have feet down there, so I wasn’t sure what would happen. And I kept telling DJ; we’re going to practice, we’re going to rehearse. And he was super cool, kept on calming me down and saying, don’t worry, this will be great. Of course, that just made me more nervous. But then he showed up, and this guy is a freaking ballerina. I don’t know how it works with physics, but he’s so talented and such a good dancer.

The ending caught us off guard with a surprising twist of events. What was your reaction when reading the script and working on this project together?

GG: It was amazing. Rawson did an amazing job writing the script and directing this movie, and re-engineering this type of heist movie. There’s so much to it. He managed to make it on its own as he got inspiration from different films from the past. I think that the wit and moments are fun, especially when the boys are in the movie. So what else can one ask for?

DJ: I love the surprise. And that’s the thing too. If you could surprise an audience today, audiences are very savvy, and they could call the movie generally. We were able to surprise the audience here and take them on a twist twisting journey that ended with a great surprise that they couldn’t call. So I loved it.