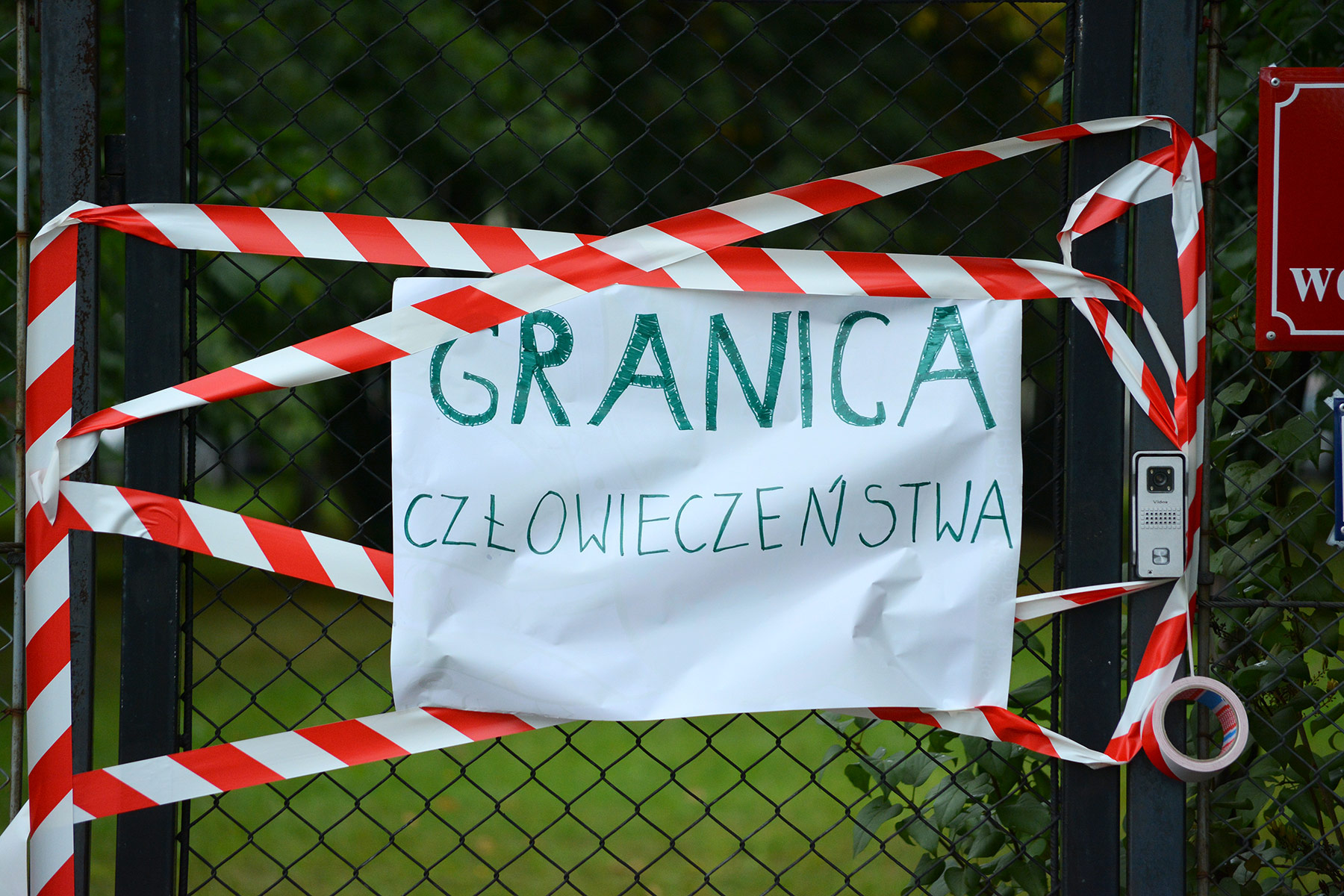 Hundreds of people stand in front of a barbed wire; some try to force it. Behind them are troops encouraging them to break the fence. On the other side are border security guards, ready to push them back.

This is a scene from the border between Belarus and Poland, the EU’s eastern frontier, on November 8. People who are trapped between security forces pushing them back and forth had been flying from the Middle East to Belarus in the past weeks, unaware that they were being used by President Alexander Lukashenko for his personal vendetta against the European Union.

The current crisis has its roots in the aftermath of a highly contested election in August 2020 when Lukashenko was proclaimed president of Belarus for the sixth consecutive time since 1994. Neither the EU nor the US recognized the result because the vote, like almost all preceding ones, was assessed as neither free nor fair by the international observers. Electoral fraud triggered widespread demonstrations across the country that were brutally suppressed by the regime. By November, some 25,000 have been arrested, including 477 journalists, with widespread allegations of torture in detention.

In response, the EU imposed sanctions that include a travel ban and an asset freeze against those associated with the regime and which, as of June this year, extend to 166 individuals and 15 entities. Relations became further strained in May when Belarus used a false pretext to intercept a plane flying from Greece to Lithuania and arrested a dissident journalist who was onboard.

Consequently, sanctions were tightened, and an infuriated Lukashenko threatened with reprisal: “We were stopping drugs and migrants on our Western border. Now you will eat drugs and chase people. … Because of your sanctions, we have no money to take care of this.”

Lukashenko had seen how the migration crisis of 2015 polarized EU member states, with Visegrad Group countries — Czech Republic, Hungary, Slovakia and Poland — opposing non-EU migration and refusing relocation of asylum seekers. From Turkey, the Belarusian president may have learned how to use refugees to put pressure on the EU. But Lukashenko, whose authoritarian rule earned him the moniker “the last dictator of Europe,” went one step further, intentionally flying in thousands of people to Belarus to use them in his game against the EU.

Already in June, Lithuanian border guards observed a sudden surge in illegal crossings by people from Africa and the Middle East. Until early July, 938 migrants tried to enter Lithuania’s territory illegally — 12 times as many as in the whole of 2020. Soon it became obvious that it was no coincidence: The number of flights from Middle Eastern countries to Minsk, the capital of Belarus, had intensified. Passengers were taken by buses and taxis to the border and assisted by Belarusian border guards; local travel agencies were also apparently involved.

It is estimated that at the moment, between 800 and 1,000 people from the Middle East land in Belarus every day, with German media reporting up to 40 flights a week from Istanbul, Damascus and Dubai planned by March next year.

Lukashenko’s regime targeted people from fragile countries and lured them with a prospect of easy and legal entry to the EU. This was a costly endeavor. Depending on the port of departure and destination, the price per person amounted from $6,000 to $15,000. Many migrants seem to have believed that Minsk was just a layover and that they would soon board a plane to Germany. They traveled with their entire families.

As the number of attempts to cross the border illegally was increasing disproportionally fast, Lithuania declared a state of emergency on July 2. Lithuania and neighboring Latvia, with populations of 2.8 million and 1.9 million respectively, feared that they would not be able to cope with a sudden influx of migrants. In mid-July, Lithuania’s foreign minister asked the EU to take more decisive steps against Lukashenko, invoking a “hybrid threat” and suggesting refugees being used as a “political weapon.”

Latvia declared a state of emergency on August 10; Poland, with a population of 38 million, on September 2. All three states began building fences along their borders.

But all these measures did not halt the pace of illegal crossings. The statistics published by the Polish Border Guard Office show that in August, nearly 2,900 people tried to cross the border; between early August and November 4, the attempts numbered 30,000.

On November 8, as the situation at the Poland-Belarus border escalated, an estimated 3,000-4,000 people were in the vicinity of the border. A column of hundreds of people marched toward an official border crossing in Kuznica, but most were diverted by Belarusian forces to the nearby forest.

Polish forces used tear gas to stop some of the migrants from cutting the fence. As passing was impossible, hundreds set up makeshift camps along the border. Polish official sources estimated that there may currently be as many as 15,000 migrants in Belarus — the same as the number of Polish troops deployed to protect the border.

No Media, No Frontex

Although all affected countries implemented similar measures, Lithuania and Latvia allowed the media to enter emergency zones, under certain restrictions. Poland barred non-resident civilians, including journalists, from the zone and restricted access to public information, a move criticized by Reporters Without Borders and other press freedom organizations.

All information from the Polish state of emergency zone (SEZ) is provided by the authorities, local residents or, perhaps ironically, the Belarusian regime. Considering that journalists are almost always present in most active war zones and conflict areas, this is quite an unusual situation.

From the outset of the crisis, Poland has been carrying out pushbacks, a practice of forcing migrants to return to Belarus. According to UNHCR, pushbacks are a breach of international law, but the Polish parliament legalized them in October. Lithuania initially placed migrants in detention centers but soon then followed Poland’s example. In mid-August, more than 4,000 people were in Lithuanian detention centers, with 1,500 people were in detention in early October in Poland.

The affected countries differ in their cooperation with Frontex, the European Border and Coast Guard Agency headquartered in the Polish capital Warsaw, which controls borders in the Schengen Area. Frontex deployed its personnel to Lithuania and Latvia, but Poland repeatedly refused help because, as it claims, it had enough troops to protect the border. Polish officials emphasized that Frontex Director Fabrice Leggeri was “impressed by the means deployed to secure the border” in Poland.

But Frontex does more than protect borders. It has developed a special code of conduct to protect human rights and created the role of a fundamental rights officer, who monitors border guards to reduce the potential for violations of the rights of migrants.

In their attempt to reach Poland, migrants often have to cross swamps and forests, facing adversarial weather conditions; temperatures in November drop below 0˚ Celsius (32˚ Fahrenheit). Most of them wander for days or weeks, pushed back and forth repeatedly. They cannot expect assistance from humanitarian organizations, NGOs or doctors because they are barred from the SEZ. Local residents are also prohibited from helping, but many admit that they do so regardless.

In order to offer assistance to the migrants, 14 Polish NGOs formed Grupa Granica — Border Group — to monitor the situation close to the SEZ. They have documented many pushbacks, with one case in particular resonating with the public. The incident involved a group of 20 migrants, among them eight children, who in late September managed to reach Michałowo, a small town outside of SEZ. They claimed that they wanted to seek asylum in Poland. Nevertheless, they were driven off to Belarus as the entire interaction was recorded by activists and journalists.

This led to protests in Warsaw and Michałowo, supported by three former Polish first ladies. The protesters chanted, “Where are the children?” and “The place for children is not in the forest.”

The EU unanimously condemned Belarus for “deliberately putting people’s lives and wellbeing in danger” and “gangster methods.” President of the European Commission Ursula von der Leyen declared that in response to the “hybrid conflict” sanctions on Belarus will be widened. However, Russian Minister of Foreign Affairs Sergei Lavrov stated that the EU should pay Belarus for stopping migrants.

Nevertheless, the EU is not open to such negotiation and relies on diplomatic international pressure and sanctions. Current attempts are directed at convincing the countries of origin to warn migrants against traveling to Belarus or to sanction the airlines who fly them. Turkish airlines already agreed to reduce flights to Belarus while Iraqi authorities offered to fly back people who agree to return.

Demands for harsher sanctions and complete closure of borders can also be heard. Such a move would paralyze international trade routes and have an impact on Russia and China — Belarus lies on China’s New Silk Road — that use Belarus for transit of its goods. But sanctions are a double-edged sword, having a detrimental impact on those who impose them.

Lukashenko seems to have fewer ways out of the crisis, and many point out that he will have to surrender as the cost of his political gambling is becoming too high. There are also concerns that, in desperation and given his unpredictability, the Belarusian president may start an armed border conflict.

If Lukashenko wanted to divert attention from Belarus’ domestic affairs, he succeeded. In the past weeks, reports on the crackdown against the opposition have disappeared from international debate. If sanctions are tightened and borders closed completely, not only the regime but also civil society will pay the price as Belarus becomes even more isolated.

The situation at the Poland-Belarus border is very dynamic and, in some respects, resembles a proxy war. It is where the EU and NATO encounter Russia’s sphere of influence, with Polish politicians openly accusing Russia of orchestrating the crisis.

Whether legal or illegal, migrants should not be used as pawns or human shields in a geopolitical game. As desperate migrants look for other routes to enter the EU, the crisis may soon spill over into Ukraine, Belarus’ southern neighbor.Poland, Lithuania and Latvia have already joined Alexander Lukashenko as he plays with innocent lives.

But while the often-ridiculed Lukashenko managed to unsettle the EU, he has not so far succeeded in further polarizing it. Despite the breach of international law at its border, the EU stands firmly together behind Poland, Lithuania and Latvia. Time will tell if this unity remains as the crisis evolves.

*[Fair Observer is a media partner of Institute for the Danube Region and Central Europe.]