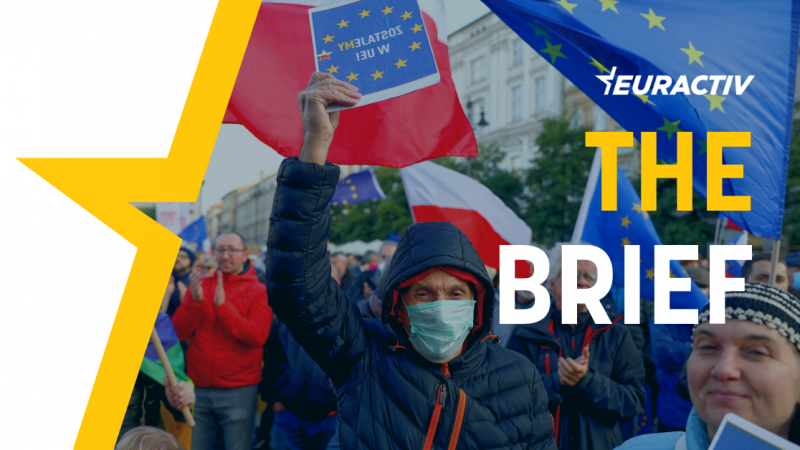 According to PiS, talking up Polexit is in fact a political strategy of the Polish opposition led by Donald Tusk, a former president of the European Council, who wants to use the EU’s popularity in Poland to gain support for his party.

Around 90% of Poles don’t want Polexit, including 87% of PiS supporters, according to one poll. All opinion polls suggest that the EU enjoys massive support in the country, ruled by nationalistic governments since 2015.

Paradox? What do you call it if nobody apparently wants it and it still may happen?

The Polish leader stood his ground, defending the idea that his country is discriminated against and that the European Court of Justice is guilty of some unfair “judicial activism”.

On the other side, a great majority of views expressed in the hemicycle, and echoed by Commission chief Ursula von der Leyen, are singing a very different tune.

Poland is not discriminated against and we are in a fight to restore the rule of law principle in the country, which has compromised its judicial independence, they say.

So, are we witnessing discrimination or the dismantling of core values? Clearly, the Polish government is developing its narrative on fighting anti-Polonism, be it in Western Europe, Russia, the United States, or Israel.

The Polish government is also in the business of nourishing the pride of its own electorate in smaller towns and villages.

Clearly, what PiS wants to achieve is to continue consolidating its support ahead of the difficult times ahead: rising inflation, uncontrollable energy prices, and green transformation. Clearly, PiS is not in the business of “fixing the judiciary”.

Why not? Internal politics is the answer.

Morawiecki and Kaczyński may not want Polexit. But Justice Minister Zbigniew Ziobro and his entourage may pursue a different argument: that EU membership may no longer be beneficial, and that the only ones who benefitted from membership are free-riders.

Ziobro’s MPs and MEPs are openly talking about Polexit. Yet, Jarosław Kaczyński needs them to maintain the slim majority in the parliament for the Morawiecki government.

How stable is the pro-EU sentiment of the general public? The national public television TVP is a recognized anti-EU propaganda machinery, broadcasting misinformation inspired by Fox News.

In fact, a great majority of the pro-EU support among the Polish public is conditional. The support for EU integration is linked with the exceptional economic growth the country has experienced since its accession in 2004. Should recession come along, who knows who will be to blame for it?

There are also other issues that may derail public support. The most important of them is energy prices, and not so much the galloping gas prices of today.

It is more about the cost of CO2 emissions, which has been growing this year. More generally, it’s the high costs of climate transformation, which means decarbonisation, one way or another. It’s the Turów case between Poland and Czechia, the closing of coal mines and energy powerhouses will remain controversial for years to come.

The blame for it will be put squarely on the EU.

Another important issue is the migration threat. As long as the Polish government and the EU institutions talk the same language, there is no problem. However, as the number of deaths on the Polish-Belarussian border grows, the issue may continue to deteriorate. In the past, in 2015 it was the migration scare that brought PiS to power in the first place.

No one knows for sure. But the threats are real. Many years ago, the independent Polish Constitutional Tribunal gave an answer to the question of what if there were a conflict between EU laws and the country’s constitution: You can change the Constitution, you can change the EU treaties, or you can leave.

Following the 7 October ruling of the Polish Constitutional Tribunal, those options are clearly on the table.

A message from EPRA: Join us online for the EPRA Virtual Sustainability Summit

While Polish Prime Minister Mateusz Morawiecki may not want Polexit, he stood firm on Warsaw’s challenge to the primacy of EU law in an emotionally charged speech before the European Parliament on Tuesday. “We are saying yes to European universalism, but we say no to European centralism,” Morawiecki said in Strasbourg, instead proposing EU legal institutional change.

Poland has also called for an in-depth review of EU climate policies, including the “revision or postponement” of the ‘Fit for 55’ legislation tabled in July. At an EU summit on Thursday, leaders will debate a proposed “toolbox” of measures put forward by the European Commission to address surging energy prices.

And China wants more trade dialogue with Europe, plus a multilateral approach to climate measures, the chairman of the Chinese Chamber of Commerce to the EU told EURACTIV in an interview. “When companies go abroad to boost their trade between China and the EU, they can get better revenues and better lives,” he said.

But trade between the EU and China is in troubled waters, as global tensions rise and climate change mitigation measures are destined to influence patterns of production and exchange. Check out EURACTIV’s special report on EU-China trade for more.

The EU began reviewing its national budget rules today, which will be tailored to fit the post-pandemic reality of higher public debt and the costs of transitioning to a zero-emissions economy. The landmark review is expected to take until the end of 2022 at least, as governments, economists and academics are also debating how to simplify the so-called Stability and Growth Pact.

Also on this year’s overflowing political agenda is the ever-changing issue of immigration, but the issues discussed above are taking precedence. However, this shift may be a chance for less contentious law-making on asylum and migration.

The EU has been contributing to the development of ‘surveillance’ capacities in third countries — namely in Africa and the Western Balkans — without considering fundamental rights and data protection, according to a coalition of privacy NGOs. “Tools coming from the EU are being used to wreak havoc across North Africa. It’s not a case of ‘out of sight, out of mind’ for the millions of people whose rights are in jeopardy,” said a MENA policy manager at Access Now.

And a French senator has proposed the creation of a digital identity supervisory body, which would require users of platforms like Facebook to have their official identity authenticated if they want to register. The proposed law “reminds us, once again, of the deep, legitimate and shared expectation of all Internet users to see an end to cyberbullying,” said the president of anti-cyberbullying NGO Respect Zone.