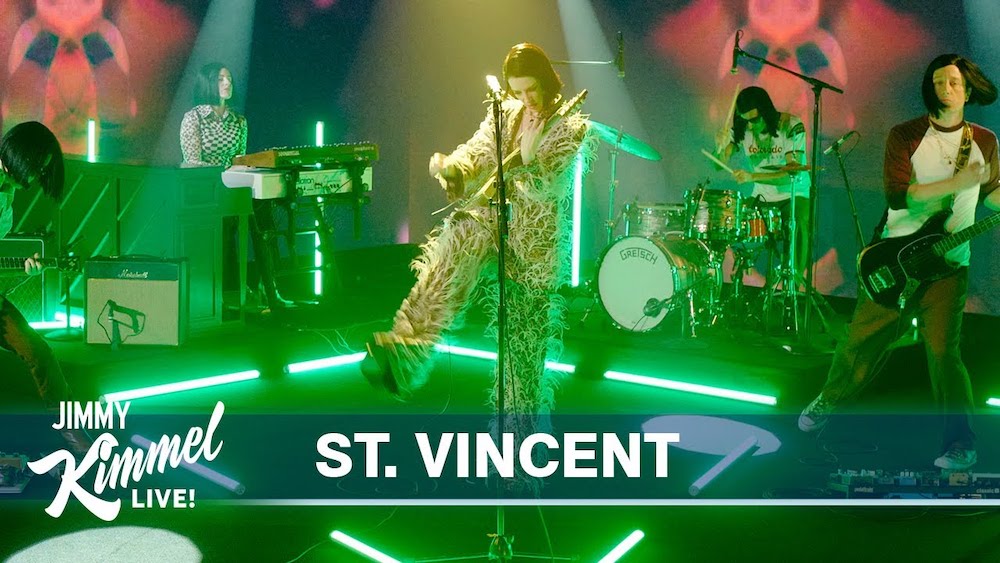 St. Vincent mastermind Annie Clark is having a busy year. First, there was the new album Daddy’s Home. Then, there was The Nowhere Inn, the sort of Lynchian mockumentary that she made with Carrie Brownstein, as well as that movie’s soundtrack. Lately, St. Vincent has also returned to the road, playing high up on the bill at a lot of festivals. And last night, St. Vincent were the musical guests on Jimmy Kimmel Live, where they performed “The Nowhere Inn,” the title track from the new film.

St. Vincent actually played in the Kimmel studio, which still seems like a striking spectacle after all these remote late-night performances. Clark made the most of her TV time, dressing in a striking ensemble that I can’t begin to describe. (Are those… feathers? Is she dressed like a chicken?) All of the members of Clark’s backing band all had the same haircut as her, too. Presumably, those were wigs. Why?

As ever, Clark is a performer. She knows how to hold a camera’s attention, and her little touches of showmanship — kicking over the crash cymbal at the end of the song, singing a final line away from the microphone — were cool. Watch the performance below.

Daddy’s Home and the Nowhere Inn soundtrack are both out now on Loma Vista.