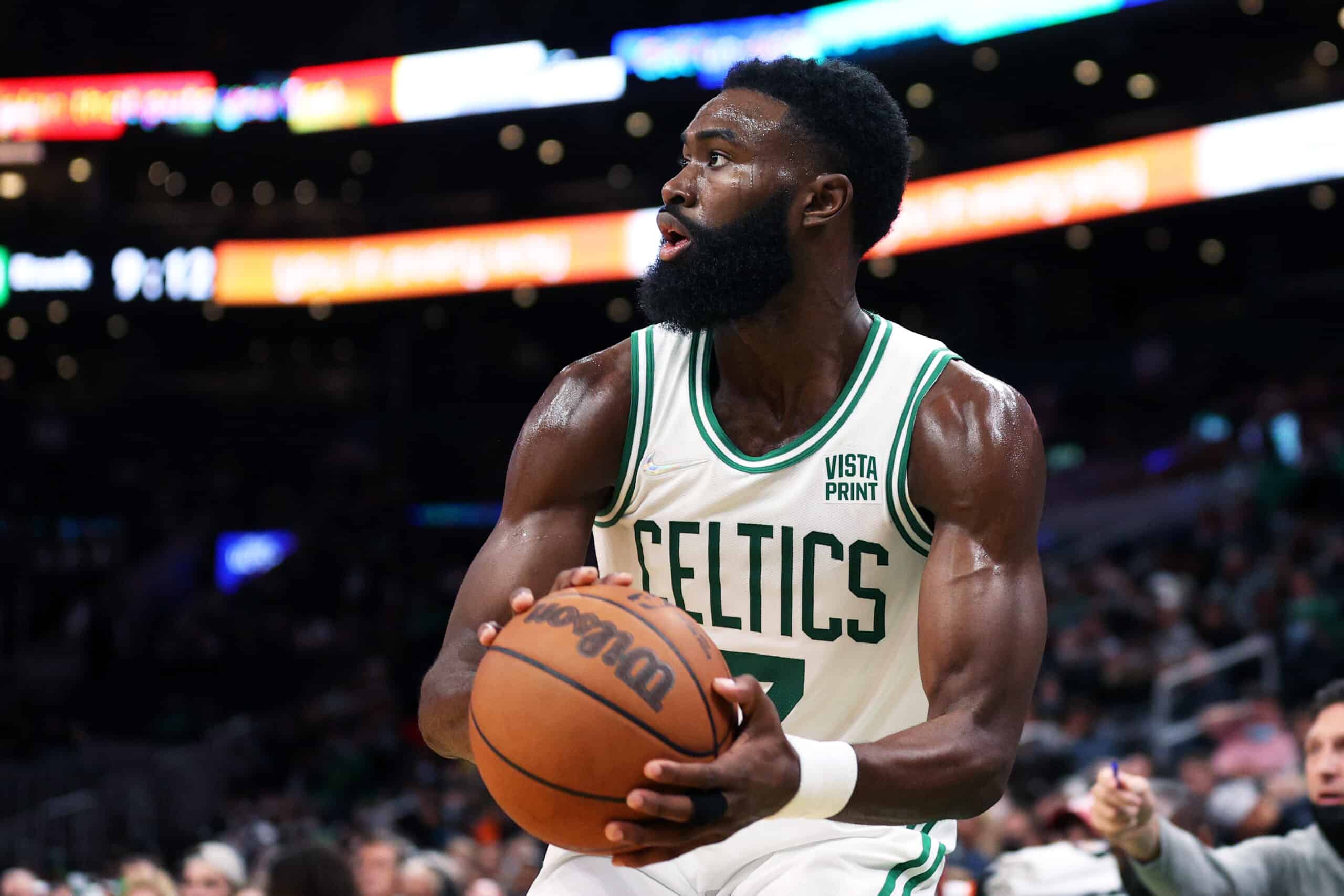 The Boston Celtics currently stand at 8-8, with Jaylen Brown missing each of the last seven games due to a hamstring injury.

He is out for Saturday night’s game as well.

He turned 25 years old on October 24, also a day in which he missed a game.

Thus far this season, the Celtics have the following record with and without Brown (note: small sample size):

Of course, it is very early in the season, but there have already been rumblings that Brown is on the trade block:

Celtics president of basketball operations Brad Stevens then had two words to squash the Brown rumors:

Heading into the 2021-22 season, the Celtics have played winning basketball since they drafted Brown.

In addition, Brown is already on pace for new career-highs in points and effective field goal percentage this season.

Until this year, Stevens had been Brown’s only NBA head coach.

Now with Stevens having a front-office role, will he be aggressive with trades and try to land a “Big Ticket” player like Danny Ainge did?

Boston has made the postseason in 13 of the last 14 years, but since the 2008 championship, the team has made it back to the Finals just once.

Since Stevens took over the team, the green has not been able to make it over the hump:

With this in mind, are the Celtics one piece away from a trio of Jayson Tatum, Brown, and someone else leading them to a championship?

Or should the Celtics be thinking about trading Brown?

The Celtics Should Not Trade Jaylen Brown

He and Tatum are ushering in a new era of basketball in Boston.

They are well-liked in the city and remind a Celtics Hall of Famer of his playing days.

Paul Pierce seems hopeful that the Tatum and Brown core can stay together for a long time:

.@paulpierce34 compares him and Antoine Walker to Jaylen Brown and Jayson Tatum playing together pic.twitter.com/In9josmzEY

Brown has yet to even reach his peak, and there are thoughts about trading him?

It is difficult to see him being sent packing, especially after hearing what Stevens said.

The Celtics Should Trade Jaylen Brown

Could Tatum and Brown be too redundant for a Celtics team that is still searching for a true point guard?

The obvious thought goes to the Celtics’ rumored interest in Ben Simmons.

Would Simmons be worth trading for to help Boston get closer to a championship?

The tough part about a potential Simmons trade is that it would most likely involve Brown.

Tatum and Brown could be a dynamic duo for the Celtics, like Pierce and Antoine Walker.

However, Pierce never won a championship with Walker.

Walker had to go elsewhere for his NBA championship.

He won in 2006 with the Heat, a team led by Dwyane Wade and Shaquille O’Neal.

The Celtics only were able to get to the next step after Ainge acquired both Ray Allen and Kevin Garnett.

So, are the Celtics at an impasse with Tatum and Brown?

This Celtics franchise has been stuck near the top — without a Finals appearance — or in the middle of the Eastern Conference for a while.

So, should the Celtics trade away Brown, who has been a part of these semi-successful Boston teams?