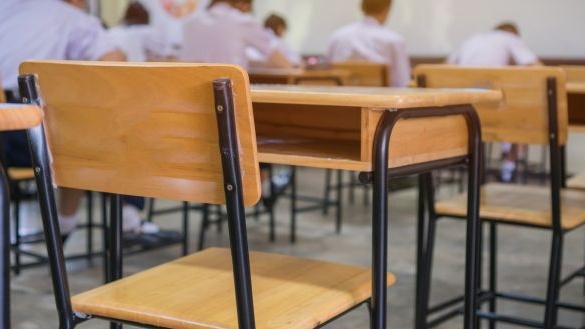 The general secretary of the Irish National Teachers Organisation (INTO) has claimed that schools have been abandoned by the Department of Health.

There were more children at home now because of Covid-19, John Boyle said, 9,000 had tested positive which meant there were probably 13,000 to 14,000 more who were asymptomatic.

Mr Boyle said he knew of 12 outbreaks in the Dublin area alone.

An INTO survey indicated that Covid cases in schools were high in Waterford and low in Kerry as was the case among the general population.

Mr Boyle told Newstalk Breakfast that 605 primary school teachers had tested positive for Covid-19 over the past two weeks which was leading to a shortage of teachers and meant that children were missing school.

“We are looking for solutions, but they have to come from the Department of Education and public health who have abandoned schools,” he said.

Mr Boyle called for more focus on ventilation in classrooms, more C02 monitors and filtration systems. Intervention was necessary so schools could remain open he said.

When asked about children wearing masks, Mr Boyle pointed out that they were mandatory for primary school children in France and Italy and he thought that with a little more encouragement children would wear masks.

Hiqa had indicated in August that it would look at mask wearing for children in primary schools, he said, that report was to have been completed in six to eight weeks, but it was now 11 weeks.

The fourth wave of the disease is leading to the cancellation of much elective surgery in hospitals.

Intensive care consultant Dr Andrew Westbrook has described the cancellation of a transplant operation at the Mater Hospital last week as “symptomatic” of the crisis caused by the lack of ICU beds.

The cancellation was symptomatic of the fact that the intensive care system in Ireland was under-resourced. There should be at least 550 ICU beds in the country, that was according to a report published 12 years ago, he said.

There had been a “slight increase” of 50 beds over the past year, there needed to be at least another 150 to 200 intensive care beds, that would just bring Ireland up to the “average” level in Europe.

“If we had that bed stock we could provide care for more acutely ill patients,” he stated.

Dr Westbrook pointed out that for every intensive care bed there had to be a fully trained team including at least six nurses.

Ministers are expected to consider retaining higher rates of financial supports for businesses at a special meeting today, in light of the deteriorating Covid-19 situation.

The Cabinet subcommittee on economics will receive an update on financial supports amid widespread infections across the State and new restrictions being imposed on businesses, particularly in the hospitality sector.

Industry sources said yesterday that restaurants, hotels and pubs had been hit by a huge number of cancellations of Christmas parties.

While a proposal is anticipated in relation to the employment wage subsidy scheme (EWSS), a number of sources said they did not expect the Government to reverse reductions in pandemic unemployment payment (PUP) from €250 a week to €200, which kicked in last week. Opposition parties have been calling for the higher rates to be restored.

The EWSS gives businesses impacted by Covid-19 a subsidy per employee to help keep them in work. Payments for each employee are due to fall to €203 per week on December 1st, from the existing rates of €250 and €350. For those receiving €203 at present, this is due to fall to €151.

The subcommittee – which includes the five most senior ministers in Government – will discuss putting a stay on those reductions until after the Christmas period.