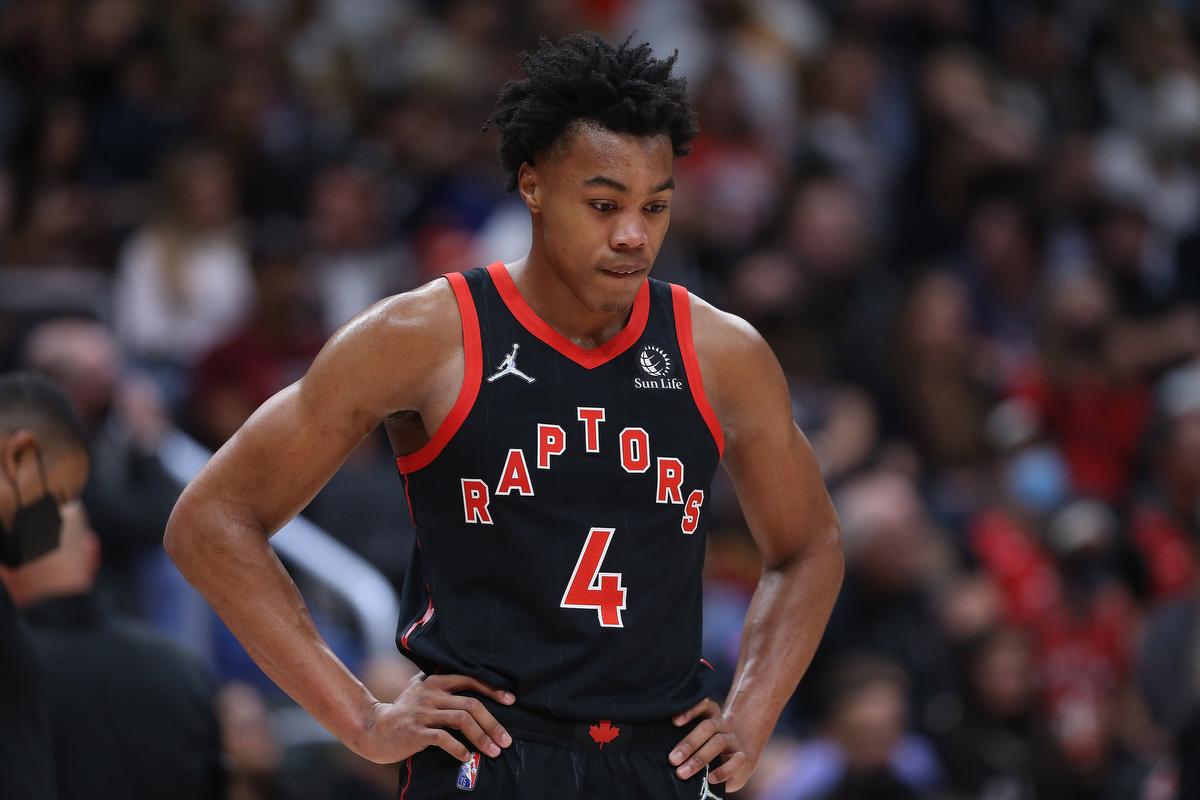 With the fourth overall pick in the 2021 NBA Draft, the Toronto Raptors select Scottie Barnes. This shocked many as it was widely opinionated that Jalen Suggs would be taking over for the long-time Toronto star, Kyle Lowry. Instead, the Raptors had other intentions. They decided to bank on the upside by selecting someone who had all the physical tools in the world to be great, but not as far along skill-wise. So far, he has silenced most of the haters as he is a top candidate in a loaded Rookie of the Year race.

The first thing that pops off is his size. He is a 6’7” forward with a 7’3” wingspan. He has good feet and a strong upper body. This helps him be an above-average defender right out of the gate. Having the ability to switch and guard all five positions has been a key factor as to why he has been so good on this end. Scottie Barnes ranks in the top 25 percentile in the league when defending P&R ball-handlers, P&R screeners, and dribble handoffs in large part because of his defensive versatility.

He brings that same fire on the offensive end as well. Barnes crashes the glass and puts constant pressure on the defense. It is almost impossible to question the kid’s work ethic when he is snagging 2.9 offensive rebounds a game (second among all forwards). Barnes not only has the power but the finesse too, averaging 15.1 ppg (third among all rookies). This is primarily because of his great touch around the rim. When driving left, he has shown incredible efficiency (91st percentile). This is due to his go-to move, when he spins back to his dominant hand (his right), allowing him to get a post hook over a shot-blocker.

Maybe the most underrated part of his game is his IQ. He is incredibly selfless and always seems to make the right basketball play. He came into Florida State as the starting point guard, because the coach trusted his decision-making. His rare intelligence for the game also helps him defensively. He understands rotations allowing him to be a great team defender.

The biggest area on the defensive-end Barnes must focus on is using angles to his advantage. In college, Scottie Barnes was able to play his man straight-up and beat him to the spot. Now, when he is getting switched onto NBA guards, he can no longer get away with that philosophy. Someone who is a great example of using angles is Bam Adebayo. He is one of the best because he dictates where the ball-handler should go with his hips. Barnes is a solid defender, but these are the types of differences that dictate whether he will be an average or one of the NBA’s elite.

While many people do not realize this, driving is still something he needs to improve. As teams are getting more tape on him, it is evident what his tendencies are. When driving right, the efficiency drops. Barnes will perform straight-line drives meaning he does not make any moves to create separation. This allows the shot-blocker to predict and contest the shot with ease. This affects his post-game too because he is not as effective when he is spinning back to his weak hand. Barnes needs to add more moves to his repertoire because teams will catch on. Adding a euro-step, hop-step, or spin-move to the toolbox will make him even more dominant in the painted area.

Surprise… Surprise… The last critique is the jump-shot. While Barnes has shot a mediocre impressive 33.8 percent from three this season, it is coming off of limited attempts. When you look at the tape, Scottie’s spot-up mechanics are pretty good. Solid base, respectable release point, but the issue lies simply in the rotation. I was fortunate enough to see him in the Las Vegas Summer League, and it was evident there was not enough rotation on the ball (meaning how many times does the ball go full-circle). Typically, good college shooters should have 2.5-3 rotations on a three-point shot. When I saw Barnes though, he was only getting about 1.5 rotations. Now, this has not been too much of an issue so far, but long-term it would benefit him to focus on his follow-through to get that rotation.

While Scottie Barnes still has a ways to go, it is remarkable he is putting up these numbers when it feels like he is still raw in many aspects. Barnes has a bright future because he has the work ethic along with a great coaching staff that is invested in him. Five years from now, (assuming he continues to improve in these areas) it is possible that instead of complaining why he got drafted so high, we might be asking ourselves why he was not drafted higher…

Thank You for Reading