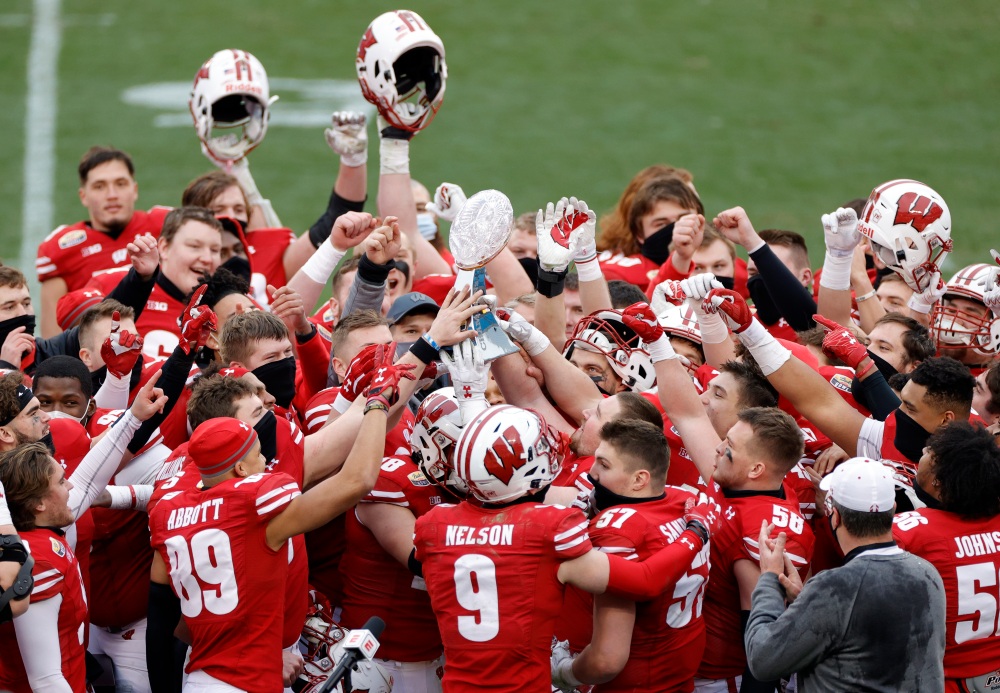 It’s been a wild season for the Wisconsin Badgers. From starting 1-3 to being on the cusp of going to the Big Ten Championship; the Badgers have seen it all in 2021. In week ten against Rutgers, the Badgers clinched bowl eligibility for the 20th year in a row; only Oklahoma and Georgia have gone to more consecutive games. With the season winding down, it’s hard to believe were a month away from bowl season. At 8-3 and close to punching their ticket to Indianapolis, it’s time to look at which bowl games Wisconsin can be invited too. So far, it seems as though the Badgers will be able to go to a warm weather destination this year.

The Outback Bowl seems like the game where Wisconsin has the best chance of being invited. The Badgers have been to this game four times and have a record of 1-3; although they did win in their last appearance in 2015 defeating Auburn. This was also the last time Barry Alvarez coached and Paul Chryst wasn’t on the sideline. If the Badgers make this game, they’ll have a good chance of taking on Texas A&M or Kentucky. Mississippi State and Arkansas are potential opponents as well. Playing Kentucky is very intriguing, it would mean the Badgers would face their former longtime running backs coach, John Settle. They’ve faced Kentucky once which came back in 1984. Wisconsin has also never faced Texas A&M or Mississippi State either adding to more story lines to the potential opponents.

The Citrus Bowl is also a possible destination as well. Formerly known as the Capital One Bowl, Wisconsin has appeared in this game three times and have gone 2-1. The last time Wisconsin appeared in this bowl game was 2014 where they lost to South Carolina. If the Badgers are invited, they would potentially face Ole Miss, Kentucky or Texas A&M. Wisconsin would possibly have another opportunity to face an opponent for the first time as they’ve never played Ole Miss.

The Badgers have also never faced a Lane Kiffin led team. That matchup would also be the most interesting because Wisconsin’s defense would face a test against Mississippi Quarterback, Matt Corral. Corral has been in the Heisman Trophy conversation all year as well.

A fun fact about this game is that their 2005 appearance was the last win for Barry Alvarez as the head coach. After that game, he passed the program to Bret Bielema to focus being the athletic director.

The Rose Bowl is a long shot, but it’s also a possibility; a lot of things must happen in order for the Badgers to secure their 11th trip to Pasadena. They first need to defeat Minnesota this weekend and then win the Big Ten Conference Championship as well. If Wisconsin somehow gets in, they will face someone from the Pac-12 which could most likely be Oregon or Utah. The Badgers haven’t faced the Utes since 1996 and are 1-1 overall against them. The Badgers certainly want to avenge the two heartbreaking defeats against Oregon. It’s a tall order, but it’s doable. After all, nobody thought the Badgers would be in the position they are in now after starting off 1-3.

In bowl games facing the Southeastern conference, the Badgers are 3-6. Whomever they match up against in their bowl game, it will be something to watch. Whether it’d be seeing John Settle on the opposite sideline, facing opponents they have never faced, haven’t played in years or avenging a loss; this bowl season will be fun to watch this New Year’s Day.

For more on Wisconsin Badgers football, check out Belly Up Sports and follow Eric on twitter (@sportsteamnews).