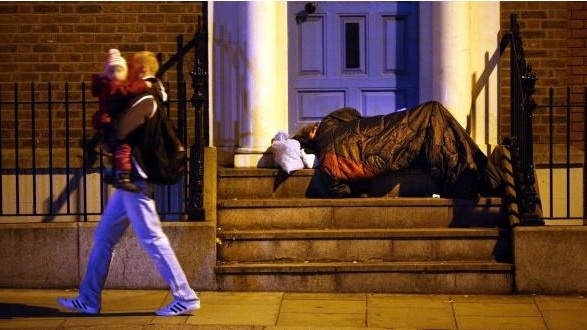 The number of men, women and children who are homeless and living in emergency accommodation has passed the 9,000 mark for the first time since April 2020.

A total of 9,099 people were staying in emergency accommodation during the week of November 22nd-28th 2021, including 2,548 children, according to the latest figures from the Department of Housing.

This compares with the 8,830 people, including 2,513 children, who were reported homeless in October 2021. The number of children who are homeless has risen by 400 over the past six months, since May 2021.

Homelessness number in Ireland fell considerably during the early part of the Covid-19 pandemic, down from a peak of more than 10,500 in late 2019. However, figures have started rising again over recent months.

The last time homelessness figures bypassed the 9,000 mark was in April 2020 when 9,335 people were recorded to be living in emergency accommodation.

The national housing and homeless charity, Peter McVerry Trust, said it was “disappointed but not surprised” by the continued rise in numbers and underlined that 359 children had been made homeless over the past three months.

Mr McVerry underlined how the ban on evictions introduced in October 2020 led to a “dramatic reduction” of almost 2,000 in the number of homeless people and called on the Government to legislate to reinstate the ban.

Ministerial commitments for additional “better quality” family hubs will not reduce the number of children becoming homeless, said Keith Adams, social policy advocate at the Jesuit Centre for Faith and Justice. “There is a clear moral imperative to prevent this due to the detrimental impact on family life and child development. The eviction ban was the rarest of housing policy instruments as the positive effects were quickly felt by households in the private rented sector.”

Focus Ireland also expressed deep concern at the latest homeless figures and warned that numbers were heading in the wrong direction if the Government was still committed to ending homelessness by 2030. Landlords issued more than 2,000 eviction notices during the first nine months of 2021,with the number of these termination notices steadily increasing since lockdown restrictions were lifted last April, said Focus Ireland director of advocacy Mike Allen.

“Half of the notices of termination are due to landlords evicting to sell up, so the Government’s proposals for regulation have done a lot to discourage landlords and very little to protect tenants,” said Mr Allen.

Dublin Simon Community warned that financial pressures and rising costs, along with the rise in Covid-19 cases, was bringing many people who are already in unstable accommodation or employment “closer and closer to the poverty line”.

Labour housing spokesperson Rebecca Moynihan said priority must be given to mothers and their children in emergency accommodation so they can be given “at least some degree of security” and do not have to move from place to place each night while spending days out in the cold. Ms Moynihan called on the minister for housing to “freeze rents until more supply and ban no fault evictions, and ensure when a property is sold that a tenant can remain in place”.

“If homeless children continue to be treated this way the rights of the child in the Constitution won’t be worth the paper it’s written on and we will have failed our most vulnerable children.”