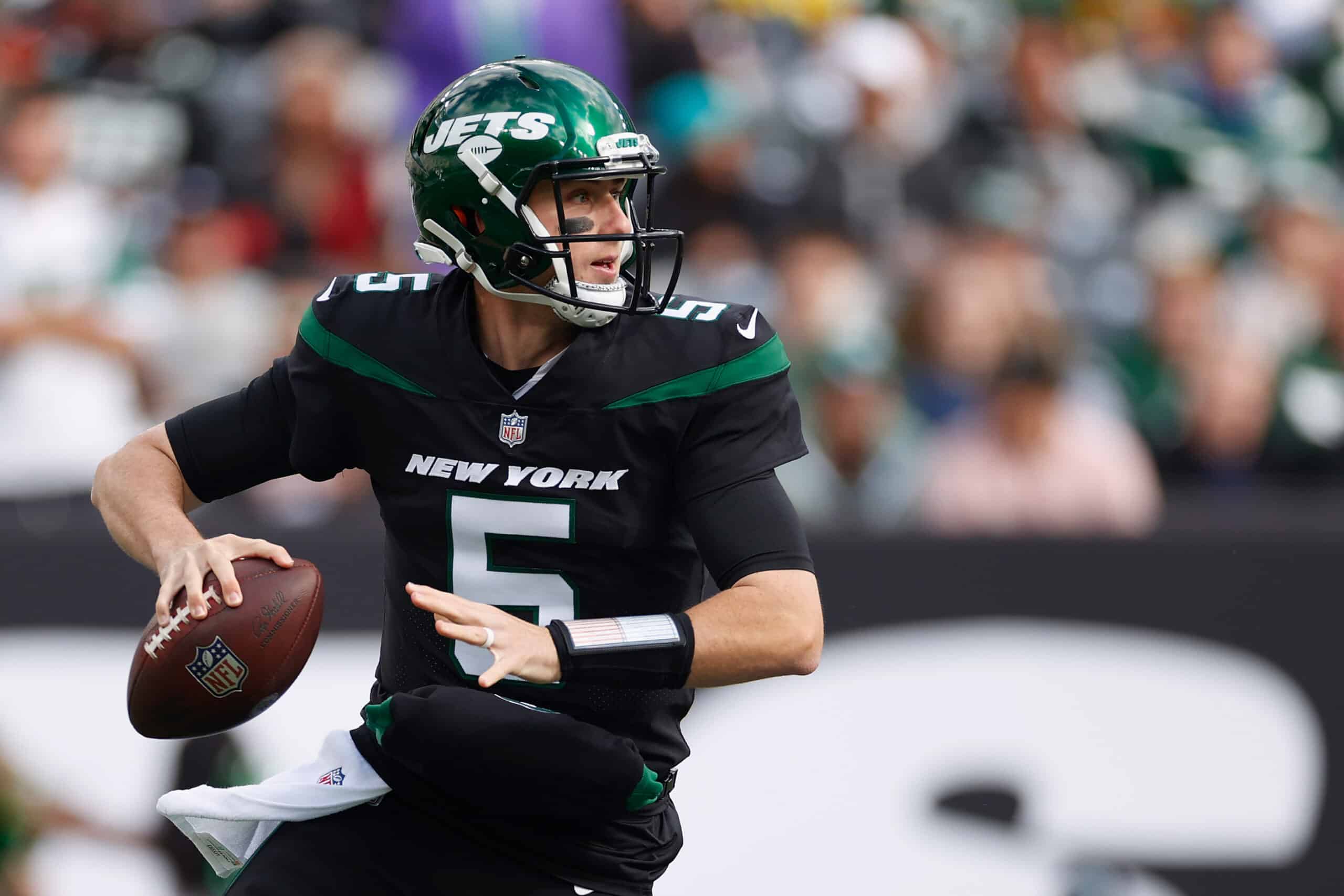 The New York Jets’ quest for a franchise quarterback continues.

After winning Super Bowl III and being the starter for nine seasons, Joe Namath is still their most successful play-caller.

Ken O’Brien trails him by starting for the better part of eight seasons.

Fast forward to recent times, and the Sam Darnold experiment was a failure.

Things could always be worse.

That outcome prompted them to draft Zach Wilson, who has done little to turn their fortunes around.

But just when it’s difficult to find anything positive out of their camp, Mike White dazzled in their win against the Cincinnati Bengals.

Unfortunately, the ship he sailed sank after one week, and Joe Flacco will be starting in Week 11.

Talk Of The Town

It has been a long time since good fortune visited the Jets.

They haven’t made the playoffs since 2010 and have had just one winning season since.

That’s why they celebrate the little things like getting draft picks right.

Mekhi Becton is playing like a viable anchor on their offensive line for years to come.

However, the jury is still out on Wilson because he only has one win in five starts.

No wonder it was easy for Jets fans to rally behind White after the win over Cincinnati.

It’s like the team’s loyal supporters found a savior when they least expected it.

His achievements during that game were no joke.

He also threw two interceptions which don’t matter because the Jets won anyway.

That performance made him only the second Jets quarterback since Vinny Testaverde to throw for 400 yards.

White also became the second quarterback since Cam Newton to complete over 400 yards in their first career start.

From a relative unknown, he became the hottest topic in the NFL as the media elevated his game further.

Experts declared that he was the Jets’ rightful starter even if Wilson recovered from his injury.

It was a no-brainer that head coach Robert Saleh would give him another start.

But the optimism quickly turned to misery as his stint in the limelight came to an abrupt end.

His time as the Jets’ starting quarterback could have ended after their game versus the Indianapolis Colts.

Josh Johnson had a strong performance despite the loss, and that might have been enough for Saleh to reconsider the depth chart once again.

However, White got another chance against the Buffalo Bills, and he did not take advantage.

The Bills were fresh from a humiliating defeat to Jacksonville the week before and unleashed their frustrations upon the Jets.

White had no answer and threw four interceptions.

It’s like he poured everything he had during the Bengals game and played with an empty tank in the following weeks.

Just when the Jets thought that he would be their quarterback for the future, they were wrong.

No one knows if he will get another opportunity after an atrocious outing.

It was so bad that the team brought in Flacco and will have him start against the Miami Dolphins.

Worse, Wilson might get first-team reps once he’s ready to go.

That said, White’s star shone bright and fell from the sky in three weeks, never to twinkle again for the Jets.

So much for declaring himself to be rightful first-round draft pick who will break all of Peyton Manning‘s records.