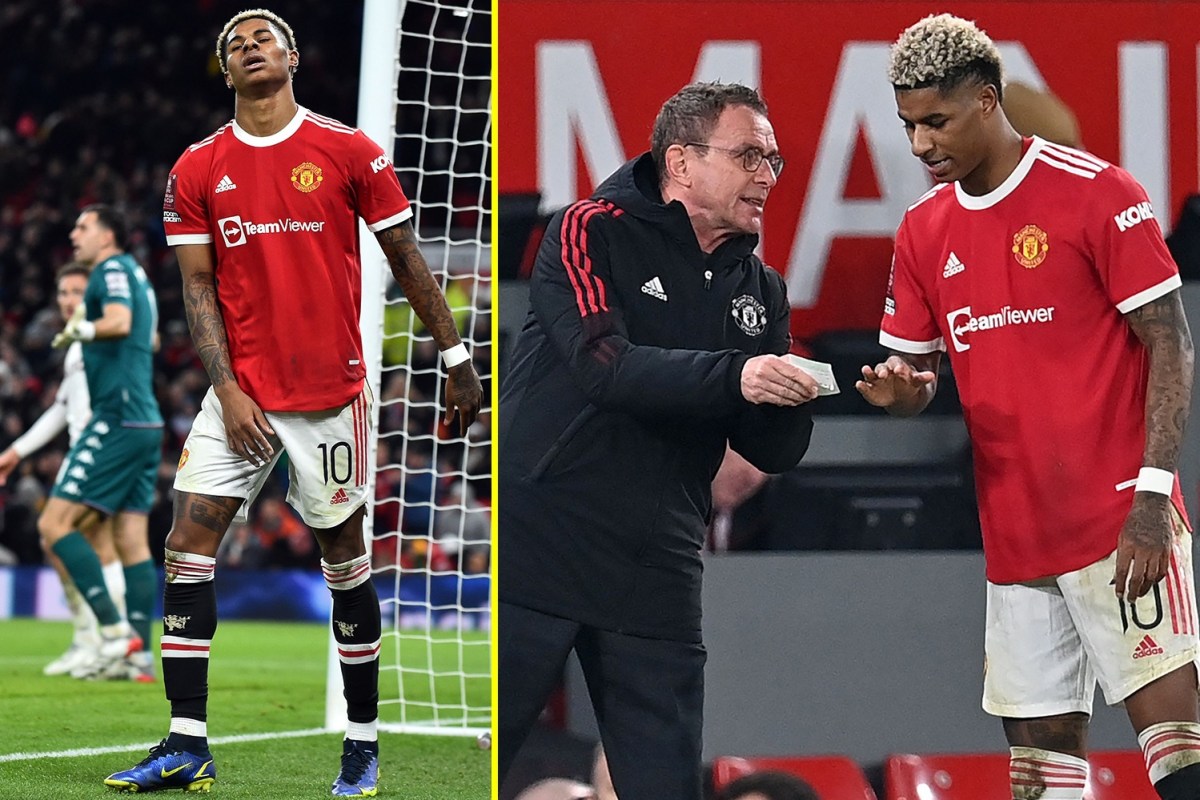 Not many Manchester United players are playing well at the moment but Marcus Rashford, in particular, is in poor form.

And, after another disappointing display in their 1-0 win over Aston Villa in the FA Cup, former United man Micky Gray labelled the forward’s performance, effort, and body language as ‘terrible’, ‘awful’, and ‘as bad as he’s seen’.

The 24-year-old was eventually hooked with four minutes to go, but spent the 86 minutes he was on the pitch failing to make an impact for Ralf Rangnick‘s side, something Gray took exception to.

He said, live on talkSPORT: “Marcus Rashford, I’m sorry, waving your arms around, I’m sorry mate, but if you keep giving the ball away like that then it’s only a matter of time before you’re off this football field.

“It’s happened too many times this season.

“His body language is absolutely shocking at the moment, not just from him, but from a lot of these Manchester United players.”

“Their performance in this second half has been absolutely awful.”

Things got worse for the United forward when, after Mason Greenwood’s shot was parried by Villa goalkeeper Emi Martinez, he had turned his back and wasn’t ready to follow in on the rebound.

This sparked a rant from Gray, who was frustrated by Rashford’s apparent lack of effort.

“We’ve just seen another replay of it now. Marcus Rashford turns his body away from the Aston Villa goal before Martinez has actually picked the ball up.

“Okay, he was probably waiting for the pass from Mason Greenwood, who’s done fantastic, but I’m not having that from a player, turning your back before the goalkeeper’s picked the ball up.”

He went on to say: “[Rangnick] has got to change it. I’m not Manchester United manager but I can see when somebody’s having a bad time.

“You cannot put that down at anything other than he doesn’t want to run around. You can have a bad first touch, you can have a really bad game, you can keep giving the ball away but you need to show effort and try.

“He is not running around – that is as bad as I’ve seen. What he’s just done there is terrible. You do not do that on a football pitch. Turn your back? Please…”

Marcus Rashford’s expression on the bench after being subbed off said it all — poor, rock-bottom confidence, lacking self-belief and simply not good enough.

Don’t know what’s going on with him but hope he’s able to turn this around. pic.twitter.com/2LoQCshIue

Commentator Sam Matterface was quick to hypothesize why the England international’s form has nosedived, citing his injuries, his missed penalty in the Euro 2020 final, or his campaign against the government as possible reasons why he isn’t performing.

Rashford has consistently been one of United’s best players over recent years but, since he has come back from injury this season, he was been a shadow of his former self.

“What is it? Because there’s something, he looks like he’s given up,” Matterface said.

“I’m looking at him and I feel sorry for him because he looks to me as if he’s carrying the weight of the world on his shoulders and he’s struggling mentally.”

He added: “Maybe he’s struggling with the spotlight that has befallen him because of all of the off-the-field issues?

“The missed penalty at the European Championships, maybe he didn’t really envisage that he would end up taking on the government as he did during the pandemic.

“Maybe that has eventually taken its toll, but his football career is stalling.”