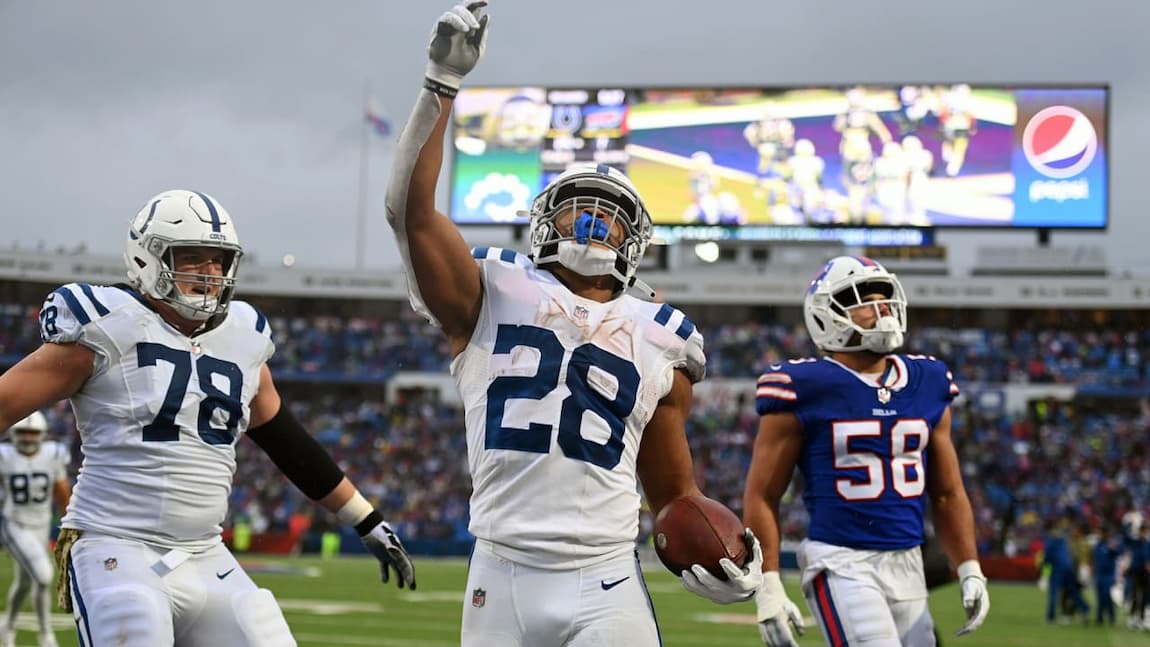 Taylor Puts on Show in Buffalo

Jonathan Taylor put on a clinic in the Indianapolis Colts easy win against the struggling Bills. The running back scored a total of five touchdowns in a 41-15 rout in Buffalo. Some called this performance a breakout game for Taylor. That, however, is not the case.

Even before his amazing performance, he was near the top of all healthy backs in the NFL in rushing yards. The only player that was close to him in that stat was Derrick Henry. Henry has played in just eight games compared to Taylor’s 11 due to a possible season-ending injury he suffered earlier this year. This is not a surprise to anyone who follows the league. He had over 1,000 yards on the ground as a rookie last year. That was not a shocker either. Taylor had 6,174 YDS and 50 TD in his three seasons at Wisconsin. He was selected as a Big Ten All-American and won the Doak Walker award in both 2018 and 2019.

He has undoubtedly been a key player for the Colts since he came into the league. So much so that he may be the best running back in the NFL. The prevu=iously mentioned Henry, Christian McCaffrey, and Ezekiel Elliott have held that title in the past according to many experts. Running backs tend to wear down quickly in the NFL, though. Once they hit 30 years of age, they are considered to be over the hill and not much is expected of them from thereon. Taylor will need to make the most of his time and take care of his body if he wants to carry that honor for multiple seasons,

The Buffalo Bills are Dead in 2021

Saying Buffalo is dead might be a bit of a drastic statement this early in the season, but they are heading that way. The team was projected as one of the best teams in the AFC. They were also picked to win their division by almost everyone prior to this season. Those projections are not looking good for the Bills. After this loss, they are seventh in their conference and second in the AFC East behind the New England Patriots.

Buffalo quarterback Josh Allen has played well this season but has not looked like the MVP candidate many thought he would be. He and the rest of the team need to come together if they want to make those predictions come true. Otherwise, it will be another underwhelming year for the Bills.

This article was published on the Belly Up Sports website and specifically its NFL page. Belly Up Sports also has a Twitter page where you can interact with the network. I also have written for this outlet before so see my most recent story if you would like. If you would like to talk to me directly, feel free to chat with me on my Twitter as well. Try to keep it clean and proper. If you are incapable of doing so, ignore that completely and battle it out with me. Just a few warnings for those who dare challenge me. I am highly competitive and hate to admit when I am wrong. So be prepared for a war of words.