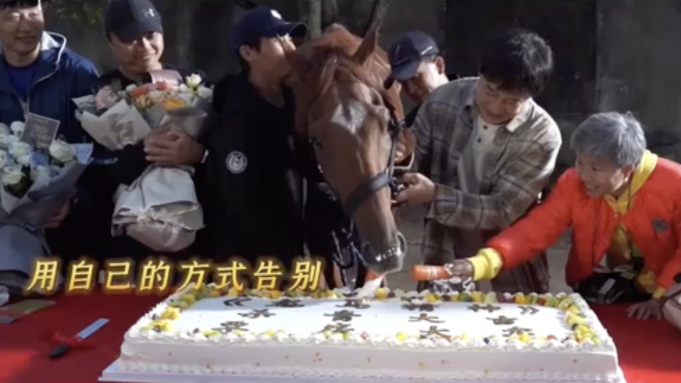 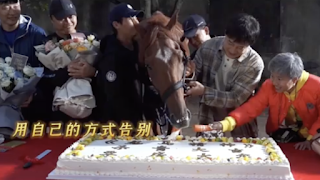 (Variety) Jackie Chan’s latest martial arts comedy “Ride On” wrapped shoots on Thursday. It is set to release next year.

Local media reports showed a teary-eyed Chan congratulating the crew on the successful production holding a bouquet of pink and orange flowers from director Larry Yang Zi, best known for his work on the 2019 heart-warming New Year’s Eve pet drama “Adoring” and the 2016 drama “Mountain Cry.”

The team celebrated with a huge cake with a large carrot sticking up from it for Chan’s horse co-star.

In “Ride On,” Chan, 67, plays a washed-up martial artist named Lao Luo who’s devoted to his old stunt horse Chitu, though Chitu suddenly may be taken away from him because of debt troubles. A heart-warming road trip then ensues when he asks his daughter (Liu Haocun of “Cliff Walkers”) and her boyfriend (Guo Qilin) for help. The story’s laughs center on Chan’s fatherly affection for his horse.

The final day of shooting took place at the Hailian Equestrian Center in Jiangsu province, home to one of the country’s largest indoor equestrian show arenas, according to local reports.

Ever prolific, Chan has released a new film a year since 2019, even amidst the pandemic. Last year, Chan’s “Vanguard” made $44 million in China despite being deemed a bomb with critics and social media users who rated it a mere 4.5 out of 10 on the Douban review site.