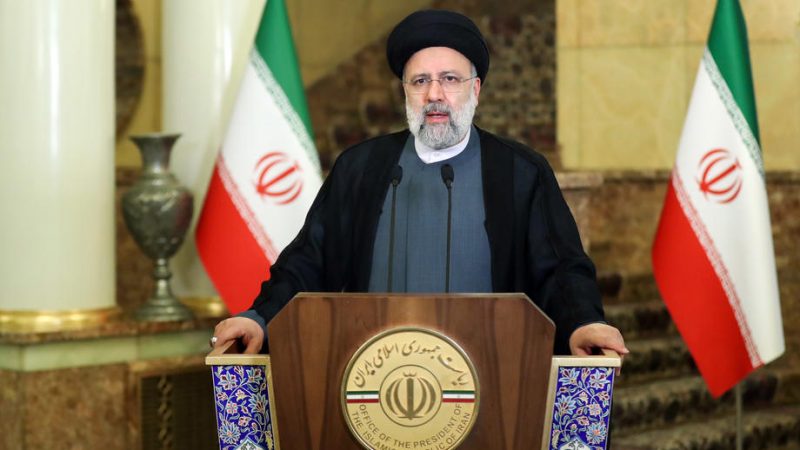 Iran’s new ultraconservative president voiced support Tuesday (21 September) in his international debut for reviving a nuclear accord even as he berated the United States, hailing what he described as its failures.

President Ebrahim Raisi, a hardline cleric who succeeded a government that sought better relations with the West, called on the United States to fulfill its promises to end sanctions under the 2015 nuclear accord.

“The Islamic Republic considers useful talks whose ultimate outcome is the lifting of all oppressive sanctions,” Raisi said in a recorded speech to the UN General Assembly.

Indirect talks brokered by the European Union have been on hiatus since June after months of negotiations with the previous government failed to secure a path forward.

Raisi repeated the clerical state’s stance that nuclear weapons are religiously prohibited, a position that has been met with skepticism notably by Israel, which has carried out a sabotage campaign to delay Iran’s nuclear work.

Nuclear weapons “have no place in our defense doctrine and deterrence policy,” Raisi said.

Raisi is notorious among human rights advocates for his role as a judge during mass executions in 1988 when the Islamic republic was solidifying control, with some activists encouraging the West to shun him.

But Western powers, as well as China and Russia, say they see the value in restricting Iran’s nuclear program peacefully under the 2015 agreement, from which US President Joe Biden’s predecessor Donald Trump withdrew the United States.

EU foreign policy chief Josep Borrell said he will meet Tuesday at the United Nations with Iran’s new foreign minister, Hossein Amir-Abdollahian, and push him to restart the talks in Vienna “soon.”

Foreign Minister Heiko Maas of Germany, which remains in the nuclear accord, said it was urgent to resume negotiations, amid Western concerns that Iran could advance nuclear work.

“We’re not going to wait two or three months for the Iranian delegation to return to Vienna. It has to be quicker,” Maas told reporters.

France’s top diplomat said Monday (20 September) that he hoped a meeting of foreign ministers in New York this week would build positive momentum towards kick-starting stalled talks over the Iran nuclear deal.

Iranian foreign ministry spokesman Saeed Khatibzadeh, traveling with Raisi, said he expected a resumption of the indirect talks “in the coming weeks,” without giving an exact date.

President Biden, appearing in person in his own maiden UN speech, renewed his willingness to return the United States to the nuclear accord and lift sanctions.

“We’re prepared to return to full compliance if Iran does the same,” Biden said.

Iran has taken steps away from the accord to protest the sanctions and has insisted on a full lifting of economic pressure — while the Biden administration says only measures imposed by Trump over the nuclear program are on the table.

Raisi devoted most of his speech to fiery denunciations of the United States, pointing to the collapse of the Western-backed government in Afghanistan, as well as the mob attack of the US Capitol on 6 January by Trump supporters seeking to overturn his defeat.

The two events show that “the US hegemonic system has no credibility, whether inside or outside the country.”

“What is seen in our region today proves that not only the hegemonist and the idea of hegemony, but also the project of imposing Westernized identity, have failed miserably.”

Aiming squarely at US domestic politics, Raisi cited the slogans of Trump and Biden: “Today, the world doesn’t care about ‘America First’ or ‘America is Back.’”

The language was a marked difference from his moderate predecessor Hassan Rouhani, a fellow cleric, who called for allowing greater freedoms and interaction with the outside world.

But Raisi stopped short of the inflammatory language of previous president Mahmoud Ahmedinejad, who isolated Iran on the international stage by calling for Israel’s destruction and denying the Holocaust.

Raisi nonetheless denounced Israel in terms sure to anger the Jewish state, calling it the largest sponsor of “state terrorism, whose agenda is to slaughter women and children in Gaza and the West Bank.”