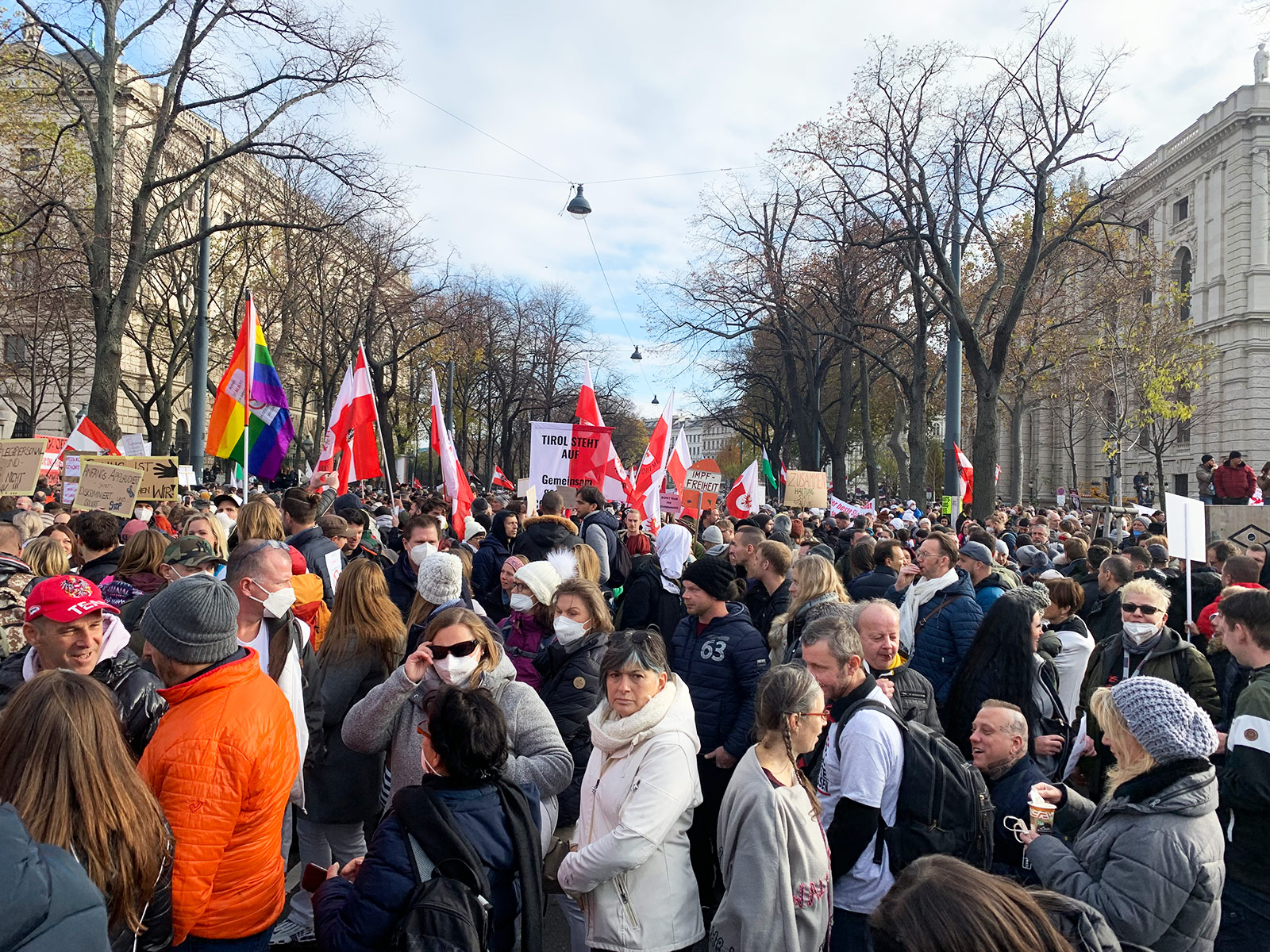 On Friday, news broke about a nationwide lockdown in Austria, which comes into effect on November 22. This was coupled with a government decision to make getting vaccinated against COVID-19 a legal requirement by February 2022. The result was a flood of demonstrators descending onto the streets of downtown Vienna to protest this unilateral move. My sister and I were among them.

We arrived at Rathausplatz just after noon on Saturday and were surprised to see a sizable turnout was already present. In particular, it was interesting to see people from all walks of life come together to voice their discontent with what many believe to be an authoritarian decision by our government.

There is no doubt that the COVID-19 pandemic and the resulting restrictions have caused heated debate in Austria and around the world. It has led to rifts within households, arguments amongst friends and clashes between political opponents. Nearly two years since the outbreak of the virus, many of us are left with questions unanswered over our inalienable rights, our livelihoods and the state of our future. What is more startling is how the narrative surrounding the coronavirus and its transmission has changed, leaving many skeptics wondering whether the Austrian government has our best interests at heart.

Whilst walking around before the march commenced, I noticed many women holding signs stating, “My Body, My Choice.” Before Chancellor Alexander Schallenberg’s press conference announcing the new restrictions and vaccine mandate, it seemed unfathomable that a democratic country like Austria could force individuals to either get vaccinated or suffer the consequences. Starting November 15, those unvaccinated were ordered to stay at home or incur a hefty fine. This was a lockdown specifically for people who chose not to receive a jab.

Despite Austria being a relatively small country, news of a national lockdown and vaccine mandate sent shivers throughout the globe. Stock markets around the world did not take the news lightly, with most indices tumbling considerably. My sister was surprised to hear this. “How can the policies of one small nation have such an impact on the international market?” she asked. I replied saying that many were worried that Germany and other countries in Europe would follow suit and that this would create a ripple effect.

When the rollout of vaccines began at the beginning of 2021, many were optimistic that it was the beginning of the end for restrictions placed on our lives and that some degree of normalcy could return. Pharmaceutical companies such as Pfizer and Moderna touted their two-dose vaccines to be over 90% effective in preventing the transmissibility of the virus, and governments were quick to encourage people to get their first jab immediately.

However, as the coronavirus inevitably mutated into thousands of strains, as all viruses do, this efficacy rate was now in question. US President Joe Biden’s former senior adviser for COVID response, Andy Slavitt, stated in July that the dominant Delta variant is far more contagious than previous strains and everyone will inevitably get it. Despite this, many governments around the world argued that a vaccine was paramount in slowing down the spread of the virus and that this was the soundest policy to embrace.

Yet data collected by Johns Hopkins University seems to indicate otherwise. South Korea, which has vaccinated 80% of its population, has seen a considerable surge in COVID-19 cases. The situation is similar in the United Kingdom and Israel, which have comparably high percentages of their population vaccinated. A year-long study recently revealed that those vaccinated are just as likely to transmit the virus as those who are unvaccinated.

This begs the question: Are vaccines the solution in controlling the spread of the coronavirus and stopping the global pandemic? Also, why are so many governments adamant and unrelenting in getting their populations vaccinated?

As a large group of protesters could be heard coming our way on Vienna’s Ring Street, I could sense that the march was about to begin. Police were out in droves, with news outlets reporting that 1,300 officers were dispatched, many coming from rural parts of Austria. I saw a number of flags being waved, including Italian, Croatian, Slovenian, Polish and countless Austrian ones. A strong sense of solidarity was on display, and I couldn’t help but notice that many, regardless of their nationality, felt that this was their patriotic duty to turn up and speak out against what they felt was an infringement on their basic rights.

The atmosphere was positively charged. Despite the big crowds, people were cordial in making way for others, and some would strike up friendly conversations with one another. The man who was tasked with giving a speech about why we were protesting started speaking about a two-tier system that the government had created and the division it has sown between people. Demonstrators were clapping and cheering in agreement, and I found myself nodding along to the point he had raised.

I recall hearing the term “medical apartheid” a few months ago, which I found apt in describing the current status quo. It is undeniable that those who have chosen not to get vaccinated have endured social consequences in various forms. Previously, in order to visit a restaurant, museum or club in Austria, one had to provide proof of vaccination, a recent recovery from COVID-19 or a negative PCR/antigen test. The latter has since become inadmissible. Institutions such as universities do not accept proof of recovery from the virus either, known as the “1G” rule, for lectures. This applies to both students and staff.

These measures are interesting considering that researchers in Israel found that antibodies resulting from infection last longer against the Delta variant than those produced by two doses of the Pfizer vaccine. So, the question is what will be the next step taken by our government? Will booster shots become mandatory at some point?

As my sister and I looked back at the crowds, we saw a sea of people. We couldn’t tell where it started and where it ended. I asked, “How many people do you think turned out today?” She replied, “Around 8,000 to 10,000?” That seemed to be far fewer than what I thought — more like 25,000. After a few hours and worn-out soles, we decided to go home and make use of what was left of the weekend before the lockdown begins. I arrived at my apartment and noticed my sister had sent me a message. It was an article by Die Presse that said over 40,000 people attended the demonstrations in the capital.

To my dismay, the state broadcaster ORF, along with many national and international news outlets, downplayed and dismissed this protest as one organized and “led by right-wing extremists and hooligans,” which was simply inaccurate and truly unfortunate to read. This raises questions as to what motives or agendas these media organizations have and the negative consequences of their reporting on people’s trust in the veracity of their content.

I couldn’t help but think about the Joe Rogan debacle over the anti-parasitic drug ivermectin and how news broadcasters such as CNN deliberately twisted information. Rogan, a well-known podcaster who chose not to get vaccinated, contracted COVID-19 a few months ago and recovered. He took ivermectin, a drug prescribed by his doctor to treat early symptoms of COVID-19. Upon taking the drug, CNN and other outlets spun the story and said he took a “horse dewormer,” conveniently ignoring studies that have provided sufficient evidence into the effectiveness of ivermectin on COVID-19 patients.

For the record, I am not against anyone getting the jab; I got vaccinated this summer to avoid restrictions on my movement and activities. Yet, just as it is a person’s right to get vaccinated, if someone opts not to do so, that is their choice. If we allow the Austrian government to unequivocally determine what is best for us when the evidence is changing constantly, then I fear this will give the government a carte blanche to meddle in our private affairs without reservation. And we will have given them the mandate to do so.

That is a terrifying prospect and must be avoided at all costs. For what is more sacred and personal than our own rights, health and well-being?