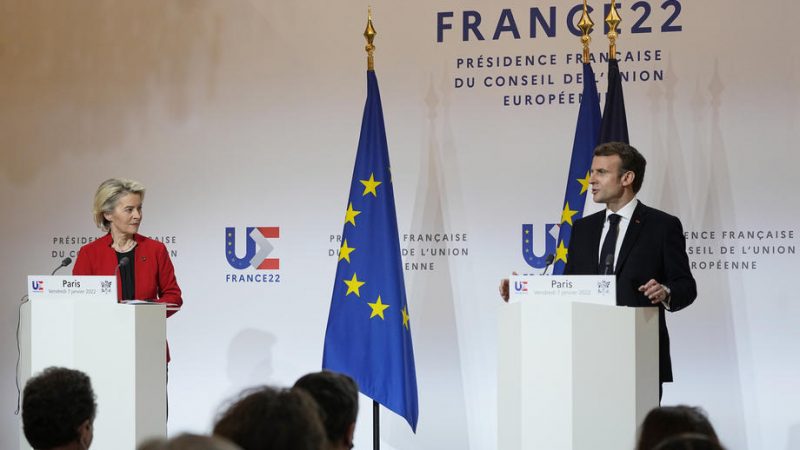 The unrest in Kazakhstan, the tensions around Ukraine and the need to have a credible European policy vis-à-vis Russia dominated the main event at the inauguration of the French Presidency of the Council of the EU – the press conference by French President Emmanuel Macron and Commission chief Ursula von der Leyen, on Friday (7 January) in Paris.

Macron said he was concerned about the situation in Kazakhstan, which has been hit by a wave of protests, adding he would continue to monitor developments in the country. Russia sent troops to the former Soviet republic. Kazakhstan is a Collective Security Treaty Organisation (CSTO) member, a Russia-led military alliance.

“We are concerned, we are vigilant, we have called for de-escalation, and we are mobilized, in this completely new context, to be active”, Macron said.

Kazakh President Kassym-Jomart Tokayev said on Friday that he had given shoot-to-kill orders to deal with further disturbances from those he called bandits and terrorists.

The Kazakhstan uprising began as protests in oil-rich western regions against the removal of state price caps for butane and propane, but the protests then intensified and spread, with a number of deaths reported.

The European Commission will offer help to Kazakhstan where it can to resolve the crisis, the head of the Commission said.

“I am monitoring the situation in Kazakhstan with a lot of concern,” von der Leyen told reporters, speaking alongside Macron.

“The rights and security of citizens are of primary importance and must be guaranteed. We offer our assistance where we can,” she said.

Asked about the current tensions surrounding Ukraine, and if there was a risk that Europe would be sidelined by the US and Russia, Macron said it was “a good thing” that Moscow and Washington talk to each other. He stressed that the transatlantic coordination was very efficient.

“The coordination between Americans and Europeans is exemplary on this issue and we had several exchanges with President Biden before and after his talks with President Putin. If these exchanges concern the Ukrainian issue or several other bilateral issues, they do not treat the issues of European security architecture, which is first and foremost an issue for the Europeans”, the French President said.

He said it was up to the EU to devise this European security architecture which makes it plain that Europe is a geopolitical force, to propose it to their NATO allies and to share it with their neigbourhood.

Macron also said that he had two “lengthy” telephone conversations with Putin and that there would be further talks in the coming days.

‘Europe must have a dialogue with Russia’

Macron recognized that due to their geographic position and history not all EU countries had the same attitude vis-à-vis Russia, and said this was why he engaged in bilateral visits to explain his position.

The French president also said that he was prepared to integrate in this dialogue the entire range of security issues, “including medium range missiles in Europe and nuclear capability”.

“Let me remind you, as a result of a unilateral US decision, we are no longer covered by the INF treaty, which is of concern for countries in Central and Eastern Europe”, Macron said.

On Ukraine, Macron said that together with German chancellor Olaf Scholz he had proposed a new round of the so-called “Normandy format” talks on de-escalation in Eastern Ukraine.

The Normandy format which is in charge of implementing the Minsk agreement of 2014, includes Ukraine, Russia, Germany and France, and has been largely unproductive in the last two years. Diplomats however told EURACTIV that Kyiv was not interested in the agreement, because if fulfilled, it would create a powerful pro-Russian political force in the Ukrainian parliament.

Von der Leyen also said that any solution to the current tensions would involve Europe. She said that the EU was very active in supporting Ukraine.

“I was there in October. We offer Ukraine huge financial support: 6 billion euro. We are indispensable regarding the energy security of Ukraine. The EU has also imposed sanctions on Russia because of its aggression”, she said, adding that EU countries constitute the majority of NATO members, which in her words had a “crucial role” in this dialogue.