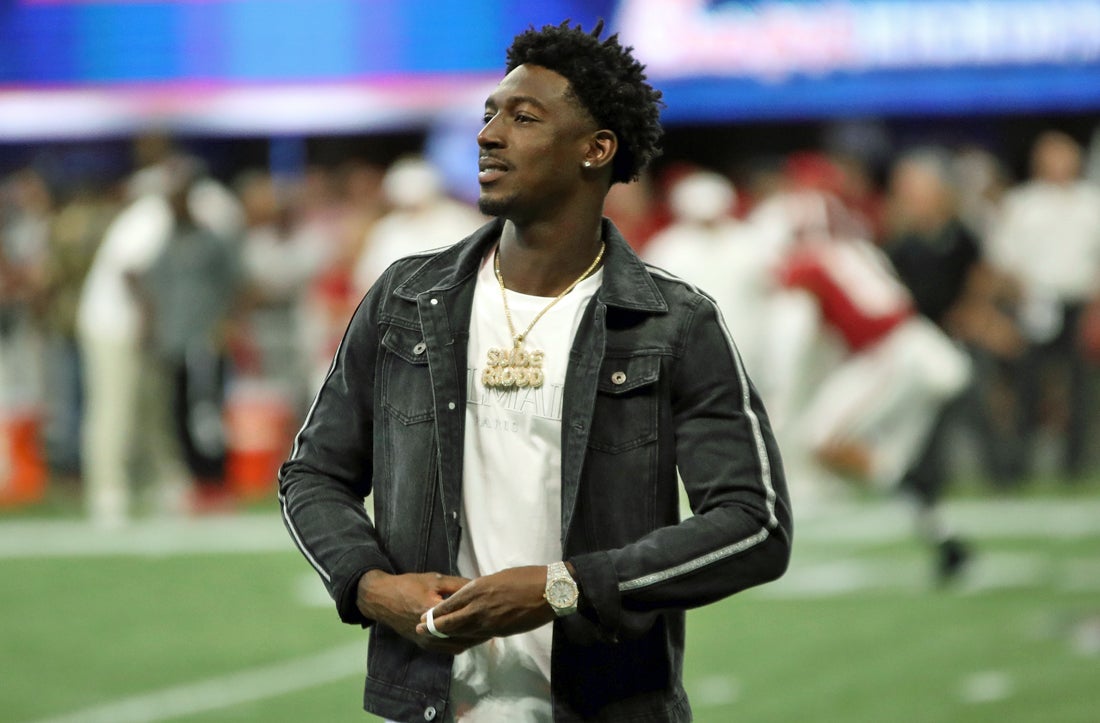 We have all seen it, the moment in a game when a player taps his helmet. It’s the universal football signal for “I need to come out.” When we allow ourselves that break it can offer a new perspective from the sideline. Perspective can show us the path we need to be the best version of ourselves. We must tap our helmets from time to time to see it.

There are a couple of reasons for needing to come out. Usually, it is tiredness or injury. Both of these can hamper a player from performing at his best on the next play or series of plays. It takes a strong man to put aside his ego and aspirations for the betterment of the team. That is a sign of true selflessness and teamwork. He stands on the sideline and watches for a play or two.

What I want to know is, why has society never realized the benefit of viewing an event from the sideline? Why do we view these athletes as super-human and forget the “human” aspect of that title? It is not fair to expect perfection from the field at all times. It is far less fair to expect them to not ever need help or a break.

For a long time, I struggled with the idea of what it meant to be a man. I viewed athletes as the epitome of a manly figure. To me, being able to lift weights or be fearless of any situation is what made me a strong man. To this day I struggle with that idea, but I am at least now aware of how wrong it is. Being aware of the flaw in the idea of what a “manly man” is has granted me the freedom to think outside the box of what I want my life to look like. It has shown me a new image of strength and pride.

I was always on the weaker side of the crowd from a strictly physical standpoint. I was always nervous to be alone with other men because I felt like they would see right through my “fake it ’til I make it” mentality. This had been a result of years of bullying mixed with the strong desire to fit in and please those around me. I never felt like I was enough. The difficulty to even feel comfortable talking to men without feeling judged or inadequate was paralyzing.

I grew up in a loving family and community. I have no complaints about that, and I know I had it a lot better than others. The reality though, is that my family was prominent in the community and I had expectations to live up to. But these expectations were not what I wanted for myself.

I found myself feeling constantly under criticism by the community around me. Despite the love and care intended, I wasn’t prepared to deal with the pressure. I was thrust into a social situation that I was not ready for.

The same thoughts of inadequacy and doubt triggered by social media can affect those we idolize. We need to remember that these men are just like us with a special skill that has allowed them to achieve their dream. It is no different than someone who finds comfort and reason in numbers becoming a partner at an accounting firm. We are all born with a unique set of skills, and it is up to us to navigate how to apply those.

Show Support for Each Other

.@Titans WR @1kalwaysopen_ shared a powerful message on his Instagram and TikTok accounts about depression, anxiety and mental health while encouraging others to get help. “Be there for someone because someone was there for me,” Brown said. “Take depression seriously.”
🎥 https://t.co/y5IVgmiBHD

I am grateful for these athletes, and I respect it when they use their platform for the better of our society. Athletes like Calvin Ridley and A.J. Brown, who chose to speak out publicly at the risk of their fanbases viewing them differently, give me hope that we can change these stereotypes as men.

The NFL is not the job for the physically weak nor the mentally weak! #darwinism (But, there’s always work at the post office! 😉) https://t.co/MRRprjCaZr

When I see comments like those by Marcellus Wiley saying that the NFL is not a place for those who struggle with mental health, it pains me to know what kind of message that is sending to younger men. That is the exact problem we have in our society these days. Countless men suffer from mental illness, but they are too embarrassed or proud to seek professional help.

Over the last years, I have sought out professional help that has changed my life. I was struggling to be both the husband and father that I imagined myself being. Now that I have opened up to someone and accepted help, I feel like I am on the path to being the man I want to be in this world. I want to be a man that is strong for my family in the ways they need me and I want to be a man that can enact change among a community of men. I do not want other young men to suffer from the same pressure that I encountered.

The strength of Calvin Ridley to step away from his passion and what provides for his family shows strength that I can’t imagine. If we talk about ideas of men and strength, we need to be idolizing decisions like this that are hard. They can ultimately be catastrophic to the social construct we exist in.

Bringing It Back to Football

Yes, the Falcons miss him and the league as a whole misses the talent he brings to the game. We should want the talent and the man that he is to play for a while. We need to allow him to explore what he needs to explore mentally to further his character. It’s no different than an athlete deciding to build muscle and making the effort to spend time lifting. Every aspect of these men plays a role in the player we want and expect them to be.

I remember a time when these men were more than athletes. These men were heroes and role models to countless teens and pre-teens. I used to collect jerseys of my favorite players such as Barry Sanders, Brett Favre, Drew Bledsoe, and countless others. Before social media, these men could block out the hate and degrading comments. Today, they are faced with criticism from those who quite frankly, have no business criticizing them.

As men, we are programmed to have an ego that we can hold up to. To us, success is being better than those around us. That is what needs to change. Success should be viewed as the change we can enact with the power and platforms we are given. No longer should we compete with other men to be the manliest of them all. We need to compete alongside each other so that all men can be strong for our society and families

Strength does not mean being able to conquer every obstacle that is in our way though. Strength means giving every challenge we face 100 percent until we cannot give any more. When we are spent, we should dare to say to other men “I cannot do this anymore alone.” Admitting we have deep emotions and problems is an important part of realizing your true self in my opinion.

I salute you, Calvin Ridley, for taking the time needed to be the best version of yourself for your family. I also admire A.J. Brown for speaking out publicly in support of Calvin Ridley with his own story of struggle that he overcame. He overcame by asking for help. He dared to admit to himself and others that he was not perfect. When we admit that we don’t fit the mold of society, we change the mold of how we are seen.

Take the time to tap your helmet when you feel like you need to. Feel confident in your decision to pull yourself from a situation. Then take a second to view it from the sideline. We should embrace the idea of viewing life from the sidelines. Then when you are called to enter the game, you can perform at your highest capability.