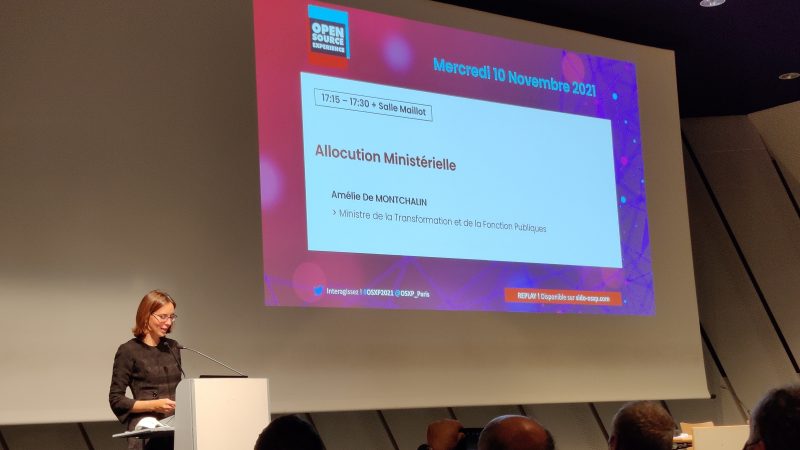 The French government’s roadmap for developing open source to make it a vector of digital sovereignty and a guarantee of “democratic confidence” was presented by Public Transformation and Civil Service Minister Amélie de Montchalin on Wednesday (10 November). EURACTIV France reports.

Montchalin spoke at the closing of the first edition of the “Open Source Experience”, which took place from 9-10 November and brought together all players in the free software community in Paris.

“We must now build the public action of the new century,” she said, indicating that France will look to inspire the “many States [that] seek to embark” on greater openness of public data and the use of open source.

“Open source contrasts with proprietary software in that the source code of applications is freely available to the public; it is developed in a collaborative and decentralised way, by a community, and relies on peer review. But more importantly, it is not owned, in the proprietary sense, by anyone,” Quentin Roland of LegalUP Consulting told EURACTIV.

With the vast majority of relations between citizens and state services now being digital, Montchalin believes a “culture of transparency” is necessary for “democratic trust”. It is also a matter of digital sovereignty, she added.

According to a European Commission study published in September, investment in open source software in 2018 generated a sum of €65-95 billion in revenue. According to the same report, France was crowned European champion of open source policies.

To help French administrations make greater use of such solutions, Montchalin announced the creation of a team within the Interministerial Digital Directorate (DINUM) responsible for the promotion and inter-ministerial coordination of this mission.

She also revealed the launch of the code.gouv.fr platform, which will inventory all source code published by public organisations.

The source code for ‘France Connect’, the digital identification system for government services used by more than 30 million French people, will be public ‘in the next few days’, Montchalin also announced, adding that she would do the same for the code determining income tax deducted at the source.

French Prime Minister Jean Castex reminded the government services on Tuesday (27 April) of the “strategic” importance of an “ambitious” public data policy and urged them to get “personally” involved in facilitating third-party access to their data. EURACTIV France reports.

Not a new ambition

These announcements follow the report on public policy on data, algorithms and source code, which La République En Marche MP Eric Bothorel submitted to the government in December 2020.

“[The report] makes a clear statement: the potential for opening up resources is still very great” and its use can be “strengthened”, said the minister.

A few months after the report was submitted to the Prime Minister’s office, Jean Castex urged all government departments on 27 April to do more to facilitate access to their data, algorithms and codes “in open formats that can be used by third parties”.

The PM also urged them to turn to free and open software. “This is a first step in the right direction, which should be confirmed and detailed,” the free software association April said. However, the group recalled that former prime minister Jean-Marc Ayrault had already highlighted the “assets” of the free software in 2012.

In his report, Bothorel recommended using more open source software because “infrastructures necessary for data are increasingly exposed to forms of software dependency” and that this therefore raises “a strategic autonomy issue”.

This vision is shared by Montchalin, who wants the state to retain “control over the solutions” it uses. She also stressed the importance of interoperability – the ability to work with other existing or future products or systems – and reversibility – the ability to resume using data or software in the event of migration to another solution.

“By using open source software, you give yourself much more autonomy than by using proprietary software and a fortiori proprietary cloud services that are hosted outside Europe,” Stéfane Fermigier, co-president of the Union of Free Software and Open Digital Businesses (CNLL), told EURACTIV.

“Open source has enormous potential for Europe and its digital sovereignty strategy” as it removes “risks of economic subjugation, geostrategic and technological dependence” and emphasises “transparency that seems to be fully aligned with European democratic values, emphasising information for citizens and control of their social system,” according to LegalUP Consulting’s Roland.

However, it is not a “miracle solution”, he added, noting that this is because open source software does not always offer the same technical level as proprietary solutions, mainly because open source code makes it easier to discover security flaws, which can be exploited.

“However, this is an extremely interesting alternative for Europe, a third way between digital giants and local players; an opportunity to ensure independence through neutrality and decentralisation rather than conflict,” he also said.

According to Fermigier, however, “free software is also an opportunity to rethink a number of habits and reflexes,” particularly in the field of public procurement.

“It’s an opportunity to think about what we need, to use the best tools for our needs and not for marketing or expectations,” he added.

French MP: Digital sovereignty is about being able to choose dependencies