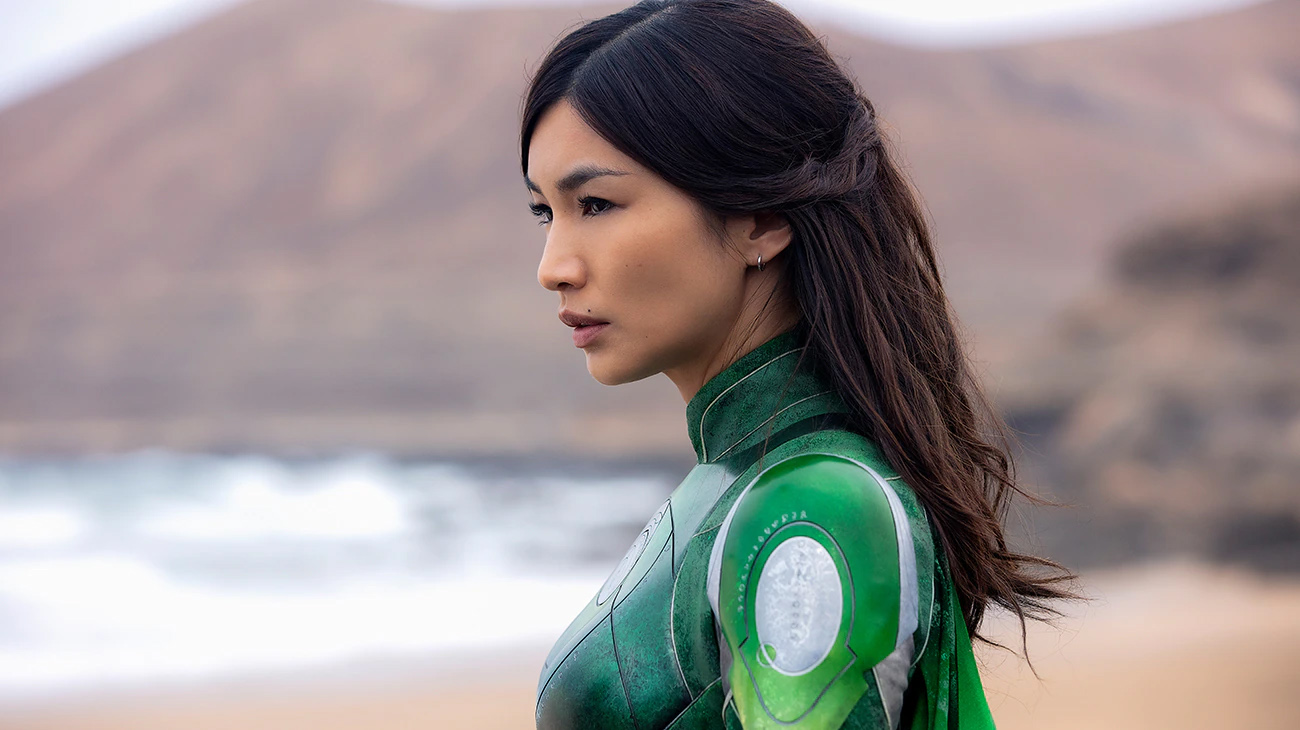 Helmed by Chloé Zhao, the first Asian and first woman of colour to win an Academy Award for direction for Nomadland (2020), Eternals is the 26th film in the Marvel Cinematic Universe (MCU). It is also the first MCU film to be directed by an Oscar winner.

The Marvel movie is based on the comic book characters of the same name created by Jack Kirby in 1976.

As part of the Marvel Cinematic Universe’s Phase 4, the film follows the releases of Black Widow and Shang-Chi and the Legend of the Ten Rings (both released this year).

Eternals — as seen from Phase 1 through Phase 3, which culminated as the “Infinity Saga” — fits into a wide interconnected storyline comprising multiple movies and television shows such as WandaVision, The Falcon and the Winter Soldier, and Loki.

Following its Los Angeles premiere on 18 October, 2021, the film was screened at the Rome Film Festival on 24 October. The upcoming film is slated for release in Hong Kong, Malaysia, Singapore and Thailand on 4 November and will hit the screens in India, the UK, Japan, and the US the following day.

Disney has said that some of its movies, including Eternals, will be screened in theatres for 45 days before being released on its streaming platform Disney+.

Before you watch the Marvel Studios’ film, here is all you need to know about Eternals, including what initial reviews say

Celestials, a race of mighty giants who have been around since the beginning of the universe, genetically create an alien race of powerful humanoid beings known as Eternals and send them to Earth in a triangular spaceship.

The Eternals have been living on our planet for some 7,000 years, with no one having a clue about their existence. The ancient aliens, who are “immortal”, have successfully blended in among humans.

Apparently, their only purpose on Earth is to protect humans from their immortal enemies, the Deviants — an equally powerful but dangerous alien race. Centuries ago, the Eternals believed they had defeated the Deviants in a war.

While living their lives peacefully, a return of Deviants forces them to reunite. This time, they have even more to learn about themselves and their creators than they ever knew.

Who are the Eternals and what are their powers?

Armed with unique powers, the 10 Eternals depicted in the movie are led by the character Ajak.

Ajak is the “mother-like” figure to the Eternals and their de facto leader. She can communicate with their maker — the Celestials — and can heal any wound.

Joining Ajak as an elite Eternal is Thena. A fierce warrior, she can make weapons using cosmic powers. However, the well-trained warrior is also suffering from what is called “Mahd Wy’ry”, an ailment that is making her lose control over her mind due to accumulated memories over the millennia.

In the film, Sersi is projected as the main character. She is an empathetic Eternal who has the power to control the molecular structure of anything, that is to say, she can manipulate matter.

Ikaris has been Sersi’s former lover. He can fly and fire cosmic beams from his eyes. (Yes, somewhat like Superman.) However, he is not as physically powerful as Gilgamesh, who is depicted as the strongest of all Eternals.

Kingo is an Eternal who can fire bolts of cosmic energy from his hands and poses as a rich and famous Bollywood star among humans. Phastos, who is presented as the first openly gay superhero in films, is the brains behind the weapons and technology that the Eternals possess.

Sprite, who can create illusions, physically looks like a pre-teen kid but is a mature person trapped in the body. Makkari is a deaf Eternal — also the first deaf superhero in the MCU. Her strength? Hyper speed.

Druig is the 10th Eternal. Though a loner who stays away from his fellow Eternals, Druig is extremely powerful because of his ability to control others’ minds.

Brian Tyree Henry is Phastos, Lia McHugh plays Sprite and Lauren Ridloff runs through the scenes as Makkari. Irish actor Barry Keoghan, who is known for a series of critically acclaimed films such as Dunkirk (2017), Calm With Horses (2019) and The Green Knight (2021), is Druig.

Among others are Kit Harington as Sersi’s human boyfriend Dane Whitman and Harish Patel as Kingo’s sidekick Karun.

Though the reviews are mostly positive, Eternals is far from the reception that MCU films are known for. The film had scored a Rotten Tomatoes rating of a mere 69 percent, at the time of writing, making it the third-lowest rated of the 26 MCU films released so far.

Giving an average review, Nicholas Barber of BBC writes, “Ultimately it seems that hiring a writer-director who specialises in muted, documentary-like dramas for an action spectacular about gaudily-costumed interstellar demigods may not have been the wisest choice.”

“Eternals may not be the worst of Marvel’s movies, but it’s undoubtedly the most disappointing,” Barber concludes.

Justin Chang of Los Angeles Times writes, “You walk out in the depressing realization that you’ve just seen one of the more interesting movies Marvel will ever make, and hopefully the least interesting one Chloé Zhao will ever make.”

Handing just one out of four stars, Johnny Oleksinski of New York Post writes, “Eternals, which will no doubt become a Jon Favreau punchline in a future Avengers film, need not exist in a universe that already counts the Fantastic Four and X-Men among its franchises.”

The Guardian gave the film two out of five stars. Reviewer Steve Rose remarks that watching the film gives the impression that at times “you’re watching a very sophisticated PowerPoint presentation.”

“It’s not exactly boring — there’s always something new to behold — but nor it is particularly exciting, and it lacks the breezy wit of Marvel’s best movies,” writes Rose.

However, some are more positive about Eternals. Among them are Brian Lowry of CNN, Oliver Jones of Observer and Owen Gleiberman of Variety.

Heaping praise on Zhao’s body of work, Gleiberman writes, “She’s a master craftswoman, and Eternals, while too long (157 minutes? really?), is a squarely fun and gratifying watch.”

“Adapting a relatively obscure comic into a sprawling epic, Eternals might be Marvel’s boldest bet since Guardians of the Galaxy, and that worked out,” underlines Lowry.

Jones gave the film a high rating of 3.5 out of four stars.

“Here is a movie that builds myths around characters whose outsized powers are matched by their emotions and whose epic adventures navigating immortality has left them with a shattered understanding of the nature and value of humanity. In the process, it helps us make sense of and find meaning in our own fractured world,” writes Jones.

Is there anything else interesting about Eternals in the film and comic books?

Yes, like almost all MCU movies, there are some differences between the film’s plot and the original storyline in Marvel comics.

A significant change is that in the Marvel comic books, the Eternals are early humans who were genetically created by the Celestials. This makes the Eternals in the comic books ancestors of modern humans.

The Marvel comics version of Eternals depicted a civil war between themselves. The losing faction left Earth to populate Titan. The race of the other Eternals came to be known as Titanian Eternals. Thanos and his brother Eros are members of this race. Thanos looked like a giant moving rock, because he inherited a suppressed Deviant gene from his parents.

The Deviants are also similarly created from humans but develop a somewhat hideous appearance due to the celestial experiments. Therefore, except those with shape-shifting powers, they cannot as easily blend in with humans as Eternals.

In the film, the Deviants are presented as having even more monstrous appearances.

Nate Moore, the film’s producer, had in January 2020 told ComicBook.com that though, like the comic books, no two Deviants look the same in the film, they take the shape of the predator they kill.

“So, they’re sort of bat-like Deviants. There’s a wolf-like Deviant. There’s a Deviant that look like all sorts of creatures from myth and legend in history,” Moore said.

While numerous Deviants in the comic books are humanoids and behave like Eternals, the only Deviant in the film shown capable of speaking and standing on two legs is their leader Kro.

Marvel’s Eternals are nothing like Avengers. While the latter is a group of individuals — normal humans, enhanced humans and one god — brought together when needed, the Eternals are like a single-family unit of cosmically modified humans/aliens whose powers rival that of any god in the Marvel universe.

Since this is a Phase 4 film, there is much more to explore about the Eternals and their interaction with other characters in the MCU towards the eventual build-up as was in the previous phase.