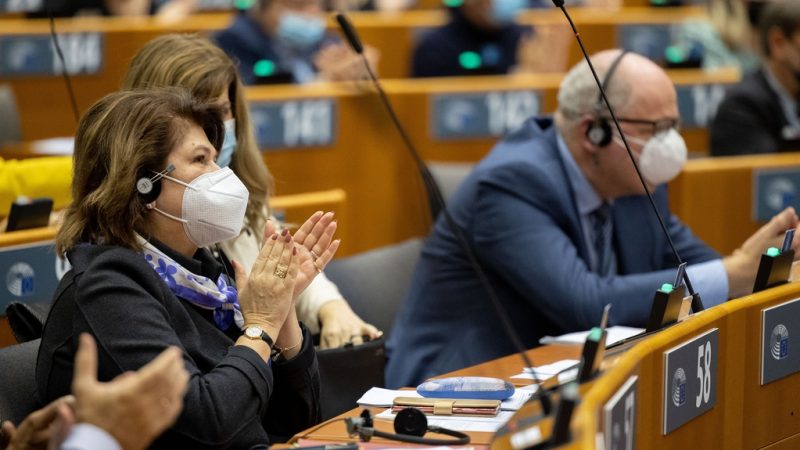 A year after the Polish Constitutional Tribunal’s ruling that de facto banned abortion, the European Parliament called on the government in Warsaw on Thursday (11 November) to lift the ban that puts women’s lives at risk.

In a resolution “The first anniversary of the de facto abortion ban in Poland ” adopted by 373 votes in favour, 124 against and 55 abstentions, MEPs called on the Polish government to ensure that no more women in Poland die because of this restrictive law.

The vote came following the death of a pregnant Polish woman in early November – who her family said died of septic shock after doctors waited for her unborn baby’s heart to stop beating – which electrified the abortion debate in the country and beyond.

Following her death, tens of thousands of people demonstrated on Saturday (6 November) in Warsaw and dozens of other Polish cities to denounce a nine-month-old abortion law blamed for claiming the life of a pregnant mother, organisers said.

On 22 October 2020, the Polish Constitutional Tribunal ruled that the provision of the 1993 Act on Conditions of Termination of Pregnancy was unconstitutional.

This act allowed abortions to take place in cases where a prenatal test or other medical considerations had indicated a high probability of a severe and irreversible foetal defect or an incurable illness that threatened the foetus’ life.

This entailed a de facto abortion ban, as the vast majority of legal abortions in Poland were based on these grounds.

Following the last 10 months, only 300 Polish women accessed abortion services in hospitals on the grounds of a threat to life and health.

Over the past year, Abortion Without Borders has helped 34,000 women from Poland access an abortion, which represents only a fraction of the total number of Polish women needing support to access this service.

On 20 October, during the plenary debate on the first anniversary of the de facto abortion ban in Poland, Equality Commissioner Helena Dalli, called on the member states to “ensure the respect of their obligations in line with international human rights law”.

“We stand in solidarity with the women in Poland who have shown resistance and resilience. Strong women’s rights are an asset for the whole of the European Union”.

The European Court of Human Rights has recognised the lack of access to abortion services as a violation of the right to family and private life.

Dalli also highlighted that the EU has no competence on abortion rights in a member state, and called on EU countries to “respect fundamental rights, which bind them by virtue of their national constitutions and commitments under international law”.

Samira Rafaela, a Dutch MEP from Renew group, said that “the anti-abortion law in Poland has been exceptionally harmful and changed the daily lives of Polish women and girls”.

“Thousands of women have crossed borders to Germany, England, the Netherlands and Belgium – amidst a pandemic, may I remind everyone. The Polish government has no respect for fundamental rights. They neglect women, they disregard our bodies, and they put women’s lives at risk,” Rafaela said.

“The resolution of the European Parliament on abortion is an unprecedented attempt to interfere in internal political issues of the Republic of Poland and is not covered by European treaties,” said Constitutional Tribunal President Julia Przyłębska.

Sirpa Pietikäinen, a Christian Democrat Finish MEP, called the Polish law “gross and aggravated offence to women’s rights” and warned that “we also need to keep a very close eye on what is happening in the other member states, for example in Slovakia”.

Therefore MEPs urged the Polish government to swiftly and fully guarantee access to safe, legal and free abortion services for all women.

EU lawmakers expressed concerns that, due to this restrictive legislation, women have to seek unsafe abortions, travel abroad to obtain abortions or carry their pregnancy to term against their will, including in cases of fatal foetal impairment.

Parliament thus called on member states to cooperate more effectively to facilitate cross-border access to abortion, for example by granting Polish women access to a free and safe abortion in other national healthcare systems.

Furthermore, MEPs condemned the increasingly hostile and violent environment for women human rights defenders in Poland and called on the Polish authorities to guarantee their right to express themselves publicly without fear of repercussions or threats.

They also strongly criticised the disproportionate use of violence against protesters by law enforcement and urged the Polish authorities to ensure that those who attack protesters are held accountable for their actions.

Highlighting that the ruling on abortion is yet another example of the political takeover of the judiciary and the systemic collapse of the rule of law in Poland, MEPs asked the Council to include this issue in its investigation into the rule of law situation in Poland by expanding the scope of its hearings.