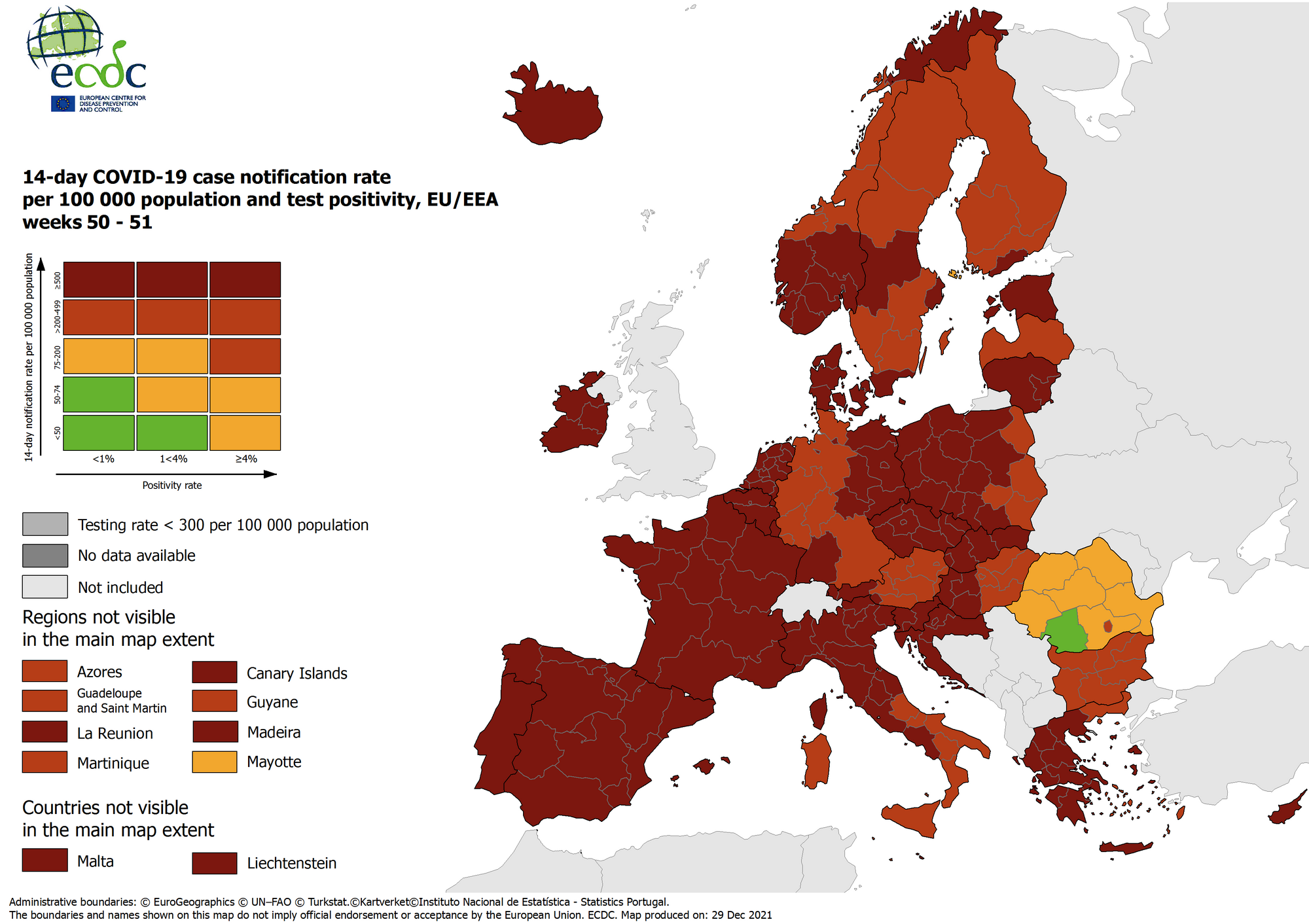 The European Centre for Disease Prevention and Control (ECDC) has advised once again that all persons refrain from taking any non-essential trips to the majority of European Union Member States.

The newly updated maps published in support of the Council Recommendation on a coordinated approach to restrictions of free movement reveal that a large share of countries within the block continues to be coloured dark red as they have had a cumulative COVID-19 case notification rate of 500 or more in the last 14 days.

Some of the countries that are currently categorised as dark red are Iceland, Ireland, Spain, Portugal, France, Croatia, Greece, Slovenia and Czechia. Regions of several other Member States are also part of the dark red list.

Wherefore, considering the high number of infections and the circulation of the Omicron variant, ECDC suggests that everyone avoid taking any unnecessary trips to these highly-affected areas, at least for now.

Only one European region, Romania’s South West, is currently considered epidemiologically safe as this region has identified less than 50 positive infection cases in the last 14 days, SchengenVisaInfo.com reports.

Despite the fact that the Member States imposed stricter travel rules that aimed to keep the COVID-19 and the Omicron variant under control, they are still reporting increased infection rates.

The data from the World Health Organization (WHO) show that the continent of Europe has reported 5,946,330 new infection cases in the last seven days. The EU Member states are currently positioned at the top of the table.

According to WHO, of all Member States, France has registered the highest number of infections -600,652 new cases reported only in the last seven days.

Moreover, the number of Omicron cases is also high. According to the ECDC, this is happening since the Omicron variant is now being acquired within the block rather than from travel to and from other affected countries.

“Several EU/EEA countries reported cases without an epidemiological link to travel. This indicates that community-associated spread of the Omicron VOC is occurring in the EU/EEA,” ECDC explained.

The data from ECDC shows that as of December 19, a total of 4,691 cases with the Omicron variant have been confirmed within the EU. However, since there hasn’t been made any official update on this data for the last ten days, the number of Omicron infection cases might have increased.