Australia’s east coast is bracing for another day of heavy rain, flooding, and gale force winds as a slow moving low-pressure system continues to roll across the nation.

A long line of thunderstorms formed stretching 2500 kilometres across the Northern Territory‘s Top End and southeast Queensland, according to Weatherzone.

Up to 100mm of rain has been dumped across much of central and eastern Australia since Wednesday evening.

In the outback Queensland town of Roma, residents were hit with torrential rain, hail and even cyclonic winds, forcing families to hide inside their homes.

One home had its roof torn off.

Rescue missions unfolded in northern NSW with four people having to be saved from floodwaters.

A road on the outskirts of Stanthorpe in Queensland completely washed away in one torrent, reminding motorists of the dangers of driving in floodwaters.

South Australia was also caught in the eye of the storm, with gale force winds of up to 70km/h lashing Adelaide. 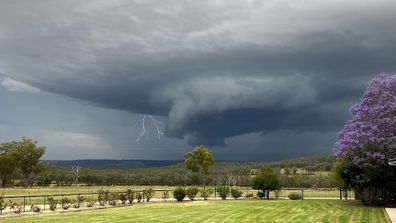 Dark clouds and deluge of rain across NSW and Queensland

Flood warnings are still in place across Queensland, NSW, with drivers urged to take care on the roads.

The Bureau of Meteorology (BoM) has issued a moderate flood warning for the Macintyre River, which winds through both Queensland and NSW.

Several minor flood warnings are also in effect for the Queensland’s south.

“Severe thunderstorms are likely to produce damaging winds and heavy rainfall that may lead to flash flooding in the warning area over the next several hours,” the Bureau of Meteorology (BoM) wrote.

Locations which may be affected include Orange, Goulburn, Yass, Parkes, Wagga Wagga and Griffith.

Victoria, which has so far been spared much of the destruction, is today expected to be hit with flash flooding and strong winds.

The BoM warned peak gusts of around 90 km/h are possible, before easing by Friday evening.

Rainfalls of 25-50 mm are likely across the warning area, with some falls of 50-80 mm possible across the Gippsland, it said.

Below is the forecast for the nation’s capitals.

Sydney will see a very high chance of showers today.

Winds will tend southeasterly 15 to 25 km/h before becoming light in the late evening.

It’s a similar story in Canberra, which will see a high chance of rain and the possibility of a thunderstorm, most likely this evening.

Temperatures will range from 7C to 16C.

Melbourne is bracing for a cold, rainy and windy day with a very high chance of rain.

Winds will tend south to southeasterly 30 to 45 km/h.

Temperatures will range between 10C and 14C.

Rain and a storm is highly likely for Brisbane today the BoM warns, adding the storm could be “severe”.

The city will experience a low of 23C before temperatures climb to 30C.

Rain is also on the cards for Adelaide. This will ease to showers later in the evening.

Winds will tend south to southeasterly 20 to 30 km/h.

The city will reach a low of 10C, before temperatures climb to 17C.

Tropical Darwin could see showers and a the chance of a thunderstorm.

Temperatures will range from 28C to 35C.

Perth will experience a mostly sunny with temperatures of 13C to 27C.

Hobart, like much of the east coast, has a very high chance showers.

These are most likely during this afternoon and evening.