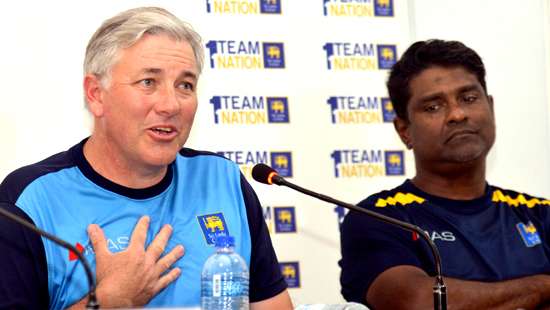 Not too long ago appointed Head Coach of the Sri Lanka cricket staff Chris Silverwood is worked up by what he sees in Sri Lanka cricket and believes he could make a distinction by way of his involvement within the set-up.

Silverwood takes up the place left vacant by Mickey Arthur, who was not awarded an extension to his two-year time period by Sri Lanka Cricket (SLC) final 12 months.

“What we have got here is very exciting and I think I can make a difference to it. And ultimately that is what made me want to take the job – to make a difference. I believe if we push the team, we can climb up the rankings and get back to that spot where Sri Lanka once was,” stated Silverwood, who linked up with the staff two weeks in the past.

The previous England coach, who was on the alternative aspect of the fence when the English toured Sri Lanka early final 12 months, has already earmarked he believes the staff wants to enhance and has wasted no time in making it know to the gamers.

“I have also specifically challenged the Test bowlers to be hot on their first 12 balls, because in the first 12 balls you can make a real impact in your spell as well as pushing the pressure back on the batsmen.”

He stated the early indicators have been optimistic.

Silverwood’s first task as Head Coach is the two-Check sequence in Bangladesh later this month, and he will probably be working with former nationwide participant Naveed Nawaz who was appointed Assistant Coach.

Nawaz, who utilized for the Head Coach place himself, stated that his main motive is taking Sri Lanka cricket again to its glory days and that he’s trying ahead to the chance of working with Silverwood.

“It is a great opportunity, and it is lovely to be working with someone like Chris who has got a wealth of experience working in England. Yes, I applied for the Head Coach role, but I still take this as an opportunity as long as both of us are on the same page. At the back of my mind the motive is bring back Sri Lanka cricket’s lost glory. That is all that matters to me,” he stated.

Nawaz who had a profitable stint as Beneath-19 coach in Bangladesh additionally shared his ideas on the circumstances that Sri Lanka will doubtless encounter this month on their red-ball tour of Bangladesh.

“Our first Test match is in Chittagong. Matches in Chittagong over the last few years have often gone to the final session of Day 5. The wicket tends to be very flat, and with both our team and Bangladesh having experienced red-ball batters, the game could be decided by the performance of the batters.”

“The second Test is in Mirpur which is on the slow side and takes turn, but overall, it is also batting friendly. The tracks in Bangladesh do not bounce too much, with the ball coming at knee-height and even the turn tends to be slow. I think the batters will enjoy the wickets in Bangladesh,” he remarked.

In the meantime, Crew Supervisor Mahinda Halangoda, when quizzed about Roshen Silva’s withdrawal from the 18-man touring squad, stated that the middle-order batter had indicated his incapacity to tour.

“He was in the squad but had travelled to play in England. The selectors informed him of his selection and requested he join the team back home, but he has decided to continue with his contract in England I believe,” Halangoda stated.

Silva has been changed by left-handed batter Kamindu Mendis who’s but to be capped within the longest format.