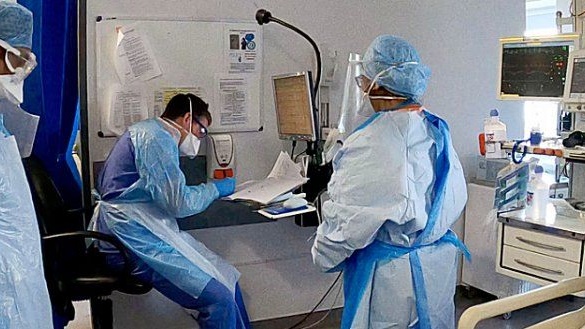 The crippling effect of Covid-19 on the health service has been likened by a senior consultant to planes crashing into every hospital in the country.

With the current surge expected to continue hitting services and cancelling procedures, doctors are painting a picture of staff under mounting pressure as the pandemic intensifies into the winter.

Dr Francis Finucane, a consultant endocrinologis at Galway University Hospital, said both inpatient and outpatient services have been severely hit.

“The Covid crisis is like somebody flew planes into every hospital in the country and knocked 50 per cent of our beds out and our capacity out,” he said.

Specialist care continues to struggle. In April the GUH team had planned for about two bariatric, or obesity, surgeries per week but have so far only managed about 10 in the last 12 months, delays in large part down to Covid.

“I think we have to anticipate that things will deteriorate further.”

Intensive care consultant Dr Andrew Westbrook described the last week’s cancellation of a transplant operation at the Mater Hospital in Dublin as “symptomatic” of the crisis caused by a lack of ICU beds.

Speaking on RTÉ’s Morning Ireland he said the system should have at least 550 across the country, according to a report published 12 years ago.

Despite a “slight increase” of 50 beds over the past year, between 150 and 200 more are required to bring Ireland in line with the European average.

“If we had that bed stock we could provide care for more acutely ill patients,” he said.

The HSE has already set the tone for a significant curtailment of services in some larger hospitals with chief operations officer Anne O’Connor warning of substantial cuts in elective procedures. Focus is shifting as hospitals begin to seek out additional intensive care capacity and prepare for staff redeployment.

The Irish Hospital Consultants Association (IHCA) believes about 65 per cent of elective procedures over the next four months will not take place, citing further recent curtailments in Kerry and in Crumlin and Temple Street children’s hospitals.

“When the hospital system cancels major cardiac and other operations, when it ventilates people outside intensive care, it’s overwhelmed; that’s the definition of a health service that is already overwhelmed,” its president Professor Alan Irvine said.

The Association points to paralysing legacy issues going into the pandemic – since 2012 there are now 70 times the number of patients waiting more than a year for procedures, a demand-capacity gap expected to widen over the winter.

Prof Irvine said ED consultants are reporting about a 20 per cent increase in patient numbers, year-on-year, over the last week or so (the numbers are benchmarked against 2019 experience due to last year’s anomaly).

“In Limerick and in the Mater [hospitals] all intensive care beds have been gone now for a while and they are using surge capacity where you close a theatre and you open it up as a kind of makeshift intensive care unit,” he said. Although stressing he is not a public health expert, Prof Irvine believes the current experience makes further Covid restrictions inevitable.

As exhausted doctors and nurses continue to battle the latest surge, Dr Chris Luke, a veteran ED consultant of over 25 years, believes the pandemic will take a further toll on staffing.

“There will be a huge legacy and I fear that there will be an exodus from the emergency departments and even the ambulance service in time,” he said, comparing the pandemic, in medical demand terms, to a protracted conflict.

“The threat of burnout is greater and greater and of course the pandemic has been a hammer blow to those who are in a sense struggling to survive.”

Increasing pressure was spelt out by the University of Limerick (UL) Hospitals Group on Friday. It expects to stand down all elective procedures at some stage this week to redirect focus to the impending Covid surge. The group caters for almost half a million people in counties Limerick, Clare and north Tipperary.

“People will hear from us if we are going to take a decision to cancel elective work,” chief executive Colette Cowan told RTE radio. “We will be standing it down, that’s my prediction, in the coming days.”

Ms Cowan said that all large hospitals are expecting similar surges which now threaten a collapse in the health service. While this can be absorbed to some extent, non-Covid patients also continue to require Emergency Department (ED) treatment.

“It is as stark as it was in the very first wave of the pandemic,” she said.