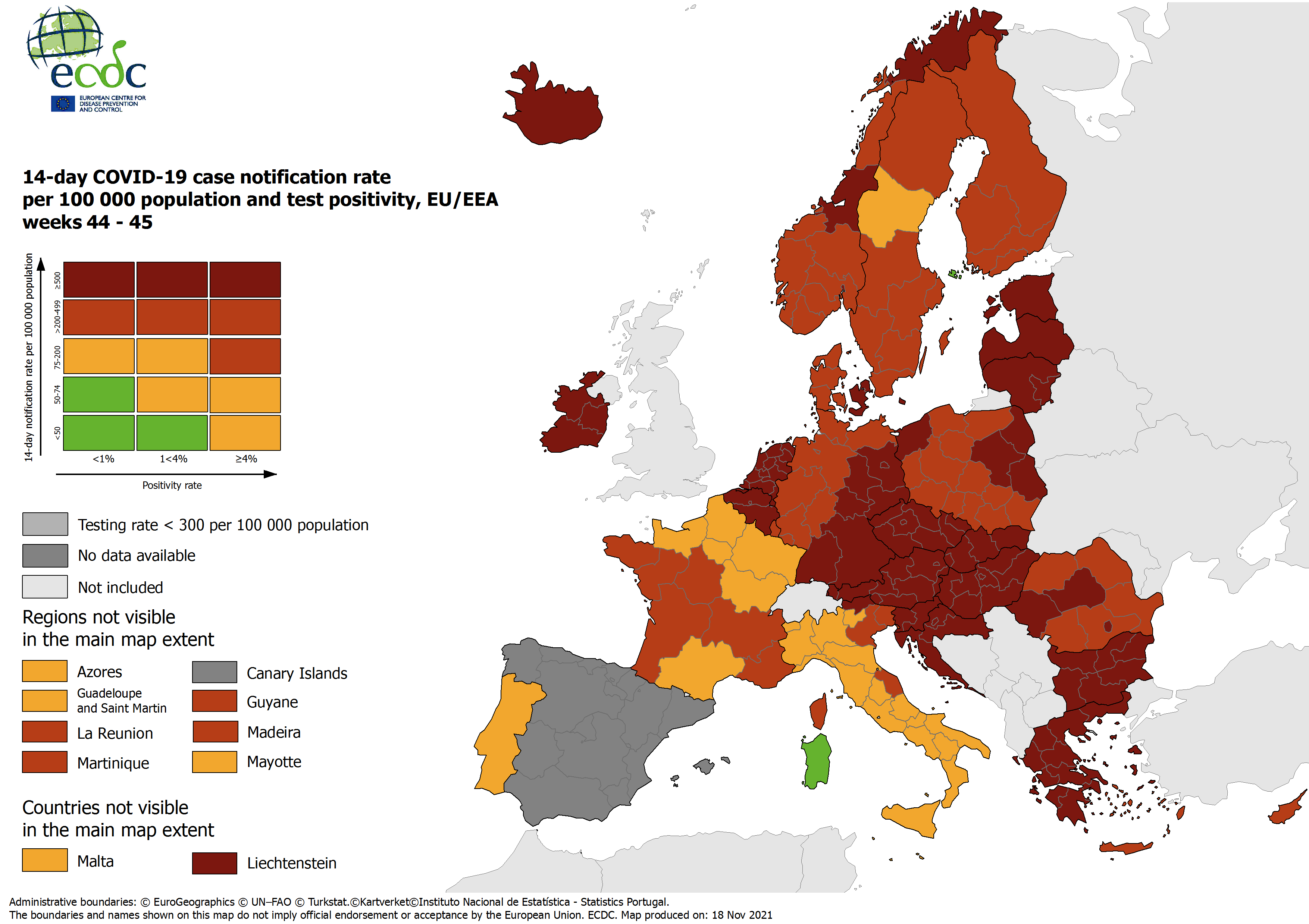 Due to another COVID-19 wave, which has hit the European continent, the EU Health Agency has advised that everyone refrains from travelling to the majority of the EU Member States.

According to the latest update of maps published in support of the Council Recommendation, the European Centre for Disease Prevention and Control (ECDC) has shown that most countries are dealing with increased infection cases.

Therefore, everyone, especially unvaccinated and unrecovered travellers, have been highly advised not to take any non-essential trips to or from areas that are currently part of the red or dark red list, SchengenVisaInfo.com reports.

Based on the data provided by the EU Health Agency, Iceland, Ireland, Belgium, the Netherlands, Czechia, Slovenia, Austria, Liechtenstein, Croatia, Slovakia, Hungary, Bulgaria, Greece, Latvia, Estonia, Lithuania, and half of Germany, half of Romania, and half of Norway are currently classified as dark red countries.

This classification has been made after all these countries have identified more than 500 COVID-19 infection cases per 100,000 inhabitants during the last two weeks.

According to the figures from the World Health Organization (WHO), of all countries that fall under the dark red list, Germany, the Netherlands, and Czechia have registered the highest infection rates during the last 24 hours.

Commenting on the current epidemiologic situation, WHO Regional Director for Europe, Dr Hans Henri P. Kluge, said that Europe is back at the epicentre of the pandemic, just like last year.

“According to a reliable projection, if we stay on this trajectory, we could see another half a million COVID-19 deaths in Europe and Central Asia by the first of February next year – and 43 countries in our Region will face high to extreme stress on hospital beds at some point through the same period,” Kluge said.

In addition, the same emphasised that there are increasing trends in infection cases across all ages and groups. However, of most concern has been seen the rapid increase in the older population groups.

Apart from the above-mentioned countries, Sweden, Finland, France, and Italy have also been registering increased infection rates. Still, the COVID-19 situation in these countries remains manageable compared to those that are coloured in dark red.

Travel to and from these countries is not as strongly discouraged as travel to countries placed on the dark red list. Nonetheless, everyone is advised to hold the necessary certificates and be cautious during the entire trip.

In contrast, only one region, Italy’s Sardinia, is part of the green list, which means that this area is currently the safest destination to travel to.