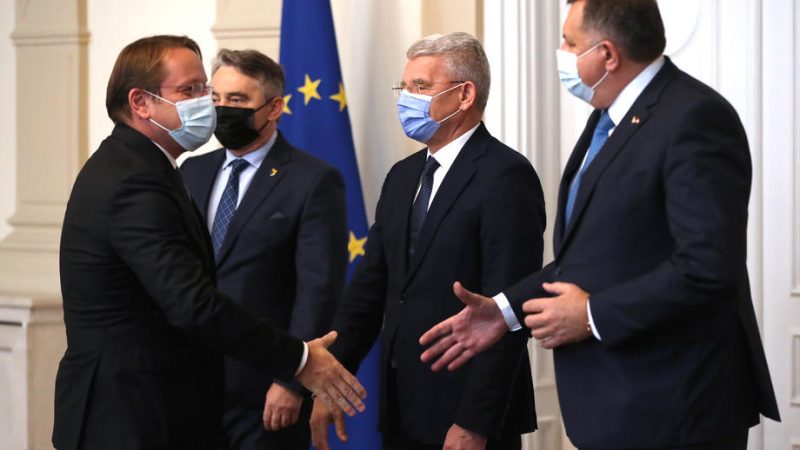 Following a letter from thirty EU lawmakers, the European Commission appeared to stand by its embattled enlargement chief on Thursday (13 January) and the statements issued after allegations were made in December that he had indirectly contributed to secessionist moves of Bosnian Serbs.

Bosnia and Herzegovina (BiH) is currently facing what many are calling the greatest instability since the 1992-95 war among Bosniaks (Bosnia Muslims), Croats and Serbs, which ended in a creation of a loose union of the Serb-dominated Republika Srpska (RS) and the Bosniak-Croat Federation.

The RS national assembly adopted a roadmap last month to withdraw from key joint institutions, including the military, tax system, and judiciary. The draft laws regulating what many refer to as RS’s step towards secession are to be drawn up within six months.

According to the leaked document, Commissioner Várhelyi told EU ambassadors in the country following his November visit that “the session would indeed take place but that a moratorium to pass legislation on the unilateral withdrawal from state institutions would be announced for a six-month period.”

“This had been agreed,” said the internal report, described as “shocking” by one diplomat in Brussels to EURACTIV.

In a letter addressed to the Commission President Ursula Von Der Leyen, a group of 30 lawmakers in the European Parliament, consisting mostly of socialists, liberals and greens, is now making it clear they want answers to what happened.

“As a neutral party with considerable influence, the Commission has a key role in ensuring that the”  Dayton peace agreement, which ended the war in 1995, “is respected on both sides”, MEPs wrote.

With MEP colleagues, we call for an investigation into Commissioner Varhelyi’s alleged role assisting Milorad Dodik’s separatist escalation in Bosnia-Herzegovina.

The EU needs to stand firmly and credibly on the side of peace. People in BiH and beyond deserve clarity on this. pic.twitter.com/Ihj0nXMfE6

“Needless to say that the Commission representatives cannot appear to appease separatist movements in this manner or act beyond their mandate contrary to official EU policy pertaining to the Western Balkan region,” the lawmakers added.

They asked von der Leyen whether she considered Várhelyi’s conduct in line with official EU policy towards BiH and whether there will be “a thorough internal inspection to determine whether his actions are compatible with his role as Commissioner”.

“We will reserve our answer to the questions raised by the MEPs to our answer”, chief spokesperson Eric Mamer told journalists on Thursday when asked about the letter.

“I believe that the Commissioner himself came out after the visit, which he made to Bosnia and Herzegovina in November, with extremely clear statements on the efforts that the public authorities of BiH have to undertake to pursue their European path.”

“And these statements are obviously, as you would expect, entirely representative of the EU’s and the Commission’s position in this in this matter,” he added.

Following the revelations, the EU’s outpost in BiH issued a statement confirming that Dodik had told Várhelyi about his plans to hold the legislative session “to begin a process of withdrawing competences” but “this does not in any way imply assent or acceptance of these plans.”

“Indeed, Commissioner Várhelyi argued against these plans,” the statement added.

The statement did not, however, address the allegations that there was an understanding between Várhelyi and Dodik that the session be held but a 6-month moratorium on secessionist legislation be announced.

From Budapest with love

Some EU countries, spearheaded by Germany, are calling for sanctions against Serb leader Milorad Dodik.

EURACTIV has learnt that at the meeting of EU countries at the technical level on Monday (10 January) on the Western Balkans region, Germans asked for an options paper from the EU’s diplomatic service on ways to proceed.

Diplomatic sources confirmed that Hungary was the only member state directly opposing sanctions, in line with the earlier public stance of Viktor Orbán, a close ally of Serbia’s President Aleksandar Vučić.

Hungarian foreign minister: We will veto EU sanctions against Dodik

He recalled that the new German foreign minister, Annalena Baerbok, …

Some commentators have pointed to the connection between Várhelyi and Viktor Orbán’s government in Hungary, for whom the Commissioner served as ambassador in Brussels prior to his appointment as the EU’s enlargement chief in 2019.

Várhelyi has repeatedly denied allegations that he was serving Budapest’s interests.

Katalin Cseh, a liberal opposition lawmaker and the main driving force behind the letter, said “as a Hungarian MEP, it is particularly important for me to send a message to the people of BiH, who are forced to relive the horrors of war— there is a Hungary beyond Viktor Orbán, which stands in solidarity with you in these difficult times.”