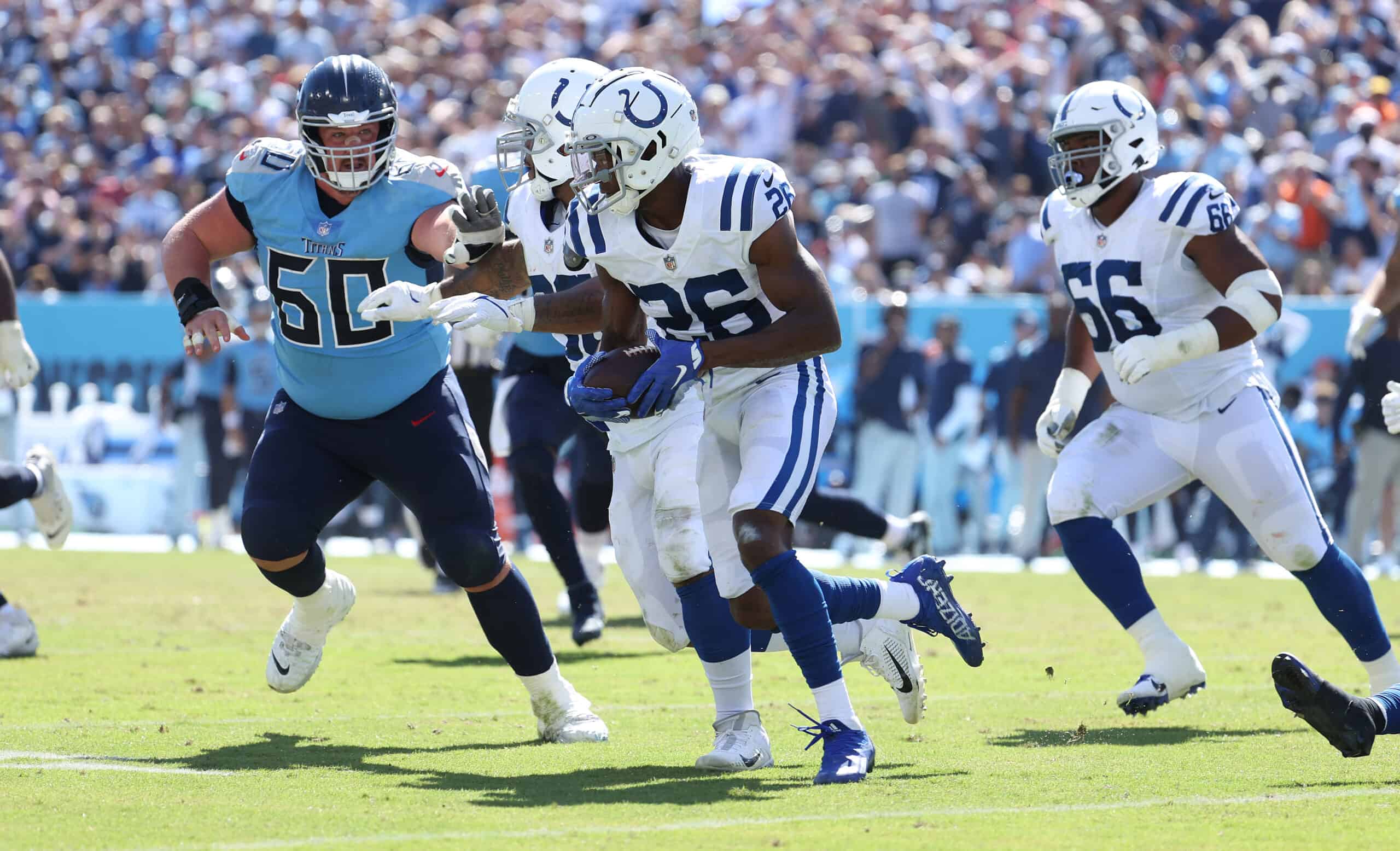 It wasn’t a pretty win for the Indianapolis Colts, but they got it done against the San Francisco 49ers.

They found a way to move the ball despite the drenching conditions at Levi’s Stadium on Sunday night.

Shanahan also said the 49ers aren’t doing anything else during their DB drills but focusing on fixing their pass interference issues and finding the ball in the air. He said it’s “way too bad” right now.

San Francisco’s infractions gave Indianapolis 122 yards and they converted those penalties into points.

More importantly, the Colts stay within striking distance of the Tennessee Titans for the AFC South title.

The Colts are at 3-4 and are two games behind the 5-2 Titans, who are coming off a dominating victory against the Kansas City Chiefs.

Their fight for the 2021 division title is a rematch of last year’s competition.

The Houston Texans and the Jacksonville Jaguars are years away from competing for the division title.

Therefore, the Colts and the Titans consider each other the most serious threat to an automatic playoff berth.

Historically, the Titans have won three AFC South crowns while the Colts have nine.

However, Tennessee edged Indianapolis for last year’s title due to better performance during their head-to-head games.

The spread on the Titans b Colts game is currently TEN +0.5. That is a steal. I don’t see any way the Titans don’t win by at least 7.

But for the foreseeable future, these two teams will be jockeying for position at the summit of the division.

With 10 games remaining for both teams, the Colts can still make a push to unseat the Titans from the top spot.

That’s five winnable games for the Colts that can give them at least eight wins.

However, they might get extra motivation defeating the Tampa Bay Buccaneers and the Las Vegas Raiders at home.

10 wins might be enough to win the division, depending on how the Titans finish the regular season.

Derrick Henry is the heart and soul of Tennessee’s offense, and they’re toast when he doesn’t have a big day.

But left on their schedule are some teams with solid run defenses.

They will face the Los Angeles Rams, New Orleans Saints, and the Pittsburgh Steelers, who are in the top half of run defense rankings.

If they drop those games, Tennessee will have five losses, leaving them with a rubber match against the Colts for the division.

That crucial encounter will occur next week at Lucas Oil Stadium.

It may be a Week 8 game, but it can decide the division, granted that the scenarios above fall into place.

A win by the Colts will put them closer to the Titans at 4-4.

That victory will strengthen their case for a Wild Card spot, but that isn’t a guarantee for an automatic postseason berth.

Therefore, Indianapolis would like to overthrow Tennessee for the division title, and they will need this game badly.

🚨Wardrobe check🚨: The @Titans will be decked out in the icy whites — white jerseys, white britches, with the navy socks — in Sunday’s game at the @Colts. ❄️ 👖#BritchesReport. pic.twitter.com/oyteFiFdFV

They have an average run defense that can help them slow down Henry when he gets the ball.

Meanwhile, Tennessee’s defense gave up 38 points to the Bills and is 24th in pass defense, allowing 273.6 yards per game.

Derrick Henry has more rushing TDs (10) than 30 of the 31 other teams. pic.twitter.com/2UKNMIWBCk

However, their pass defense ranks ninth, surrendering 103.3 yards per contest.

The Colts must play the odds correctly to win over the Titans and tighten the AFC South battle.