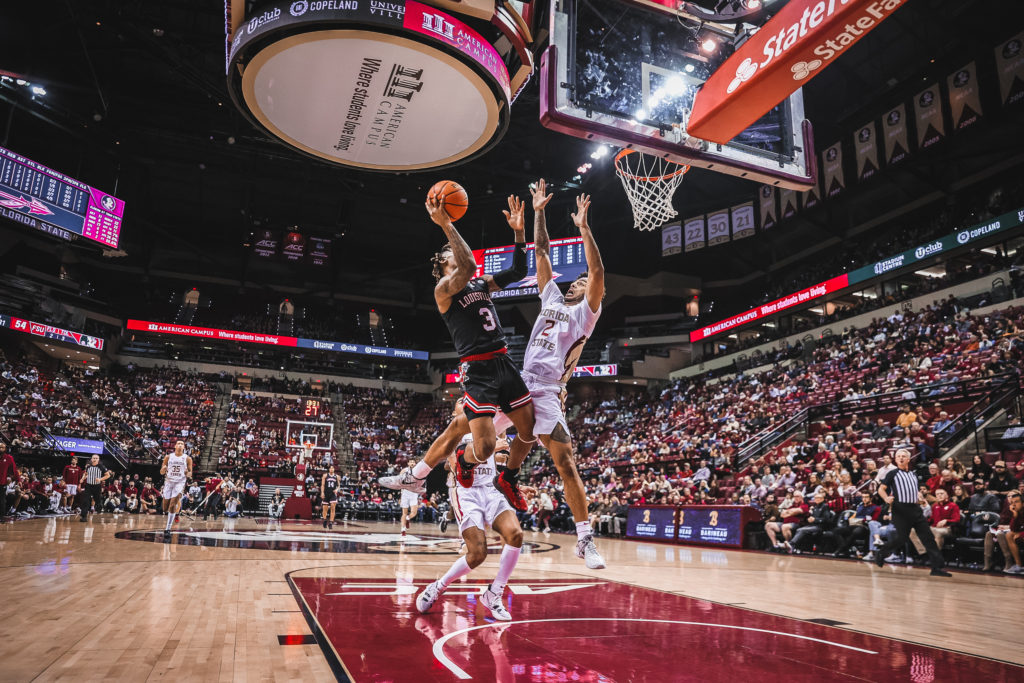 After an historically bad out of conference start to the season for Louisville basketball, a 4-0 start to the ACC is a step in the right direction for this team. This start to conference play could be a result of a weak ACC, but that is no reason to take away from what the Cards have done recently. Some guys are stepping up and I think this can be a huge confidence boost early on.

Win at Georgia Tech Starts the Week in the Right Direction

Coming off a big win at home against a relatively good Wake Forest team, Louisville went to Atlanta and beat Georgia Tech 67 – 64. Josh Pastner tried to bring back the magic of the famous face shield, but that couldn’t even help Georgia Tech.

Now, this is not the same Yellow Jacket squad that won the ACC last year, but one that returned Michael Devoe. He had 23, but missed two crucial shots at the end of the game helping Louisville escape Atlanta with a win. The big story for Louisville was the return of Malik Williams. Coming off the Covid list against Wake Forest, this was his second game back. The Louisville big man led the way with 20 points and 10 boards. Everybody knew coming into the season that this team would go as Malik Williams. His absence was very clear in the WKU loss. He adds an inside game for the Cardinals. Where they have struggled all year. An important win to start 2022 for Chris Mack, who had a rough 2021.

This was a game that was very important to string two ACC wins together back to back. Not the best opponent, but no apologies for getting a road ACC win early in the season, to get things started in the right direction.

A really ugly game Wednesday night at the Yum Center led to a three point victory for the Cardinals. This game gave mixed signals. On one hand, this Pittsburgh team is really bad. Going into this one they were 5-9 and winless in the ACC. A team that I would have like to see blown out. On the other hand, it is good to see this team win tough games. Win games when not everything goes your way. The tough games build character and ultimately a stronger team down the stretch. Winning these close games is what is necessary to win in March. So in that way, it’s good, but man that Pittsburgh team is BAD.

The most important part of this game for Louisville was the bench stepping up. In particular Sydney Curry and El Ellis. The junior college transfer, Curry, provided a nice boost off the bench scoring eight and rebounding eight. With Jae’lyn Withers struggling as much as he has another consistent option outside of Malik Williams is very important for this team.

When El Ellis is on, it can be electrifying. He was on Wednesday night scoring 18 points, including this spin move and finish.

I really like this guy. The athleticism and ability to attack the rim is something the Cardinals have been needing early in this season. I would love to see him get more minutes especially when he plays like he did Wednesday. The dude can score and the offense has struggled big time. He can also inject the team and the whole arena with energy. It was nice to see some other guys step up and provide a boost off the bench. The Cardinals are going to need more of that throughout the season in order to make some noise in March. Louisville continued to move things in the right direction setting up a date Saturday night in Tallahassee with the ‘Noles.

Just when you think things are looking up a trip to Tallahassee ruins the week. Florida State has not been a good basketball team, but they looked like one Saturday night. Leonard Hamilton has also had Louisville’s number. Florida State just suffocates the Cards every time they play. Not enough production from the ‘star’ players was the story in this game. Malik Williams was not good but only took six shots. Matt Cross was horrendous, shooting two for eight from three. Not enough El Ellis and Sydney Curry for some reason. Curry only got 14 mins of playing time. El Ellis was good again. He scored 14 points and added 3 assists. I wouldn’t mind seeing Ellis get some starts and get a good amount of minutes.

I’m hoping that this isn’t a sign of things to come this season when playing a decent ACC team. I do have hope that FSU is just a bad matchup for the Cards as they have been in recent years. The ACC is obviously down, but can Chris Mack and the Cardinals win the games they should? I don’t know that answer for sure but as of now, I would say probably not.

The Cardinals have two games this week. NC State comes to the Yum Center Wednesday night. Louisville beat the Wolfpack in Raleigh earlier this season. A season sweep of the Wolfpack would be nice. They then travel to Pittsburgh to play the Panthers again. Hopefully, this game is a lot less stressful than the one played last week. A 2-0 week is definitely attainable and gets things back in the right direction.

For more Louisville sports make sure to follow me on Twitter! For the best sports take and coverage be sure to check out Belly Up Sports!