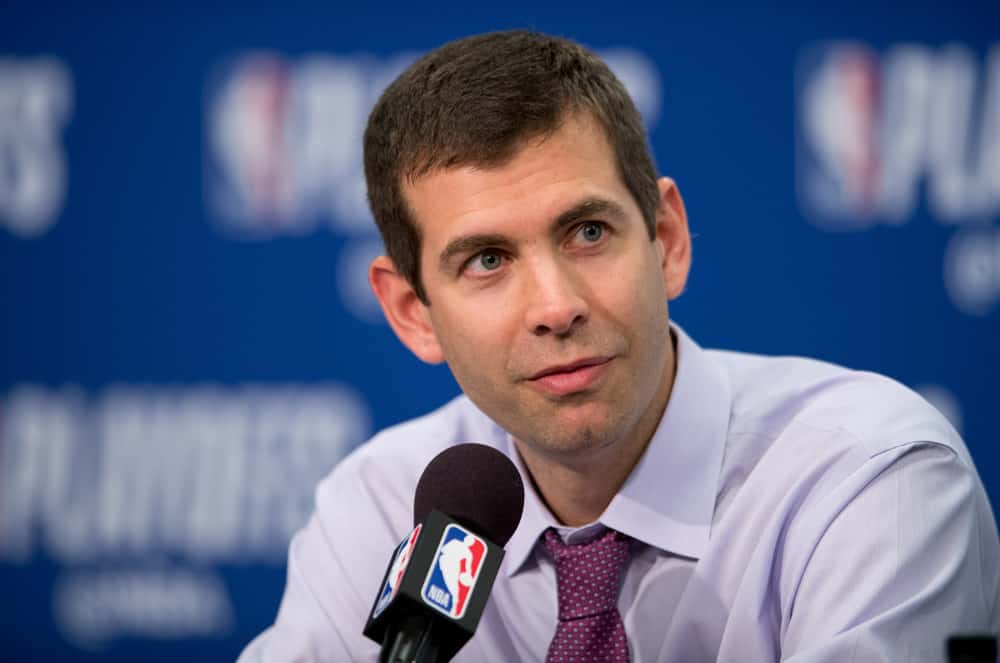 The Boston Celtics have had a rollercoaster start to the 2021-22 season, and trade rumors are flying around.

Brad Stevens went onto 98.5 The Sports Hub and shut down the Jaylen Brown for Ben Simmons rumor with two words:

In the interview on the Celtics’ flagship radio station, Stevens also revealed that Jaylen Brown’s injury is minor:

“Not worried about it. I think he feels better than he’s felt in any of the previous times that he’s done it.”

It is helpful for the Celtics that he will be back soon.

Jayson Tatum and Dennis Schröder need to step up, but they can only shoulder the load for so long.

While Brown has been out, Shams Charania reported the Celtics’ original interest in Simmons:

There was some skepticism from Celtics fans when the report was made, especially because Brown’s name was mentioned.

It makes sense that there was skepticism because Brown had shown some brilliance on the court already this season.

He already set a new career-high in points this season:

Jaylen Brown’s career-high 46 points tonight were the most ever in a @celtics season opener 🤯 pic.twitter.com/RjiRtxs0j1

Unfortunately, the performance came in a loss.

It is a small sample size though for the season.

The 25-year-old guard/forward has seen some decent success in his five full seasons with Boston.

He has averaged more than 20 points per game each of the previous two seasons.

He should do the same this year, as he hopes for new career-highs in points, 3-pointers, and free throws.

Why would the Celtics send a top-two player on their team to a rival for a player that has already shown to be a clubhouse nightmare?

The Drama Between the 76ers and Ben Simmons

Simmons, who is set to lose millions of dollars in his holdout, has played at least 57 games for the 76ers each of the last four seasons.

Since Doc Rivers expressed some frustration about Simmons being the 76ers future point guard in the 2021 playoffs, it has gone downhill for the franchise and the star player.

Simmons’ confidence dropped to what seemed to be an all-time low in the 2021 playoffs.

This horrendous performance came after shooting 61 percent from the line during the regular season.

He has shot 60 percent from the free-throw stripe during his career.

It sounds like the Celtics will not be paying full price for a Simmons trade.

Therefore, it is understandable that Stevens decided to squash the trade rumor.

The Recent History of the Celtics and 76ers as Trade Partners

With the 76ers looking to find a trade partner for a disgruntled Simmons, the Celtics seemingly could be the one.

Boston and Philadelphia have been trade partners twice since 2017 after 15 years without a trade.

The most notable transaction was the following Danny Ainge draft pick special prior to the 2017 draft:

However, Daryl Morey took charge of Philadelphia in 2020, and he has not made a trade with the Celtics since 2012.

For those wondering, it involved Courtney Lee going from Houston to Boston.

Bringing us back to the 2021-22 season, we will have to see if the Celtics have any more interest in Simmons.

However, it does not seem like Stevens or Morey will budge in a trade involving the guard from Australia.