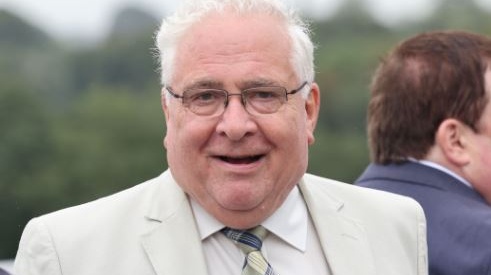 Never mind people not getting PCR tests. What about Bernard Durkan?

He’s been asking for an urgent probe for the best part of a week.

The TD for Kildare North is so distraught he’s climbing the balls, which is not advisable now that the cold weather is here.

And yet he is a very happy man. Blatherballs Bernard has hit the jackpot, winning days of media coverage thanks to his clever crusade against mathematics on behalf of everyone who ever dreams of winning the Lotto.

Fine Gael’s Pythagoras of the parliamentary party examined the law of probability and worked out that two silly press releases to the power of one fun-starved media equals loads of good humoured coverage all over the place.

Bernard’s battle with science began when he realised the Lotto jackpot, now worth more than €19 million, hadn’t been won since June with twice-weekly rollover draws failing to yield a big winner. He became suspicious about this, not least because “hundreds and thousands of National Lottery players” have expressed concerns.

His first move was to release a statement at the end of last week calling on the boss of the National Lottery “to drop a couple of balls as a mark of good faith”. This, he informed National Lottery chief executive Andrew Algeo, would make the draw more winnable.

“Mr Algeo, tear down those balls,” he wrote, because something must be done to make this game of chance more predictable. “We have to get to the root of exactly what’s at play here – are the 47 rollovers to date just pure chance, or are there flaws that need to be addressed?” Not only 47 rollovers, but 47 balls.

Then he added a line which will have cut the chief executive to the core: “This didn’t happen in Ronan Collins’s day.”

No, indeed. The RTÉ light entertainment supremo never had to drop any balls when he was hosting the Lotto draw on television. Although this may have changed as a result of regularly running a segment on his popular radio show called The Lunchtime Loosener-Upper.

Blatherballs Bernard would be more au fait than most with the type of machines used in selecting lottery numbers since he is a noted Gravity Drum (never stops banging on) and a fully working Random Word Generator.

Having enjoyed ball-to-ball publicity over the weekend, Deputy Durkan was hungry for more attention so he took his numbers racket to the floor of the Dáil on Wednesday. It may not be possible to guarantee winners in the National Lottery but Bernard was guaranteed another win in his second attempt when he managed to inveigle the Taoiseach into backing his proposal to haul the lottery regulator before an Oireachtas committee so he can be grilled over the balls.

In fact, the TD would like to see all the lottery big wigs questioned on the fairness of their draw which, he told Micheál Martin, had dented public confidence because nobody was winning the top prize.

If Mr Algeo appears, he’ll be the one sitting with his legs crossed when Bernard starts asking questions.

Blatherballs told the Taoiseach of “the concern expressed by hundreds of thousands of National Lottery players who have supported a good cause for many, many years and whose confidence has wavered in recent times by virtue of the fact that the main prize has been rolled over for almost six months – a precedent which, obviously, was set in 1913 in Monte Carlo and later in Las Vegas”.

Obvious to the Pythagoras of the parliamentary party and letter writers to The Irish Times who know sums.

And Minister McGrath isn’t one for laughing that much.

Bernard continued in all seriousness.

“Given the important work done by the National Lottery and the public confidence needed to support it, can I ask the Taoiseach if it might now be appropriate to refer the matter to the Committee on Budgetary Oversight and the Minster, and with the possibility of the regulator making an appearance in order to expedite the review already in hand in the Minister’s department?”

“I have noted of late Deputy Durkan’s tenacity and persistence on the issue of the lottery and the necessity for somebody to win the prize,” replied the Taoiseach. “It could be taken up by the Committee on Finance, I think you’re a member of that, you could invite in the regulator which governs the licensing of the Lotto. We all have high estimations of ourselves but my capacity to produce a winner in the lottery, Deputy Durkan, I would have to concede, I don’t think is within my grasp right now.”

Although it might be easier than fixing the health service or solving the housing crisis.

He wished Bernard every success in his efforts whereupon Blatherballs lashed out a second statement repeating the points he made in his first one because they worked so well for him last Friday.

In a wonderful, non-gambling related stroke of very good luck, it seems Bernard had fallen into favour with one of Fine Gael’s backroom wordsmiths, and a savvy one at that, perhaps someone with newsroom experience?

The statement was peppered with one-liners.

“It’s high time to see what’s going on inside that machine – let’s see what is making those balls spin!”

“Sales are up, yet the winners are down. The Lotto is like Manchester United, cash being splashed about every week, but a long barren spell sustains with nothing to show for it.”

“Questions surrounding the longest running rollover in the history of the game” must be answered. “Full investigation” warranted. “People have questions and the regulator, who is responsible for the monitoring of the operation of the Lotto, must provide us with answers. The regulator must outline what steps can be taken to provide the public with clarity and reassurance.”

Blatherballs Durkan has even gone as far as writing to the Minister for Public Expenditure to express his concern. Michael McGrath may be examining how Lotto funds are disbursed, but “we need to go further and investigate the operation of the game itself now”.

One of his suggestions in his first statement was to bring back the official from one of the big accountancy firms who used to stand silently at the back of the studio scrutinising Ronan’s balls as they rolled out in the big TV draw.

Because as it stands, the prize is “unwinnable” and “the prospect of winning is so remote that punters must be thinking Shergar would have a better chance at winning Squid Game”, Deputy Durkan said, and if he wrote that line himself his writer is now worth €19 million and a bonus ball.

Bernard knows well that, short of a ball reduction operation, he can’t alter the mathematics to provide for regular wins.

He’s been the big winner out of this pointless but entertaining diversion. The only reason he hasn’t been arrested for animal cruelty is because the horse he’s been flogging for the five days was dead to begin with.

Good effort though. Durkan is the oldest TD in the Dáil (Oldenballs Durkan?). If this were the UK he would have become Sir Blatherballs years ago. And they give their lottery machines names across the water.

Surely something there for the regulator to act upon?