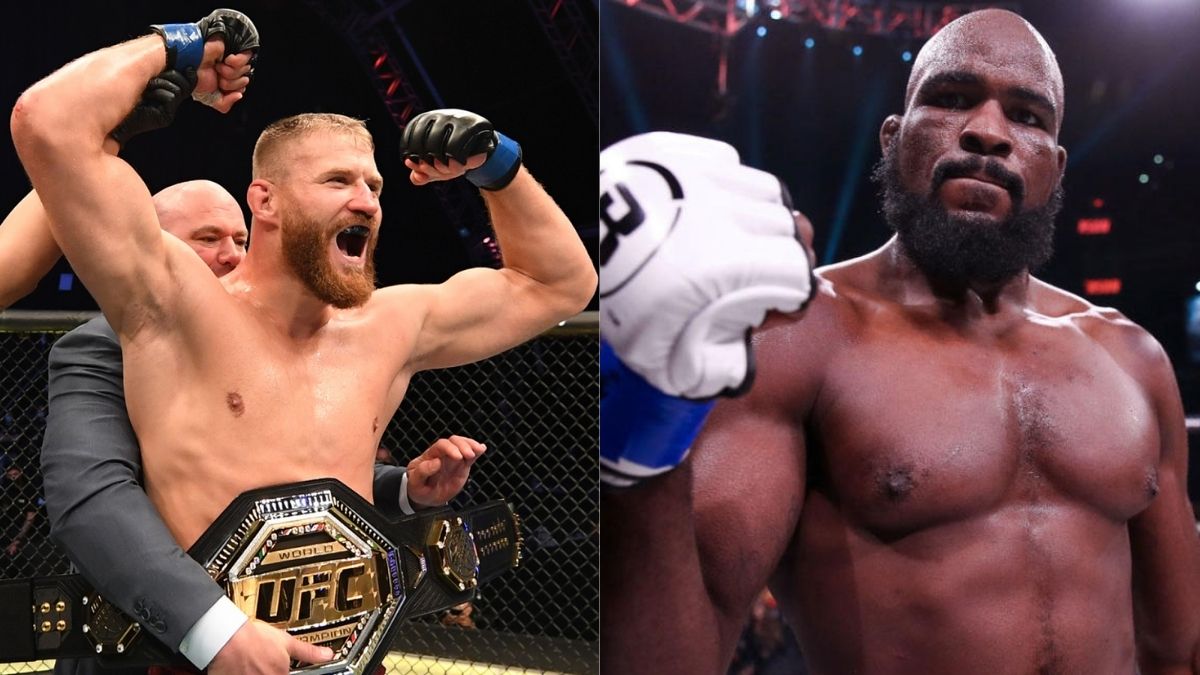 Sports fans love trilogies, especially when it means something. The one that many wish would happen is Cyborg versus Amanda Nunes. But Dana White doesn’t cross-promote; at least anymore. Once he was burned by PRIDE, he swore he’d never do it again. Like him, his tactics, or not; the man’s stuck to his words. Now two former rival light heavyweights go at it online. In a Blachowicz Anderson part three.

This is nothing new in this day and age; however, the fact that Corey Anderson is coming into his own now makes this interesting. What would happen if he and Jan Blachowicz let the leather fly for a third time? It probably won’t happen. However, it’s intriguing to think about, and some fans ARE curious.

Anderson’s lit up the competition in Bellator, and he’s now one win away from gold. That was never going to happen in the UFC. Whether it was just bad luck of the draw, White not being a “fan” of his, hatred towards Ali Abdelaziz, or whatever. Even after “Overtime” confronted Jon Jones at an autograph signing, White wouldn’t book a title fight. So fast forward to today, Anderson and Blachowicz take to social media; for a verbal trilogy.

It all started with the 38-year old Pole:

Hold up… So a guy who bolted from the UFC after I’ve slept him and almost made him retire, got a couple of wins in the 2nd league and claims he is the best?
Maybe I’ve punched him to hard… No class in win or defeat Corey. There’s levels to this. 🤦‍♂️

Then the New Jersey native fired a right hook in response:

🤣🤣🤣 Let’s not forget. What happened to you the 1st time I left you looking like elephant man. And you posted “I need to go home and rethink my career”.
Yea I got knocked out in our 2nd fight (lucky punch?) but I made you my broad for 15 min straight nothing lucky about that. https://t.co/q5kSRUVt48

He then posted the pics from Blachowicz that night.

And fans on both sides are responding with tweets that would make Jon Jones blush and shake his head. Thankfully he hasn’t chimed in himself… yet. Makes you think he’s like JAWS just waiting for the right second to grab a surfer.

As the duo argues who’s the best 205er on the planet; let’s remember, right now a Russian nightmares holding the Bellator strap. Vadim Nemkov regardless of gender, or weight is one of the most complete fighters in MMA right now. Is he GSP-esque? No, but the cerebral fighter hasn’t lost in nine-fights, and has seven finishes in that stretch since 2016. In the upcoming fight for Bellator gold, which most likely goes down late January or late February; Scott Coker may have the winning argument for best light heavyweight under contract.

Once Bellator locked up not only Anderson, and Rumble Johnson, but Yoel Romero is when Coker publicly saying his 205ers were the best around. And with Jones moving to heavyweight, and those signings, at least on paper, he does have a solid argument.

The gap between the companies has shrunk, and continues to, across their entire rosters. Coker was asked recently about his ways compared to “other” company heads by John Morgan. He went into it being all about the “Bushido Code”, not about who runs a company. It’s probably one reason White never cared much for Anderson.

Blachowicz is the only one out of the three with one-hitter quitter power. However, he relies on being a counter striker. And that can be a negative factor. If Nemkov comes in straight and isn’t aware of the right hand, he’ll get slept. And he can’t allow Anderson to control the pace. Nemkov’s kicking game maybe a factor, but then he needs to watch out for level changes and takedowns. Anderson from top and Nemkov from bottom, isn’t a good mix for the Fedor Emelianenko pupil. Despite the Russian’s submission game. The elbows reigning down will be too much. Nemkov’s the youngest and is just figuring everything out. Anderson’s just so dialed in right now, it’s hard to bet against him.

Anderson’s been through the grinder, and can rely on that experience. The loss to Blachowicz came off of a mistake of being to close to a counter fighter. As a matter of fact his old boss; White said when he saw him flatten Ryan Bader, he said two words…; “oh s**t”. You can’t push aside how he feels mentally and emotionally now. Or how Mark Henry and the rest of his team are going to dissect every little whole Nemkov has.

Nemkov always coming forward may be his downfall this time. His kickboxing and skills on the feet are usually spot on. However, the boxing, distance management, and wrestling of Anderson may be the decider. Should Michael C. Williams declare “and new”; Corey Anderson, yes, the quiet guy from the Garden State that the MMA world has overlooked has to be looked at as the best light heavyweight in the game.

We may not see Blachowicz versus Anderson three. But everyone needs to prepare themselves for Anderson against Nemkov two, three, and maybe four.

For all your sports news, go to: Belly Up Sports. And for everything CYCLONE; go to: Facebook.