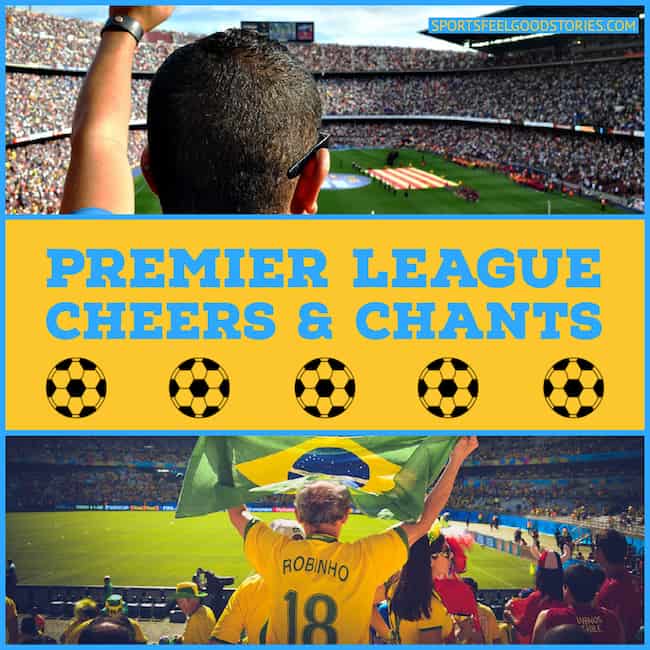 Premier League Cheers and Chants have become an integral part of the game of futbol for most fans.

One of the most significant aspects of soccer is the fan culture. The fans create great environments with cheers and chants throughout every game. The great benefit to this is a packed stadium with an atmosphere that players dream of.

The atmosphere in each stadium makes soccer unique. Fans chant throughout the match to create this compelling atmosphere.

From stadiums like Old Trafford and Emirates Stadium that seat over 60,000 fans to smaller venues like Turf Moor and Craven Cottage that seat around 20,000 fans, these stadiums provide all sorts of different environments for each game. Each match typically consists of a boisterous home crowd and a “loud and proud” away section.

The most iconic chant in soccer. Created for the 1945 musical Carousel, English band Gerry and the Peacemakers did their version in 1963 to bring the tune to fame.

Premier League giants Liverpool adopted it as their anthem, playing the music before every home match at Anfield for over five decades and even putting “You’ll Never Walk Alone” on their logo. The song is also played before some Celtic games and following moments of tragedy for other clubs throughout Europe.

We Shall Not Be Moved

This chant’s roots originate from the United States. It was initially created as “I Shall Not Be Moved” in the early 19th century by African-American slaves as an anti-slavery protest song.

The song made it overseas when English wrestler Big Daddy used it as his walk-on music. English soccer fans eventually grabbed hold of it, and it can be heard being chanted by several different teams’ supporters.

This chant originates from the United States’ “The Battle Hymn of the Republic,” written by Julia Ward Howe in 1861. The chant is believed to have been initially brought into soccer when Scottish club Hibernian created their version called “Glory, Glory to the Hibees” in the 1950s.

The chant made its way to England, where Manchester United created their rendition called “Glory, Glory Man United.” Other English clubs, such as Tottenham Hotspur and Leeds United, have also made their chant versions.

When the Saints Go Marching In – Southampton

The famous Christian hymn “When the Saints Go Marching In” has been recorded by Louis Armstrong and Bruce Springsteen. It has also been brought into the world of soccer by several different teams. Among the most famous renditions is the Southampton Saints, who use it as their theme song at St. Mary’s Stadium.

Let’s Pretend We Scored a Goal

This video is Tottenham fans pretending they scored a goal as they were down 4-0 against Liverpool in 2014. This takes the sarcastic cheer to another level.

Yaya and Kolo Toure are two brothers from Ivory Coast. They spent several seasons playing together at Machester City from 2009 until 2013. Over that time, fans created a couple of fun songs for them.

One-nil to the Arsenal

Chanted by Arsenal FC supporters when they have a 1-0 lead. Became a familiar chant towards George Graham’s tenure as Arsenal manager from 1986-1995. It was a sarcastic chant for winning several games in a row with a 1-0 scoreline.

Sunderland ‘Til I Die

Another famous chant is “Sunderland Til I Die.” Many English teams have this chant, but for Sunderland, they now have a Netflix documentary series about the club titled ‘Sunderland ‘Til I Die’ released in 2018.

Other clubs also use the famous Chelsea chant throughout the world. The tune is originated from the religious hymn “Lord of the Dance” written in 1963 by Sydney Carter. It is mainly chanted at away games to show strength in a foreign environment.

The rise of Leicester City forward Jamie Vardy was remarkable. His burst into fandom came in 2015 when he led Leicester City to their first-ever Premie League title. The Leicester fans had a chant for him since 2013, but it rose to great fame when he started having more and more success with his 24-goal season in 2015/16.

We Love You – Crystal Palace

This chant has become popular across all of England, most notably with Crystal Palace. It is believed that this chant initially came to England after Scottish club Celtic FC got it from German club FC St. Pauli.

Blue is the Colour – Chelsea

This Chelsea FC song was released in 1972 by Daniel Boone and Rod McQueen ahead of Chelsea’s 1972 League Cup Final. The Chelsea song has become one of the most popular chants throughout England. It has since been recreated by many other sports teams, including Vancouver Whitecaps and Molde.

West Ham’s anthem is originated from Ben Selvin’s Novelty Orchestra, released in 1919. The former No. 1 hit is believed to have been a West Ham chant since the 1920s. Punk rock band Cockney Rejects recorded this song for West Ham in 1980.

Marching on Together – Leeds United

Released in 1972, Les Reed and Barry Mason wrote the original Leeds United anthem. Leeds United players and supporters sang the original recording. The song is played before kickoff and the second half at every Leeds home match. This is one of the few club anthems created for a club, not a re-creation based on another song.

As you can see, the cheers and chants of the Premier League are all part of what it takes to be a true fan. We hope you enjoyed it.

Nathan is a sportswriter who covers a wide range of sports. Soccer and football are closest to his heart.

You are on our Premier League Cheers and Chants page.

15 tips for Motivating Athletes for Parents and Coaches