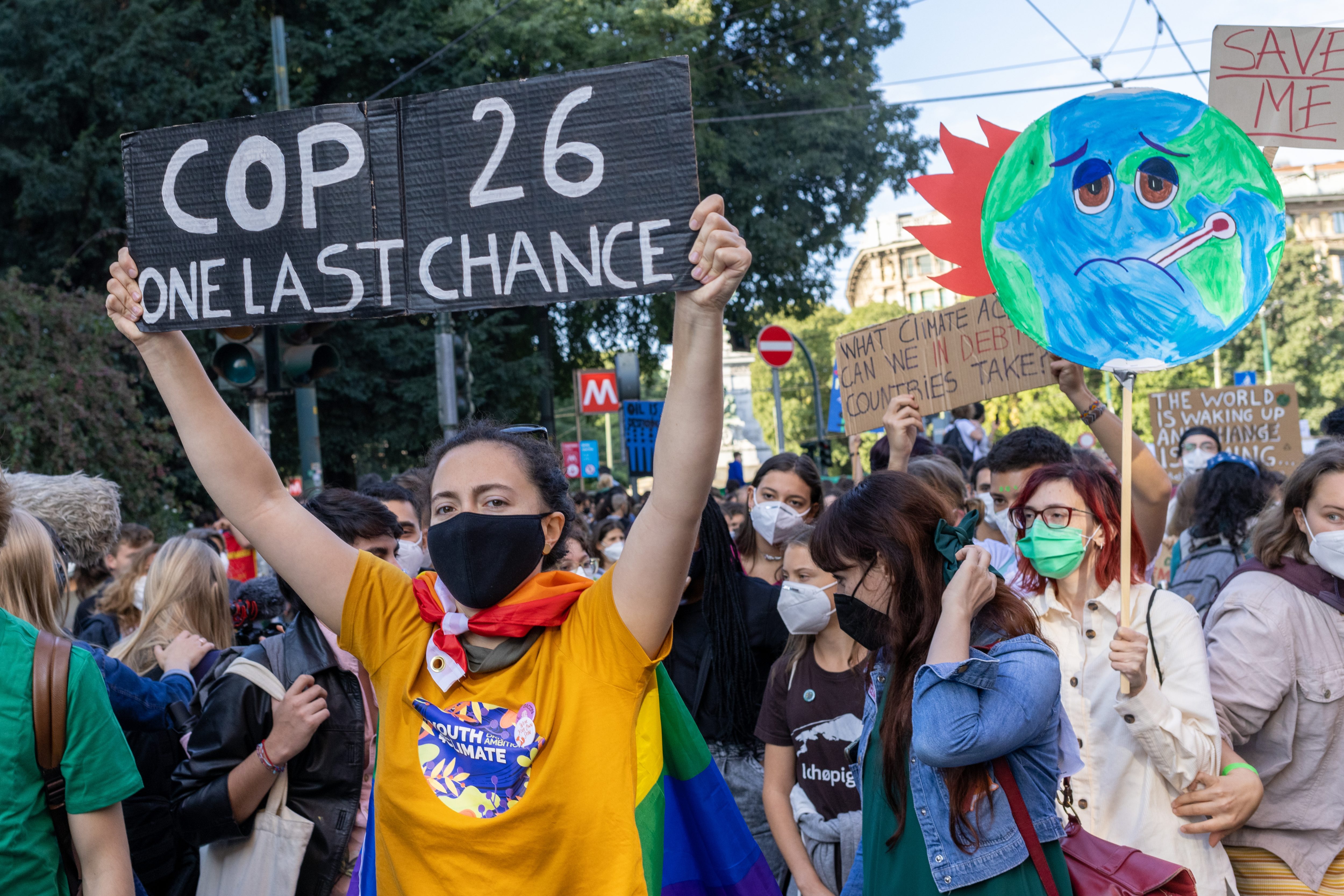 We have been involved in climate negotiations and policy for nearly two decades. In that time, we’ve never seen so many new scientific analyses or so much media coverage. Street protests in Glasgow and elsewhere include angry calls for greater ambition, amid an awakening of young voices calling for intergenerational climate justice and responsibility. The Glasgow summit of the last two weeks was hyped as the world’s last best hope to save the climate, but such a lofty goal was never going to be achieved at one event. There is much more work for leaders to do before next year’s climate summit in Egypt.

Every speech or article cites terrifying data. The planet is already 1.1°C warmer than in pre-industrial times, and the temperature is rising. According to the United Nations Environment Programme, there is a fifty-fifty chance that global warming will exceed 1.5°C in the next two decades. Even if countries fulfill their pledges under the Paris Agreement, global warming is estimated to reach 2.7°C at the end of the century. The remaining carbon budget to limit warming to 1.5°C is 400 gigatons of carbon dioxide (GtCO2), but the current global emission rate is 40 GtCO2 a year, implying that drastic emissions reductions must occur in next decade if we are to achieve the goal.

The World Bank estimates that if climate change is left unchecked, it will push 132 million people into poverty in the next decade and by 2050 displace more than 216 million people from their homes.

Experts repeat the same prescription time and again. We need to halve global carbon emissions by 2030 and reach net-zero emissions by 2050. But achieving these goals requires an effort unlike any that humanity has undertaken before. Meanwhile, poorer countries who have contributed the least to cumulative emissions have the most to lose from a changing climate. These issues were largely overlooked in the slow, consensus-based process at Glasgow, but will be crucial for the world to avoid the worst effects of climate change.

Phasing out coal-fired power plants is crucial to decarbonizing the global economy. The world has better ways to produce electricity; a recent study showed that in the United States, 80% of existing coal-fired power plants are more expensive to run than to swap out for new renewables. Nonetheless, coal continues to be an important fuel for power generation, especially in Asia and in the developing world, where plants tend to be younger and thus cheaper to operate.

Recently announced commitments to stop funding coal-fired power plants are encouraging. This year the governments of China, South Korea, and Japan, the three largest funders of coal-fired power plants, announced that they would stop funding such plants outside their borders. The G-20 countries made the same commitment at their recent summit in Rome. However, more than 80% of coal-fired power projects worldwide are private investments unaffected by this announcement. At Glasgow, India insisted on a last-minute change in language to pledge to “phase down” instead of “phase out” coal, a discouraging result, but still the first time that fossil fuels have been explicitly mentioned in a global climate agreement.

According to the International Monetary Fund, governments provided $5.9 trillion in implicit and explicit subsidies to fossil fuels in 2020, equal to 6.8% of global GDP. Most of this number is the implicit subsidy of underpricing the externalities of fossil fuel use, such as local air pollution and greenhouse gas emissions. Still, fossil fuels received $472 billion in direct subsidy in 2020.

The staying power of subsidies and the lack of pricing for externalities (such as a carbon price) demonstrates the challenge of pricing fossil fuels to reflect their true costs. The resulting increase in energy prices would be challenging for low-income consumers, who spend a greater portion of their income on energy and related services, like transportation. And in countries where fossil fuel subsidies prop up domestic energy production, as in India’s coal industry, are governments prepared to deal with the job losses and economic upheaval that could result from a recalibration of energy prices? At COP26, a group of wealthy countries agreed to an $8.5 billion partnership to help South Africa phase out coal, an effort which may provide an example for other developing countries to follow.

Oil is the dominant fuel in the transportation sector and is particularly difficult to displace. However, the International Energy Agency recently stated that no new oil and gas fields need to be developed if the world is on a path to global net-zero emissions by 2050. Moving away from oil depends on replacing oil’s primary role in transportation. Switching to electric vehicles is great when it comes to passenger cars and trucks that are frequently refueled, but long-distance shipping or aviation will require new solutions.

Despite the urgency to limit greenhouse gas emissions, some oil-producing countries are expanding oil extraction, for example, in the Ecuadorian Amazon. In oil-dependent developing countries, such as Angola, Azerbaijan, Congo, South Sudan, Timor-Leste, and Venezuela, more than 60% of fiscal revenues come from oil exports. How will these countries find a substitute for this income in only 10 to 20 years? Can any aid package or financial program provide energy security, and socio-economic development? According to U.N. Secretary General Antonio Guterres, “[o]ver the past 25 years, the richest 10% of the global population has been responsible for more than half of all carbon emissions, and the poorest 50% were responsible for just 7% of emissions.” A fair green transition must help fossil fuel-dependent economies adapt to the change.

4. Make sure the post-pandemic recovery is climate-friendly

The world’s largest economies are spending trillions of dollars to help their economies recover from the COVID-19 pandemic. However, advanced economies are not investing enough in the much praised ecological energy transition and green recovery. According to the latest U.N. Environment Programme Emissions Gap Report, of the $16.7 trillion that has been spent globally to May 2021 on COVID-19 recovery packages, only $438 billion is likely to reduce greenhouse gas emissions.

The Intergovernmental Panel on Climate Change estimates that at least $1.6 trillion per year are needed through 2050 to stabilize the climate at 1.5°C, but current investment levels are only 20% of that figure. The fiscal stimulus provides an opportunity for investment in a greener future, but thus far that investment is not occurring.

5. Speed up the deployment of renewable energy

Global energy consumption will increase 50% by mid-century, mostly to meet the needs of developing nations. The world needs not just low-carbon energy, but more energy overall. Renewable energy solutions are critical, but they are not an easy fix. We are told that renewable energy projects will create jobs, decarbonize economies, and protect the environment. In truth, it is difficult to phase out fossil fuels and satisfy growing energy demand at the same time.

The first step to a decarbonized economy is to decarbonize the electricity sector and electrify as many energy uses as possible. The costs of renewable electricity generation have plummeted in recent years, making it more affordable in the developing world where demand is growing. Nevertheless, electricity storage or other forms of generation are needed for when wind and solar generation are not available, and not all forms of energy use can be easily electrified. Wealthy countries must develop, pilot, and commercialize technologies to deal with these situations and share these technologies with the developing world.

6. Fix the debt crisis and fiscal stress in the Global South

The profound economic consequences of the COVID-19 pandemic have left developing countries with looming debt and less room to maneuver in their policies and finances. External debt of developing countries reached $10.6 trillion in 2020, the highest level on record and nearly a third of their GDP.

The pandemic made clear that curving climate change requires solutions that involve the whole of society and a realistic assessment of how far and fast we can go. It is not enough for wealthy countries to commit to aggressive emissions reductions and pledge to help developing countries with low carbon technology and capacity building. Nor is it enough to combine climate finance with debt relief and liquidity to ease the fiscal pressure for developing economies. Nor to respond to the needs of the most vulnerable by connecting poverty eradication, resilience building, and climate mitigation. Instead, all these actions must be taken at the same time, to achieve climate goals and the 2030 U.N. Agenda for Sustainable Development.

Wealthy countries must fulfill their commitment to mobilize at least $100 billion annually to support developing countries transition to green, sustainable, and resilient economies. This funding should be complemented with knowledge and technology transfer to boost renewable energy production capacity in the global south and devote 50% to adaptation and resilience building, especially for least developed countries and small island developing states.

COP26 in Glasgow offered world leaders a unique chance to address the sticking points impeding progress, not only reducing greenhouse gas emissions, but also addressing the economic inequalities and fiscal stress that limit developing countries’ capacity to move towards post-carbon economies. Instead, the closing of COP26 included apologetic words from the COP president, disappointment from the countries that are paying the highest price for climate impacts, and anger from activists and civil society. The Glasgow climate pact must be boosted by greater action from the larger emitters.

Egypt, the host of COP27 next year, has homework to do. Multilateral responses and solutions are the only way forward, but the unanimity that the U.N. process requires makes it a difficult way to achieve lofty goals. Achieving the goal to “keep 1.5 alive” can only happen through solidarity, shared but differentiated responsibilities, and the recognition that a healthy, stable earth system and climate are our most valuable assets. Perhaps smaller groups of countries, like the G-20 and G-7, can lead ambitious efforts to achieve our goals in addition to the wider U.N. process. Stabilizing the climate is about protecting human lives and livelihoods now, not about hugging trees for some imagined green future. That future starts today.