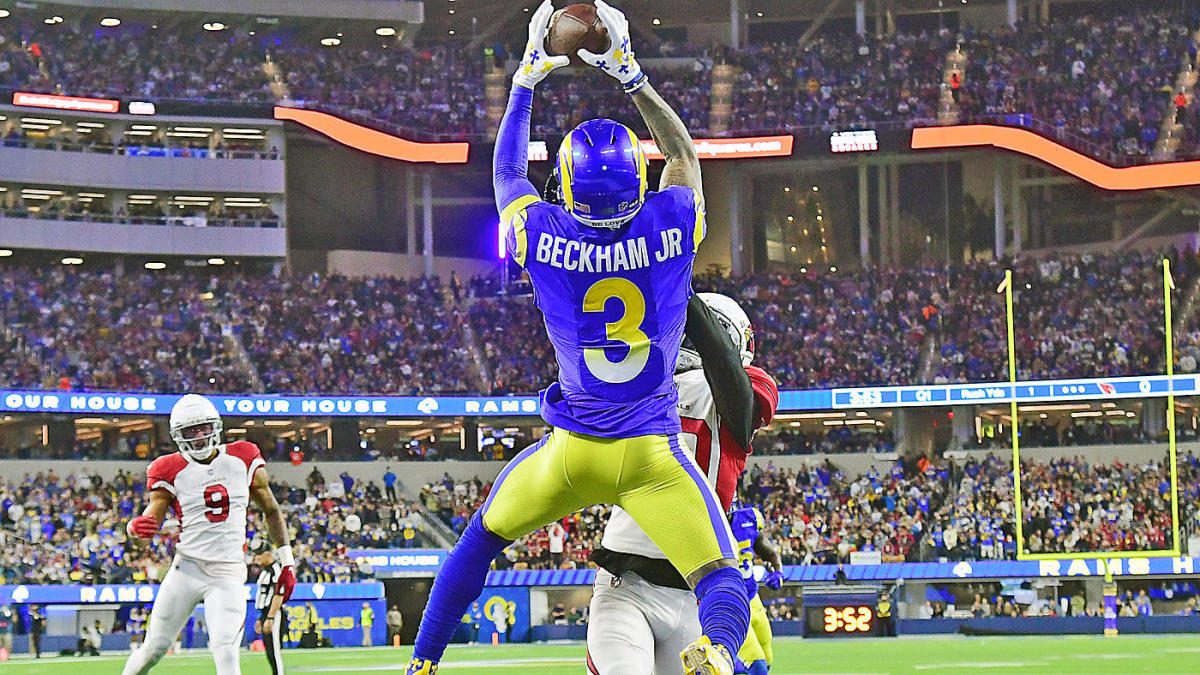 This past weekend, the playoff picture shrank from eight to four teams. There were some outstanding games, including the divisional game between the Rams and the Buccaneers. The game had fireworks left and right, but one player worth mentioning is Rams wide receiver Odell Beckham Jr.

As Los Angeles advances to the NFC championship, let’s reflect on how Odell got to this moment.

Drafted 12th overall by the New York Giants in 2014, he was a big-play threat at LSU. The team saw the potential in his game, which led to their decision to draft him.

After being listed as inactive for the first four games, Beckham made his 2014 debut against the Atlanta Falcons. He only finished with four catches, one of them being his first career touchdown (which I will always remember).

He would finish the year with 91 catches for 1305 yards and 12 touchdowns, giving fans a preview of what he can do. Also, he did this.

Odell played five seasons with the Giants, who traded him to Cleveland in 2018. Ironically, the team resigned him to a contract extension and former GM Dave Gettleman announced the team didn’t give him a new contract just to trade him. Many would argue as to which team won the trade, but it was unfortunate to see a top talent like Odell get sent to a team that hasn’t had a playoff win since 1995.

He finished his Giants career as Eli Manning’s favorite target, and Giants fans will still wonder about what life would be like if their team kept their star wide receiver. Nonetheless, his journey continued to the state of Cleveland, where he would team up with Baker Mayfield and Jarvis Landry.

There was hope in Cleveland that Beckham would help lead the Browns to the promised land. His relationship with Mayfield started well, with Beckham attending Baker’s wedding in 2019.

On the field, fans were excited to see these two score touchdowns. Odell finished with 74 catches and 1035 yards receiving in his first season with Cleveland. But, he only had four touchdowns in his first year with the Browns,

During the rest of his tenure with Cleveland, troubles began to come about between Odell and the team. There was a moment when Odell was wide open during a game against Denver. However, instead of throwing his way, Baker decided to force a throw to Landry. The funny part is: Landry was not open.

This isn’t the first time Baker intentionally ignores Odell. Take a look at this clip.

In all, his time with Cleveland did not lead to a playoff appearance, and the damaged relationship between Odell and Baker led to his release.

A New Beginning for Mr. Beckham

After breaking free from Cleveland, Odell Beckham Jr. was able to sign with any team he wanted to. His free agency ended quickly, as the Los Angeles Rams took a chance on the 3X Pro Bowler.

It was clear the Rams were going all-in this season. After all, they did acquire Von Miller in a trade to make their defense even more dangerous. Offensively, adding Odell to a wide receiver corps led by Cooper Kupp showed the Rams had the pieces to win a Super Bowl.

Beckham took on a bigger role after Robert Woods went down with an ACL injury, and has been productive since joining Los Angeles. After scoring no touchdowns with Cleveland this season, he has had at least one touchdown in six of the past ten games. One of those touchdowns was also his first career playoff touchdown, which you can see below.

As of right now, the Rams are still alive in the playoff picture and will face the 49ers in NFC Championship Game. Regardless of what happens, it’s been a roller coaster ride for Odell Beckham Jr. this season. But, the Rams were the perfect team for him to be on, and we can hope he remains a Ram for years to come.