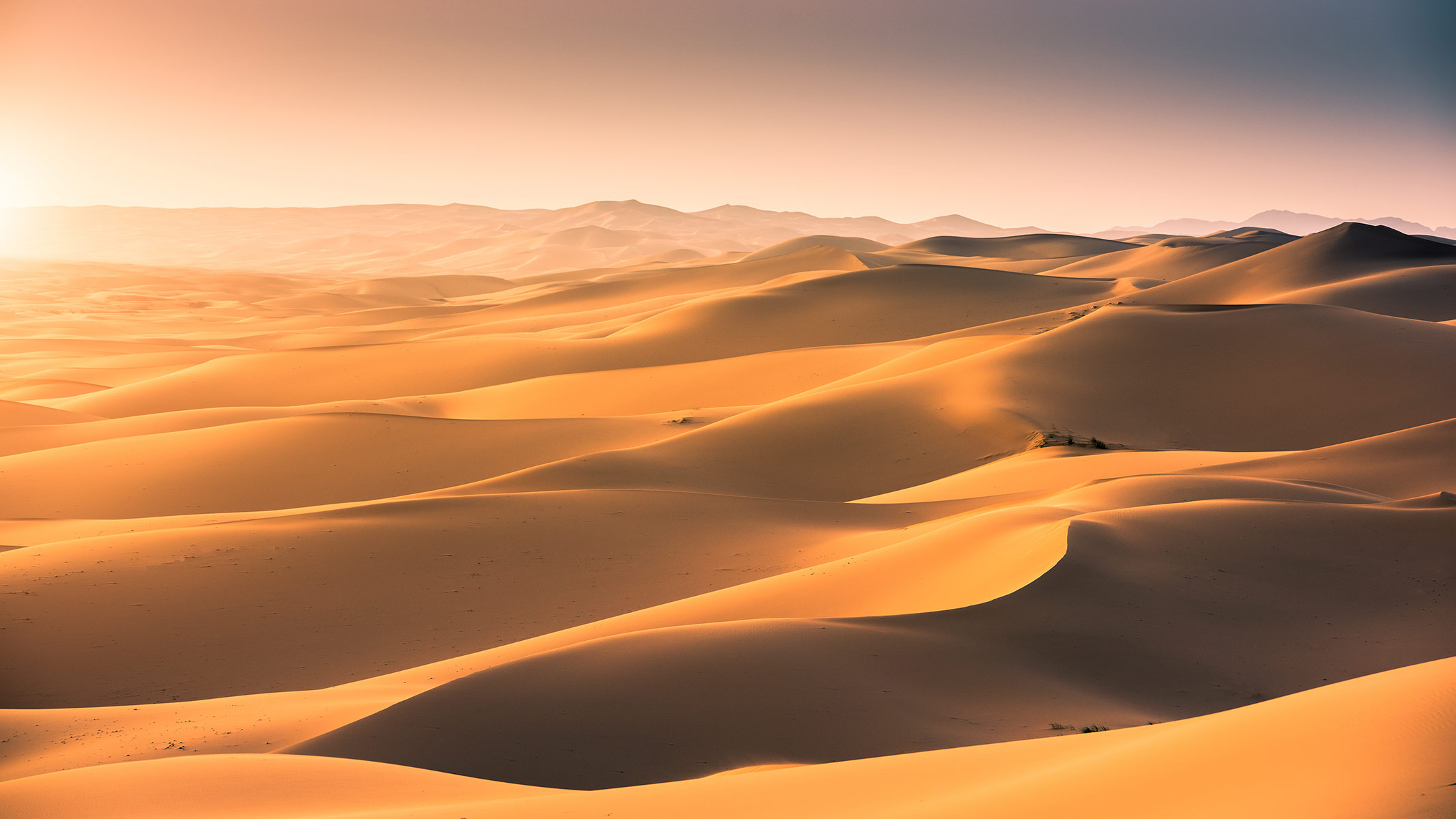 Usually, the first images that spring to mind when at the mention of endangered ursine species are either of the formidable polar bear traversing the Arctic regions or the endearing panda clumsily munching on bamboo. With just around 40 remaining in the world, the Gobi bear is, in fact, rarer than these two conservation superstars but is rarely mentioned in discussions of animals at risk of extinction. Resembling a scruffy teddy bear with a shy demeanor and a penchant for wild rhubarb and onion, can the Gobi bear capture our hearts and garner the attention needed to ensure its survival?

In scientific nomenclature, the Gobi bear is a subspecies of the brown bear known as Ursus arctos gobiensis that inhabits the rough, rocky terrain of its namesake desert in Mongolia. The mazaalai, as it is known in Mongolian, is unique, being more diminutive than its grizzly cousins, with an average weight of 90-100 kilograms. Its claws are another distinguishing feature, blunted from crisscrossing its desert homeland as well as scratching at plant roots as opposed to the sharp nails other bear species use to slice open their prey.

Living in the Great Gobi Strictly Protected Area Zone A means that the bears have adapted to a mountainous environment, which affects their ranges. While a typical forest bear wanders an average of 12-15 square kilometers in search of food, the mazaalai requires a habitat of 650-1,200 square kilometers. On top of this, weather in the Central Asian steppes is harsh. Bears must endure a temperature range from +46°C in the summer and -40°Cduring their winter hibernation period.

The Wild Bactrian Camel: An Animal Hero for Our Time?

Indeed, hibernation is a difficult endeavor for the Gobi bear. The mazaalai is already a lean species due to environmental conditions and diet, meaning that the hyperphagia exhibited in late summer and autumn is especially important for the accumulation of the caloric intake needed to sustain life and to birth cubs over the winter. Gobi bears consume mostly a plant-based diet, including the rhizomes of wild rhubarb, berries, grass shoots, wild onion and the odd number of lizards, insects and small rodents. Bears must find mountain caves to hibernate from November to early spring.

An important point that differentiates the mazaalai from other bears, especially fellow endangered species, is that none are kept in captivity. As a result, controlled scientific knowledge about the genus and specialized breeding programs to ensure population increases are lacking. The few bears in the wild in the Great Gobi are the only representatives of their species left for ursinologists and conservationists to study.

Those involved in conservation projects focused on the mazaalai, such as Gobi Bear Project and Save the Gobi Bear Foundation, hope that the situation can be turned around for the rarest bear in the world. Mongolia has taken action within its limited state budget to help the creatures, such as marking 2013 as the “Year of the Gobi Bear” and creating feeding sites. Young scholars at the National University of Mongolia even named the country’s first satellite after the bear.

The mazaalai is listed as an Appendix I species — critically threatened with extinction — by the Convention on International Trade in Endangered Species. The World Wildlife Fund for Nature even included the bears on its Great Gobi 6 Initiative to pivot international attention to the plight of threatened species in the Central Asian desert.

Numerous factors contribute to the Gobi bear’s critical position. First and foremost, climate change is negatively affecting outcomes for any real population growth. As temperatures rise, the hunt for limited water resources becomes even more competitive, especially around the oases in the bear’s habitat.

Local farmers take their herds to the same watering spots that are expected to become even less abundant over time. Bears travel long distances to drink. Their shy character and human intervention, such as the firing of shots to scare off or fatally injure the animals, compel them to seek out other sources, risking fatal dehydration.

The Gobi Desert has always been a fragile ecosystem, and ever-greater human interaction with the land is making existence more difficult for its native species. Many families rely on the desert environment to feed their livestock, and overgrazing has become a serious problem. Sheep, goats and cattle consume vegetation that the mazaalai relies on for nutrition. Conflict over limited resources places bears vis-à-vis humans, with the former a likely loser.

Mining is yet another threat impacting the Gobi bear. Mongolia is rich in coal, copper and gold, which means that the extractive industry benefits the national economy and will continue to do so as the state expands its engagement with international markets. However, large-scale mining impacts wildlife habitats, and this fact should be at the forefront of all policy decisions when corporations lobby Mongolian leadership for access to deposits in the Great Gobi Protective Area.

Illegal mining is also a significant problem. The presence of unauthorized mining activity in the area is another avenue for competition over limited water resources between bears and humans. As in their interaction with farmers, the mazaalai are often shooed away or fired at by miners.

Saving the mazaalai is a challenging venture that can be achieved through appropriate resources, partnerships and leadership. The issue needs to be tackled on the technical level by ursinologists and scientific researchers, by conservation organizations and civil society organizations more broadly, as well as on the political level by the Mongolian authorities. A strategy that combines international influence, as well as domestic Mongolian expertise, will undoubtedly benefit the survival of the Gobi bear.

Mongolia has demonstrated the political will to aid the mazaalai. However, Ulaanbaatar struggles to allocate adequate funds for bear conservation because infrastructure and social spending are more pressing issues in the state budget. As a consequence, feeding programs are highly reliant on fluctuating domestic funding and the availability of foodstuffs suitable for the bears. It is also a matter of balance. Conservationists don’t want the animals to become reliant on the feeding stations as that will weaken their survival skills and ability to source a natural diet. The old adage, “a fed bear is a dead bear,” has a deeper meaning in this context.

In the same vein, the Great Gobi Protection Area requires better physical security of its peripheries. Those who infringe on the territory to engage in practices such as illegal mining are becoming more ingenious, and the only solution is to better securitize the conservation area. Rangers require equipment that allows them to better patrol the vast territory and accrue evidence of illicit activities that can be shared with the appropriate legal authorities. This is a matter that needs to be addressed politically. A steadfast policy that keeps out invasive industries should be at the forefront of decision-making, with the interests of the mazaalai and other Gobi species at its core.

Greater attention from international research specialists is a key component for the survival of the Gobi bear. Scientific knowledge is lacking about the species, and it is imperative that those with specialist skills in ursine or large mammal conservation shift some of their attention to the Mongolian steppe. For instance, approximately 20 bears have GPS tracking collars on them, and they have provided valuable data on their behavior and movements.

Curious minds could bring supplementary knowledge and funding that would benefit the research on this rare species. An international coalition of respected voices calling for the preservation of the species and dedicated to understanding it better would have consequential benefits for the mazaalai.

Civil society organizations in Mongolia and beyond have a vital role to play by cooperating with the locals to create a better understanding for their ursine neighbors and foster coexistence in a time of resource competition. Encouraging positive relationships with the people who share the habitat with the endangered species is beneficial to scientific observation as well. As villagers encounter Gobi bears or traverse their territory, they can share their first-hand knowledge about sightings and any other important data points. Funding can go a long way in education and training initiatives.

International organizations stimulate an even broader global awareness — which is what the Mongolian authorities attempted to achieve with the “Year of the Gobi Bear” and repeatedly state is a requirement for a successful conservation campaign. A wider audience means that the plight of the mazaalai can receive additional support through crowdfunding for organizations that need it, attract innovative solutions to subsistence problems, and inspire scholars to pursue relevant research. Awareness is the first step to any positive outcomes.

The Gobi bear does not have the luxury of panda diplomacy. However, a recent upturn in interest in Mongolian culture, such as heavy metal and esoteric folk music, the ancient sport of “knucklebone” or the traditional nomadic homes — the yurt, or ger in Mongolian — could serve as a conduit for greater awareness about the country’s endangered flora and fauna.

The image of a shaggy desert bear wandering the Gobi is enough to invoke a romanticized notion of the Central Asian steppe and its exceptional creatures. But this remoteness and the few remaining individuals have resulted in an out-of-sight, out-of-mind attitude to the Gobi bear in the global consciousness. There is room for another bear to share the conservation pantheon. A collective focus on this critically endangered species may not increase its fragile numbers in the short term, but a robust strategy involving multiple local and international stakeholders can ensure it has a future on this planet.

*[The Gobi bear is indeed so rare that we were unable to license any photos of it. We apologize. Please search the internet to confirm cuteness.]