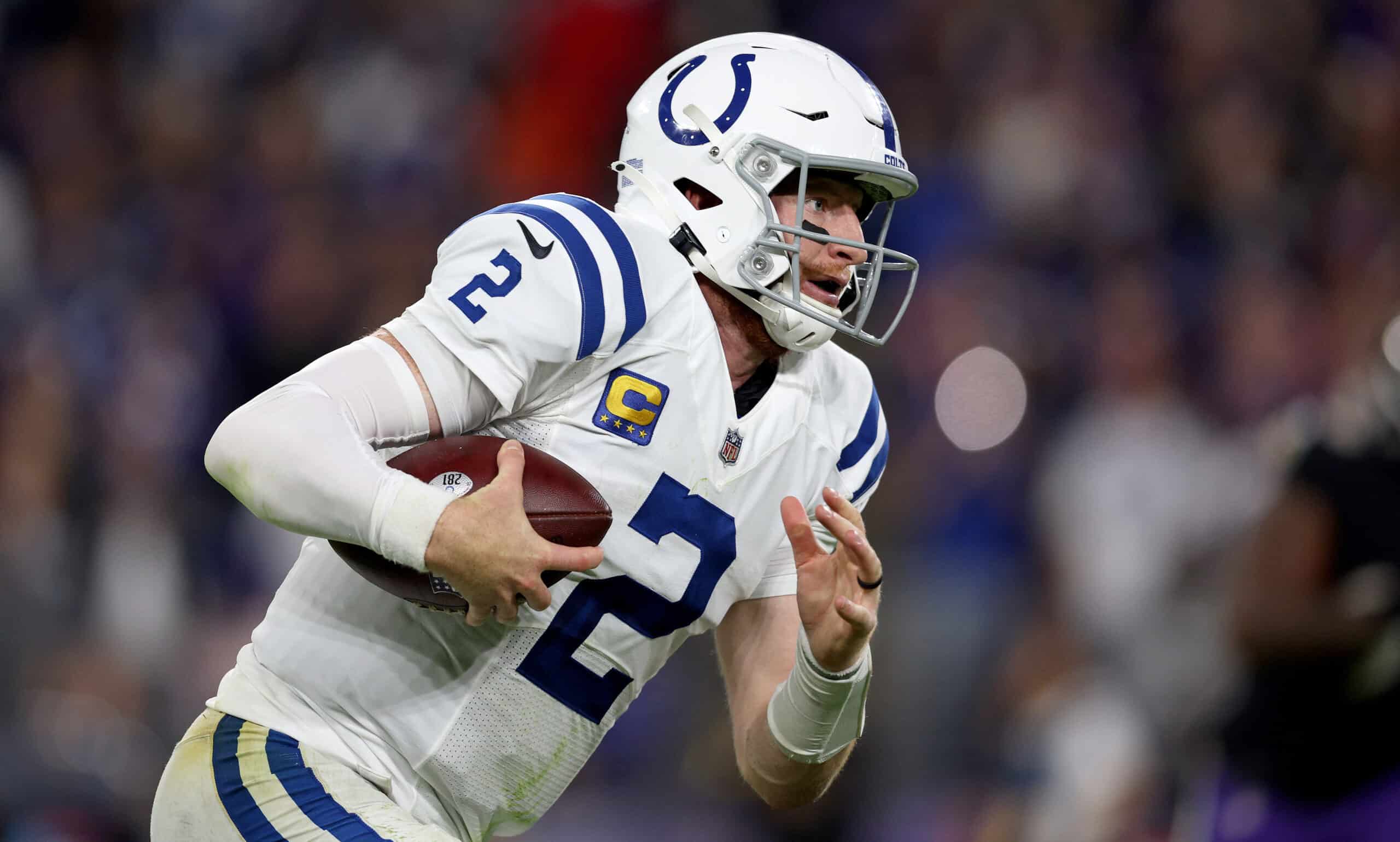 The Indianapolis Colts did not give up on quarterback Carson Wentz even if he did not look good during his final year with Philadelphia.

They thought that he could fill the void that the retired Philip Rivers left.

It looks like the reunion with coach Frank Reich is going well for the former North Dakota State standout.

Wentz proved against the Baltimore Ravens that he is not a liability anymore.

He went toe-to-toe with Lamar Jackson even if he’s not as shifty as the former league MVP.

Carson Wentz is the 4th player in Colts history to throw for 400 passing yards in a game, joining Peyton Manning, Andrew Luck and Johnny Unitas. pic.twitter.com/8Cuqdb9lUR

The six-year veteran finished with 402 passing yards and two touchdowns to earn a passer rating of 128.5.

Unfortunately, the Colts lost by blowing a 19-point lead, and Jackson threw for 442 yards.

However, the fans can’t pin the blame on this defeat at Wentz.

Instead, he showed the form and composure that made him one of the NFL’s most promising quarterbacks.

Steep Fall From Grace In Philadelphia

Wentz’s career started on a high note when he threw for 3,782 yards and 16 touchdowns in his rookie season.

However, after a season-ending injury, Nick Foles took over and led the team to a Super Bowl victory.

While Wentz helped pave the way for the championship run, Foles took the more prominent credit by leading Philadelphia to the promised land.

Carson Wentz isn’t an Eagle anymore. So why are @Eagles fans still talking about him? Let him go. Like, thank him for the time he spent in Philadelphia, but it’s time to move on.

Wentz became a Pro Bowler and a Second-team All-Pro by the end of the title season.

Sadly, his career became an up-and-down journey since that injury.

He won only five of the 11 games he started in 2018 and did not participate in the playoffs.

As a Philadelphia Eagles fan, I’m required to be a Carson Wentz hater after his performance last season

Just giving credit where credit’s due

But in a weird twist of fate, it looked like Wentz forgot how to play football in 2020.

He looked tentative with his throws, and the confidence to make plays wasn’t there.

His campaign was so erratic that he had 16 touchdowns and 15 interceptions.

He was not injured, but he played confused and scared.

Could it be that he placed much pressure on himself when the Eagles drafted Jalen Hurts in the second round of the 2020 draft?

Let’s give props to the Philadelphia Eagles front office. They had to move from Carson Wentz and now are going with 2nd year Jalen Hurts.

Jalen Hurts isn’t a franchise quarterback but he will do just fine for the development of this franchise.

Plus they have 3 1st next draft

Head coach Doug Pederson had to pull the plug on the Wentz era after 12 games.

Hurts took over, and the Eagles finished the season at 4-11-1.

Philadelphia traded Wentz to the Colts for a third-round pick in 2021 and a conditional second-rounder in 2022.

The Eagles traded the third-rounder for the Dallas Cowboys’ No. 10 overall selection, which they used to draft Alabama wide receiver, DeVonta Smith.

All Is Not Lost For Indianapolis

Wentz is starting to look like the leader that the Colts envisioned him to be.

After the loss, he even gathered his teammates in the locker room to express that they must have a killer instinct moving forward.

Matt Eberflus must make many adjustments on the Indianapolis defense, which allowed Baltimore to come back.

The Colts can make a push in the next five weeks because they will be going up against teams with losing records.

Only QBs with 0 turnover-worthy passes this season:

However, they might bring in another kicker because Rodrigo Blankenship is dealing with a hip injury.

The Colts had a rough start to the season at 1-4, but they can start winning if they all embrace the mentality Wentz manifested in Week 5.