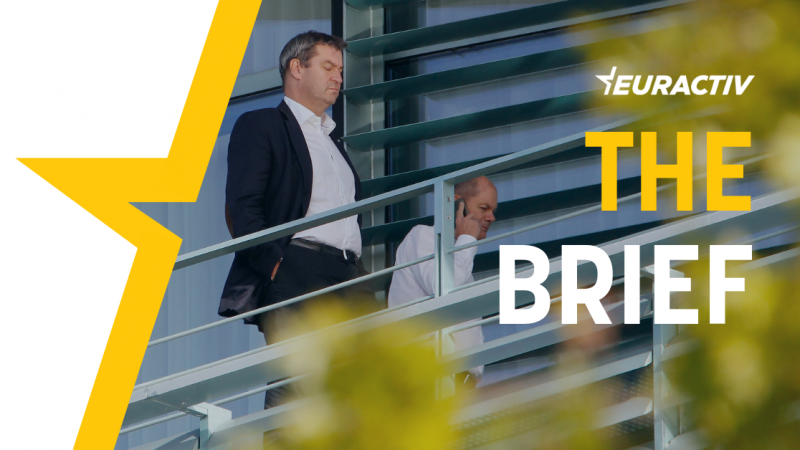 On 27 September, the German social democrat SPD gave bouquets of flowers to the party’s election-winning candidates: Olaf Scholz for winning across Germany, Franziska Giffey for winning Berlin, and Manuela Schwesig for winning Mecklenburg-Vorpommern.

The party also thanked its volunteer supporters. In all these laudations, one special helper would have warranted a mention by name: the conservative Bavarian minister-president Markus Söder.

Those of us reporting on the German campaign trail from Berlin were often stunned at the insidiousness with which Söder repeatedly damaged the conservative CDU/CSU union’s prospects, causing many to ascribe at least part of the blame for the conservatives’ loss to him.

After Armin Laschet won the top position within the CDU in early 2021, the party was polling comfortably above 30%. Following Söder’s failed bid to become the conservatives’ chancellor candidate, the party dropped below 25%, after which he promptly pulled out of the race, leaving a bruised Laschet to pick up the pieces.

The precedent was set, and in the coming months, interference from Munich was a regular occurrence.

As the EPP met in Berlin to strengthen a floundering Laschet, CSU secretary general Markus Blume loudly proclaimed “of course, we would be in a better position with Markus Söder”.

Following the conservatives’ defeat at the ballot, Söder torpedoed the party’s one last hope of forming a government, leading a coalition from second place, as had happened twice in German history already, alongside the liberal FDP and the Greens.

Söder made sure that would not happen by telling anyone who would listen that the conservatives had no mandate to be in government. “Without the CSU’s constant sliding tackles against Armin Laschet, we could start exploratory talks tomorrow,” the FDP’s domestic policy spokesman put it.

And that was the nail in the coffin of Laschet’s political career, as the CDU then opted to dismantle its leadership team.

The question that remains is whether this behaviour by the Bavarians will have consequences? Some signs are already there, like MEP Dennis Radtke noting that the CSU and Söder bore responsibility for the “current war in heaven.”

The other question on people’s minds is why. What motivated Söder to actively work against his party’s chances at the ballot?

The first explanation that comes to mind is petty revenge. Was it not the CSU’s very own Manfred Weber who was dropped like a hot potato by the CDU’s Angela Merkel in the face of the slightest opposition, ending his hopes of becoming European Commission President as the ‘Spitzenkandidat’ of the largest party?

Another explanation is that Söder simply miscalculated in his bid to be chancellor candidate and then sought to make the best of the drop in the polls, providing the bare minimum of support to Laschet.

Finally, the most devious explanation: Söder knew exactly what his actions would result in, and they were calculated to ensure the conservatives would be forced into the opposition.

As he is soon facing elections in Bavaria in 2023, he could portray his party as the guardian of Bavarian interests in Berlin and try to win the election that way. And if he were to win convincingly, he would create a strong basis for a push to be the conservative chancellor candidate in 2025.

Either way, it is safe to assume that Söder is not the most popular person at the Konrad Adenauer House at the moment.

A message from APPLiA: Circular economy is a whole principle and recycling is an important step of it.

When it comes to discarding your old or broken appliances, it is important to know all the options available. This and much more in APPLiA’s short series of animations.

Sell–out, betrayal, sacrifice. These are common sentiments in Northern Ireland as issues with Brexit and the Northern Ireland protocol continue to arise. Many Northern Irish people feel at the mercy of the EU and Britain, while simultaneously feeling that their ‘Britishness’ has been stripped.

European lawmakers have criticised the European Commission’s decision to sit on the controversial study on the impacts of the Farm to Fork for half a year, calling it a “sneaky” move designed to conceal its contents. Documents seen by EURACTIV last week revealed that the report, which was not released until mid-August, was actually ready for publication in January.

As the natural gas crisis drags on, EU leaders have committed to “secure sufficient supply” of natural gas to Ukraine through the winter. Ukrainian leaders claim Moscow is attempting to use gas supplies as a weapon against Europe.

Against the backdrop of the crisis, EU environment ministers have widely criticised the Commission’s plan to introduce a separate carbon market for road transport and the building sector. “We are already observing a very worrying situation regarding rising energy prices and the Commission’s proposals may significantly worsen the situation,” said the Polish environment minister.

Instead, “nuclear power must be part of the solution” to the climate crisis and the rise in energy prices, according to a group of 10 EU countries led by France and Poland who signed a joint opinion article published across major European newspapers on Monday. The Commission is widely expected to propose nuclear power as a “green” or “transition” technology under its new sustainable finance taxonomy.

EU leaders are also looking into the possible benefits of EU countries jointly buying natural gas to form a strategic (and voluntary) reserve. The Commission’s energy “toolbox,” which will provide member states with solutions to tackle the gas crisis, will be released this week.

Plus, two dozen countries announced their commitment to the EU-US global methane pledge on Monday, just weeks ahead of the COP 26 summit in Glasgow. “If you don’t deal with [the climate crisis] in the next decade, it will be too late,” Japan’s climate representative said.

In other news: The Commission has launched an expert group on disinformation and digital literacy to develop common guidelines for educators when it comes to combating the former and training citizens in the latter. The initiative is part of the Commission’s Digital Education Action Plan, which began this year and seeks to address the twin challenges of transitioning into the digital age and post-pandemic world.

And Europol is on track to gain a stronger, broader mandate, legitimising data processing practices that spurred controversy last year. “Digital is the new reality. The Europol mandate had to be updated to face these challenges that threaten the security of the Europeans,” said a leading MEP.

A majority of EU countries have rejected the commitment to a tight timeline for an agreement on two key pieces of digital legislation ahead of the French general elections and EU presidency. France was backed by the current Slovenian EU presidency, Spain and Portugal, but opposing member states the timeline was too strict and not very realistic.