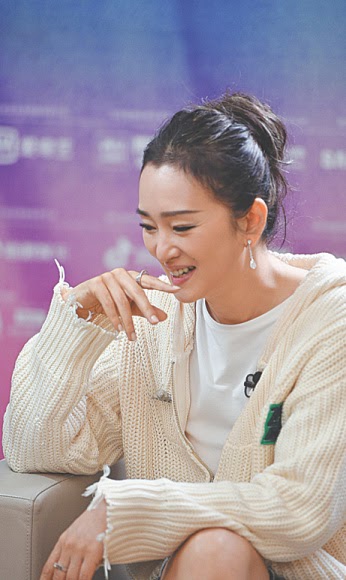 In the winter of 2002, Zhang Songwen, who is now an award-winning actor known for the smash hit The Bad Kids, stumbled upon a tale about Gong Li, an internationally recognized Chinese film star.
Then working as a teaching assistant at the Beijing Film Academy, Zhang had rented an apartment from another actor, Liu Peiqi, who told Zhang he could also use his cotton-padded jackets to keep warm in the chilly weather of the city. A native of South China’s Guangdong province, Zhang felt quite cold one day and opened Liu’s closet and saw a red-cover notebook, with the writing, “Work log from the shooting of The Story of Qiu Ju”.
In 1992, the film, starring Gong as a rural pregnant woman who stubbornly seeks justice, won the Golden Lion, the top award at the Venice International Film Festival, and also earned her the best actress award. The film was helmed by China’s top director Zhang Yimou, with Liu playing a major character in it.
A decade after the glorious moment for Chinese cinema, The Story of Qiu Ju had become a must-watch for film enthusiasts in the country, and Zhang Songwen’s hands trembled as he started to read the notebook.
After squatting on the ground and reading the notebook for three hours, Zhang Songwen says he was most impressed by the part that mentions the arrangements made for the cast and crew members to experience rural life and study a local dialect in northern China. Liu took a train ride to a small city and was received at the railway station by a group of people, including Gong, but Liu didn’t recognize her until hours later. The actress had been living in a villager’s home and doing farm work for a month, making her look like a local.
On Sept 24, Zhang Songwen told the story during a master class, a high-profile event at the 11th Beijing International Film Festival. Gong serves as the jury president for the festival’s Tiantan Award. The master class was hosted by Gong and also featured actors Zhang Songwen and Mark Chao, and director Lou Ye, all major creators of her latest film, Saturday Fiction, an espionage thriller that was the closing movie of the festival.
During an interview before the master class, Gong told China Daily, since The Story of Qiu Ju, it has become a habit for her to leave two or three months ahead of filming to prepare for her roles.
“Every character is special for me. So I learn special techniques to play them or try to get used to their living environments,” she says.
Gong recalls practicing holding and waving paper fans every day for months to prepare for a short scene in the Oscar-winning Memoirs of a Geisha (2005).
Gong made her acting debut in 1987 with Red Sorghum. The film, also directed by Zhang Yimou, won the Golden Bear at the Berlin film festival. Gong then acted in Farewell My Concubine, helmed by another well-known Chinese director, Chen Kaige, in 1993. It won the Palme d’Or at that year’s Cannes Film Festival.
Gong has maintained a record of being the only Chinese actress whose movies have garnered top awards at Europe’s most prestigious festivals.
When shooting her latest film, Saturday Fiction, Gong, whose character leads double lives as both an actress and a spy, trained to swiftly load a firearm in darkness, repeating the process many times until the skill “almost turned into a physical instinct”.
“The fan-waving scene in Memoirs of a Geisha lasts for just a few seconds. The gun-loading scene was cut from the final version of Saturday Fiction. But it’s fine. I can understand the directors’ decisions,” says Gong, adding that intensive training can help an actress to “become” her characters by possessing techniques or skills.
Gong shadowed Lang Ping, the former head coach of the national women’s volleyball team, for two weeks to observe and learn how she talked and gave instructions, as an effort to realistically portray the legendary figure in director Peter Chan’s sports blockbuster, Leap (2020).
“I got only around 15 days with Lang. Despite the short time, I tried hard to tell myself that I ‘were’ the coach when the cameras started rolling. A solid faith is also important for an actor,” Gong adds.
During this year’s Beijing film festival, Gong spent around eight hours every day watching and discussing all 15 nominated films with six other members of the award’s jury, including Finnish director Renny Harlin and Lebanese filmmaker Nadine Labaki, who participated in the festival online.
“For all of us, a film festival is like a harbor, where you can dock for a break to examine or showcase your latest work after working hard for a long time,” Gong says.
While asked to predict the future of China’s film industry, Gong says the country’s rich culture is a treasure trove of inspiration for storytellers.
Noting the impact the pandemic has had on the industry-and her own workload-over the past two years, Gong’s philosophy is a pragmatic one.
“The pandemic will finally end. Don’t be stressed or extra concerned. Just concentrate on your work and you will get what you are really pursuing.”
Source: By Xu Fan | China Daily | Updated: 2021-10-12 07:59