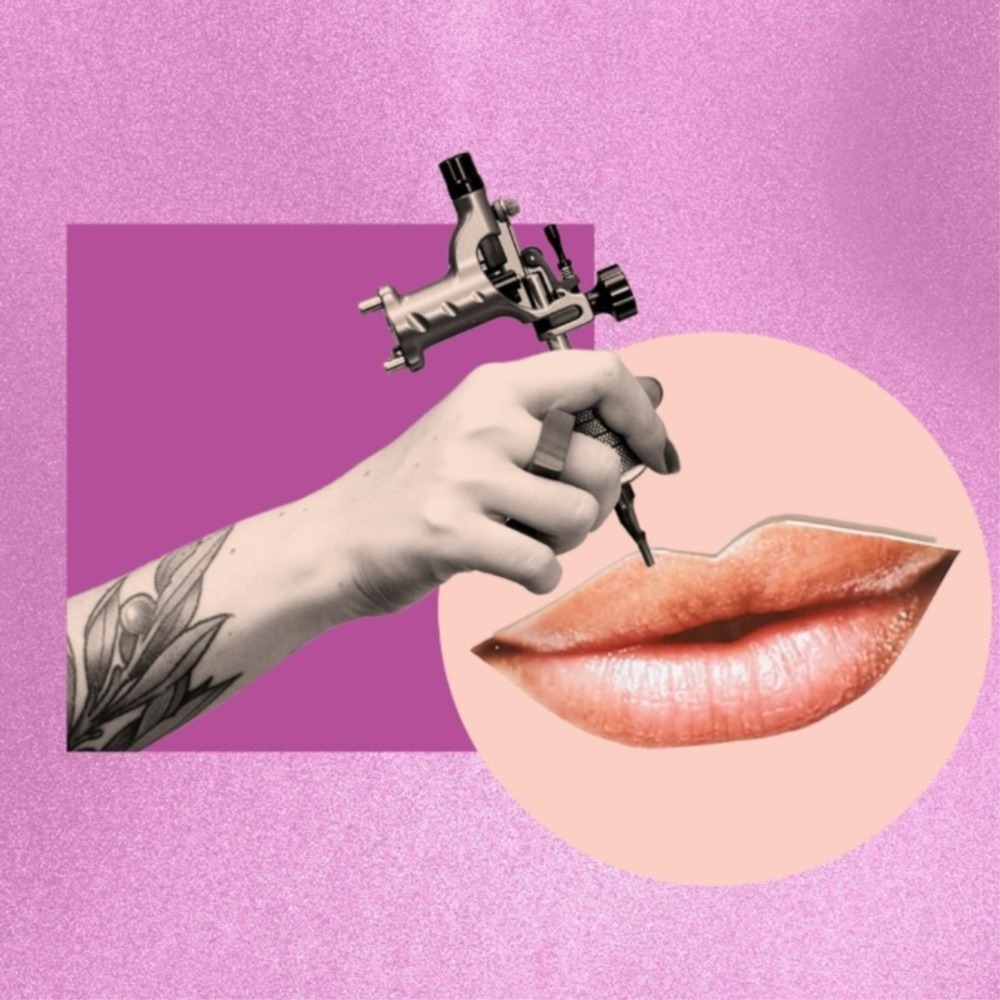 While semi-permanent cosmetic tattoos can produce natural-looking results, their appeal is blatantly obvious. If you’re someone who wears makeup on the reg, the treatments have the potential to give you hours back that you might spend applying products or making trips to the drugstore or Sephora.

You’re probably familiar with microblading for eyebrows, but what about lip blushing? As the name suggests, the process can impart a semi-permanent wash of colour to your lips that can stand up to all the talking, eating, and kissing you wish to partake in.

Intrigued? Here’s everything you should know about lip blush tattoo treatments.

What is lip blushing?

“Lip blushing is a semi-permanent tattoo, meaning it only lasts up to a year and a half,” says Luljeta Nikqi, a cosmetic tattoo artist and esthetician based in New York.

It’s different from the lip tattooing technique that peaked in the ’90s. “The [lip blushing] approach is much softer,” says Paula Ocot-Pereira, a cosmetic tattoo artist who provides lip blushing at Evolve Med Spa in Montclair, New Jersey. “There are no harsh edges to it. In the past, you would usually have a really hard [line mimicking lip liner] or the colour would be very solid, which results in a very lipstick-y type of look. This is actually the opposite of that — it’s going to create a very soft, sheer wash of colour.” A tattoo artist can use the technique to create the slightest hit of colour, or they can build on it if you’re going for something more noticeable, says Ocot-Pereira. Lip blushing uses a different method from those lip tattoos of the ’90s. “It’s not fully shaded in like a tattoo is; it’s pixelated,” explains Nikqi. Essentially, experts call upon tools that create pixels or indiscernible dots that prevent the pigments from looking harsh on your lips.

Lip blushing can not only temporarily change the colour of your lips, but it can also add definition to the borders in the process. “[Lip blushing] does make your lips look slightly larger because most people’s natural lip colour gets lighter toward the edges,” says Nikqi. In the case of a client with scarring on their lips that left them without a defined cupid’s bow, she was able to use the tattooing to build this upper part of the lip, she says. Other clients have requested to make a pointy cupid’s bow more rounded or vice versa, she adds.

What should you expect from a lip blushing appointment?

Before an appointment, your tattoo artist should speak with you about what colour you’re trying to achieve. “I tell a lot of my clients, to bring an everyday lipstick that they wear,” says Nikqi. “And I normally try to match my colour to the lipstick that they bring me.”

Your tattoo artist should also take the undertones of your skin into account in order to explain what is and isn’t achievable through lip tattooing during your consultation. For example, “there are times when people come in and their lips have a very brown undertone or maybe a very purple-y undertone,” says Ocot-Pereira. “So, in that case, if somebody said, ‘Hey, I want a red lipstick,‘ or like, ‘I want a red colour,’ that wouldn’t really be optimal because if your undertone is blue and then you’re putting a red over it, it would heal to look like a purple.”

Once a shade and shape are determined and agreed upon, your tattoo artist will first apply a numbing cream (which may cause some mild discomfort) and draw an outline along the natural line of your lips with a lip pencil. Then, they’ll start “using a tattoo machine and a very fine needle, to implant pigment into the lips,” according to Ocot-Pereira. On average, treatments tend to take around an and a half, according to HelloGiggles. And while some folks are completely satisfied with their results from a single appointment, many people opt for touch-up treatments five weeks after their initial treatment, says Nikqi.

“During a second session we can perfect any areas that might be a little bit lighter,” says Ocot-Pereira. “If a client wants to, let’s say, go a little bit bolder with the colour, the second session is where we really tie everything in and perfect it.”

What does the lip blushing healing process entail?

As with any tattoo, there’s a healing process to be expected after lip blushing. “You do get quite swollen the day of, so I try to warn everybody ‘make sure you have no plans after,’” says Nikqi, who adds that your lips will likely feel tight and dehydrated following the treatment, too. “You’re just going to have to keep moisturising them.” And the same is true during the next phase of the lip blush healing process, which, unfortunately, involves some shedding.

“With any type of implantation of pigment into the skin, there’s always going to be a turnover time where all of the superficial skin that you’ve opened is going to scab and come off,” says Ocot-Pereira. You can keep your skin moisturised with a lip balm, but this stage is inevitable and lasts about one week, according to Nikqi.

It’s not until about 30 to 45 days in that you can admire your final results, says Ocot-Pereira. “Once all the scabs come off, there’s like this waxy coat that covers the lips [that] makes [the colour] look very faded,” she says. “After about a month or so, that layer that I tattooed comes to the surface, and that’s when your colour blossoms.”

What else should you know before trying lip blushing?

FYI, this treatment has the potential to trigger cold sores. “If you have a history of cold sores, even only once, it’s strongly recommended that you get an antiviral prescription from your primary doctor, such as Valtrex, and take it three days before and three days after,” says Ocot-Pereira. “When you are tattooing lips that are prone to cold sores, you can make any cold sores that are dormant come to life. Taking an antiviral definitely helps minimise that.” Tattooing injures the skin, compromising skin barrier function, which can lead a dormant virus to become an infection.

And lip blushing isn’t exactly cheap. The typical cost for a lip blushing tattoo varies by location, but in a city such as New York City, you can expect to pay around $1,000 (THB 33,874) for the initial treatment and around $500 (THB 16,937) for any touch-ups, says Nikqi.

But don’t just go searching the web for the lowest possible price (you know the saying — you get what you pay for). Instead, focus on a cosmetic tattoo artist’s lip blushing before and after photos. “Make sure that the healed work looks really good and that they have a variety of different lip tones that they’re working on,” says Ocot-Pereira. “Somebody might only, let’s say, be experienced doing one type of lip tone, which [isn’t your own].” It’s worth a little digging since the results aren’t reversible, albeit they are temporary. “The results tend to look natural, but if somebody absolutely hates it, they would just have to wait for it to fade,” says Ocot-Pereira. (Reminder: It lasts up to a year and a half.) “There’s not really any technology to remove pigment from the lips because the skin is very vascular,” she explains.

If you find a cosmetic tattoo artist who’s skilled at lip blushing, you can look forward to months of zero-effort lip colour. Even if you’ve always felt naked without stains, tinted balms, and so on, it might just motivate you to kiss lip makeup goodbye.

This story first appeared on www.shape.com

Shape and the Shape Logo are registered trademarks of Meredith Corporation. Used under License.