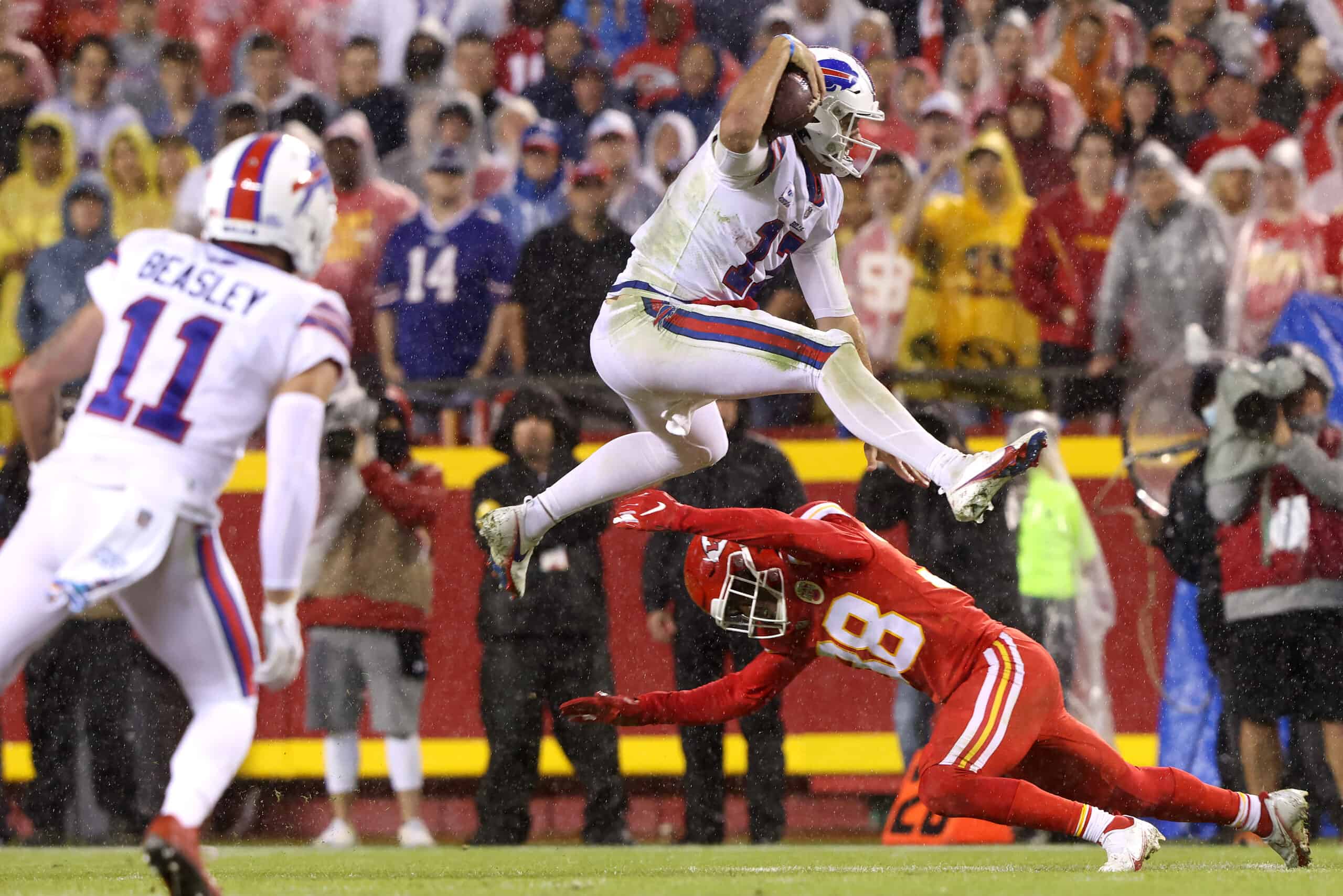 The Buffalo Bills are playing Squid Game against their opponents.

However, they are the ones making a killing on the field.

No red light can stop their dominance after that opening weekend loss to the Pittsburgh Steelers.

Their turnaround was so quick that they looked like an entirely different team.

Shutouts to the Miami Dolphins and the Houston Texans were convincing proof that they won’t mess around anymore.

But playing devil’s advocate, they should win against those teams, mainly because they have two wins out of 10 games combined.

However, they laid any remaining doubts to rest by dominating against the Kansas City Chiefs.

Perhaps the Bills circled this game on their calendar to avenge their AFC Championship Game loss last season.

They came out aggressive on both sides because the Chiefs remain dangerous as long as they have Patrick Mahomes, Tyreek Hill, and Travis Kelce.

After that game, the Bills struck fear to other NFL teams.

It looks like they have a green light to march to Super Bowl LVI.

At one point in this season, the Bills had a 56-0 scoring run through six quarters.

Much of the credit goes to their stellar offensive unit led by quarterback Josh Allen who already has 1,370 passing yards, 12 touchdowns, and only two interceptions through five games.

But having an improved run game helped the Bills sustain their onslaught.

Last season, opposing defenses found success against Buffalo by shutting down their receivers because they ran more pass plays to a fault.

The Buffalo Bills are a WAGON

Ever since they lost to the Pittsburgh Steelers they’ve been on a DEMOLISHING RUN #BillsMafia#PMSOverreactionMonday #PatMcAfeeShowLIVE pic.twitter.com/iWWo6Is5US

A year later, the Bills are the fifth-best rushing team with 140.4 yards per game.

Allen has the instinct to extend plays with his feet.

However, the emergence of Zack Moss and Devin Singletary as a potent backfield tandem fuel their success.

Zack Moss is not the dude you wanna go head to head with…..oooooweeeee😬👀 pic.twitter.com/4sQIGTSCzx

The opposition is at their mercy because they must pick their poison against Brian Daboll’s offense.

They will leave receivers like Stefon Diggs, Cole Beasley, Emmanuel Sanders, and Gabriel Davis open if they stop the run.

Consequently, opponents give Moss and Singletary free room to operate if they opt to cover the wideouts.

Yet, the Bills offense is just one-half of their winning equation because their defense does not lag anymore.

Never forget Mel Kiper tried to downplay Gregory Rousseau’s production. Was talking like he was 3-4 year project or something smh.. pic.twitter.com/fzyRIVC59L

It didn’t take long for those rookies to upgrade the Bills pass rush, which they lacked last season.

Basham already has 1.5 sacks, while Rousseau has three and an interception off Mahomes.

Play them with Micah Hyde and Tre’Davious White, and Buffalo has a defensive unit that disrupts the line, the midfield, and the secondary.

The Bills are laying all their marbles early in the season, and an injury-free run makes them invincible.

Looking at their schedule, the only time that they might lose again is on December 12 against the defending champion Tampa Bay Buccaneers.

That matchup could be a Super Bowl LVI preview, and the Bills have the personnel to put up a good fight against Tom Brady and the Buccaneers.

Beyond that monumental showdown, it’s highly realistic that Buffalo will cruise through the regular season.

The Dolphins, the New England Patriots, and the New York Jets are a mismatch, and the Bills will sweep the AFC East.

The Bills have the best two quarterbacks in the AFC East.

Meanwhile, the Tennessee Titans and the New Orleans Saints are inconsistent.

The Bills also get the Atlanta Falcons, Indianapolis Colts, and Jacksonville Jaguars on their schedule.

The Carolina Panthers can be a formidable opponent, but can they match the Bills’ offensive juggernaut?

Therefore, complacency will be the biggest enemy that the Bills will face throughout these games.

Otherwise, everyone might as well reserve a postseason slot for them as early as now.