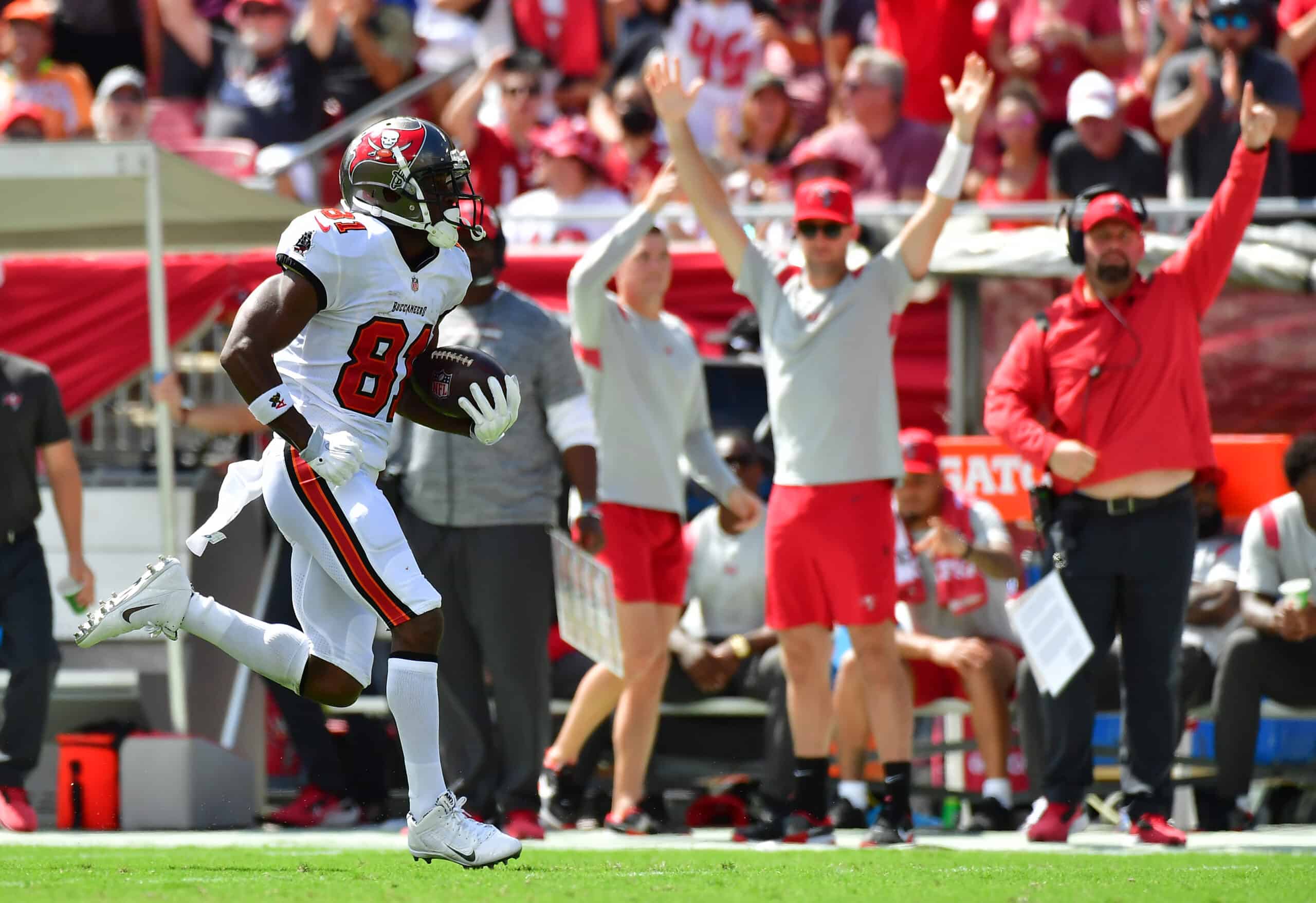 The Tampa Bay Buccaneers were firing on all cylinders on Sunday in their 45-17 victory at home over the Miami Dolphins.

While many Buccaneers had impressive statistics in the blowout win, wide receiver Antonio Brown recorded a vintage performance.

He caught a team-high seven passes for 124 yards and two touchdowns.

He took a relatively routine crossing route 62 yards for a score in the second quarter, and turned on the jets with the Dolphins secondary unable to catch up.

Brown also came up big in the red zone, getting loose in the end zone later in the period for another touchdown.

“He’s done it all. It’s such an honor. He’s such a great leader… He makes everyone better.”

Brown’s career arc has certainly been nothing short of dramatic in the past few years, but his big game on Sunday reminds fans of the player he was for so many years with the Pittsburgh Steelers.

Looking Back At His Career In Pittsburgh

There was arguably (and it was a feeble argument against him at best) no one more dangerous with his hands on the football from 2010-2018 than Brown playing in the Steel City.

He was everything anyone could have ever wanted out of a receiver—a target hog, a receptions monster, a slot savant, and a deep threat.

Not only did he check all of those boxes, he was also super durable, and did not miss many games.

Brown posted seven 1,000-plus-yard receiving seasons there, and six campaigns where he caught over 100 passes.

Every defense who played Pittsburgh knew a big Brown game was coming, and they were still largely powerless to stop it.

Unfortunately for Brown, his time with the Steelers came to an abrupt end due to wearing out his welcome down the stretch of the 2018 season.

He was traded in the subsequent offseason to the Raiders, but due to calamitous series of events, never played for the team.

He landed with the New England Patriots very briefly in 2019, and played one game for the team, ironically against the Dolphins.

Brown seemed to have an immediate connection with Tom Brady then, and the legendary quarterback was happy to have such a dynamic weapon on the roster.

However, legal troubles surfaced, and the franchise had to cut bait almost as soon as they acquired him.

After his Week 2 cameo with the Patriots in 2019, Brown had a tough time finding a team to latch on with, but Brady and the Bucs came calling midway through last season.

Moving Forward With The Bucs

It’s abundantly clear that Brown is now extremely comfortable in the Buccaneers offense, even as a third option in the receiver group which features Mike Evans and Chris Godwin.

That’s a scary thought for the rest of the league, but Brown’s production might be sustainable for the foreseeable future, as another Brady favorite, tight end Rob Gronkowski, recovers from a rib injury.

Due to the plethora of weapons the team has, Brown might not hang weekly numbers like the ones he posted on the Dolphins.

“Our business is winning.”

But don’t be surprised if he’s good for an impact play or two every week that Gronkowski is out of action.