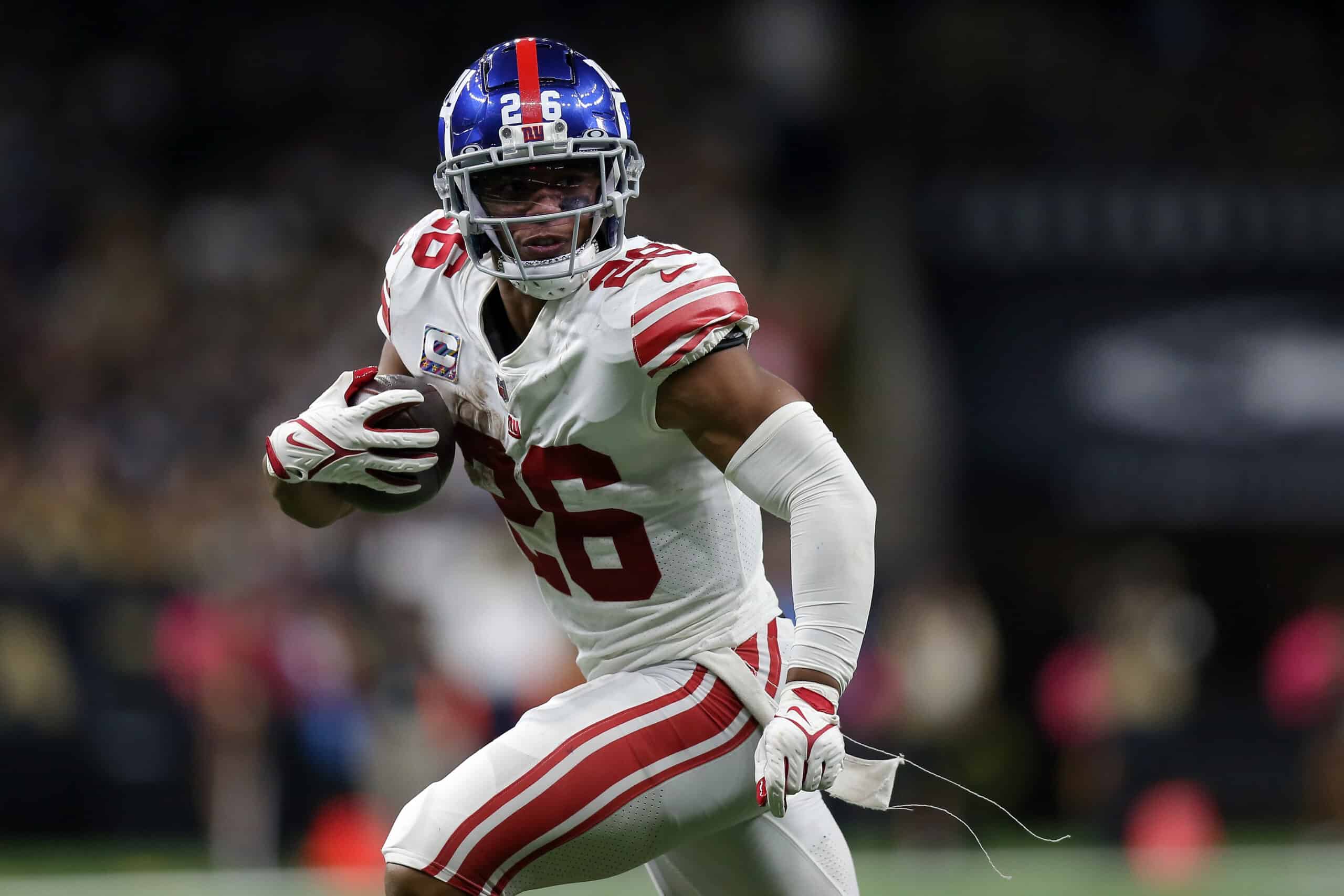 During the 2018 NFL Draft, there was little debate that the New York Giants were getting a “once in a generation” player in Saquon Barkley.

He played three seasons for the Penn State Nittany Lions and had at least 1,000 rushing yards per year.

Barkley also scored 43 touchdowns in college, 18 of which came in his final season.

#Cowboys rookie LB Micah Parsons says NYG RB Saquon Barkley recruited him to Penn State. They play Sunday. “He can really just expand the field. Look at his speed, his explosiveness. He can make guys miss.” Finished with defense must limit his explosive plays. pic.twitter.com/jlx3cYm9hG

That great campaign made him a First-Team All-American by Sporting News, Associated Press, ESPN, and the Football Writers Association of America.

Therefore, it’s a no-brainer that the Giants took him with the second overall pick.

Barkley proved that they made the right decision during his first two years.

During his rookie campaign, he rushed for 1,307 yards and 11 touchdowns.

He added four receiving touchdowns to win Offensive Rookie of the Year and gain a Pro Bowl selection.

The Saquon Barkley we all know… pic.twitter.com/T4LgM6acvk

In his sophomore year, Barkley finished with 1,441 total yards and eight touchdowns in 13 games.

He had a good start with 66 total yards versus the Pittsburgh Steelers.

But he suffered a season-ending ACL tear a week later against the Chicago Bears.

He missed 14 games, but his rehabilitation went on track to make a return in the 2021 season opener.

Keep ya head up fellas… Ya gonna see them boys again!!! 😤

However, he looks like an old Saquon Barkley, not the Barkley of old.

He opened the season with ten carries for 26 yards against the Denver Broncos.

One week later, he had 57 rushing yards versus the Washington Football Team.

Barkley finally scored a touchdown in Week 3 against the Atlanta Falcons but finished with 51 yards.

In Week 4, he had a rushing and a receiving touchdown in their win over the New Orleans Saints.

It’s uncertain whether the Giants are taking it easy with Barkley since ACL injuries can be tricky.

However, the Giants need more production from him to reach the playoffs for the first time in six seasons.

He is averaging 9.3 yards per reception but has only 130 receiving yards through four games.

However, it’s in the run game that he must regain his All-Pro form.

Barkley averaged five and 4.6 yards per carry in his first two seasons, respectively.

He also has three total touchdowns, and quarterback Daniel Jones has more rushing yards than him.

Daniel Jones and the Giants give Dak’s Boys a run, and CeeDee has the best game of his career this Sunday. pic.twitter.com/OQdxFvffR7

The Giants will face division rival Dallas Cowboys in Week 5, and they need a breakout game from Barkley.

Unfortunately, wide receivers Sterling Sheppard and Darius Slayton will not play due to hamstring injuries.

Therefore, they will need production from other players, especially Barkley.

It’s time for him to have a breakout game to reintroduce himself as one of the league’s top running backs.

Tell the coach don’t take me out, I like to finish games 🎶🎶 pic.twitter.com/8CYklpDSmg

Defeating the Cowboys won’t be easy because they have a high-powered offense.

Likewise, Ezekiel Elliott returned to form in Week 4 against the Carolina Panthers.

That performance should inspire Barkley to break out of the shell and help the Giants win at all costs.

His team needs him more than ever and he must deliver in a big way.