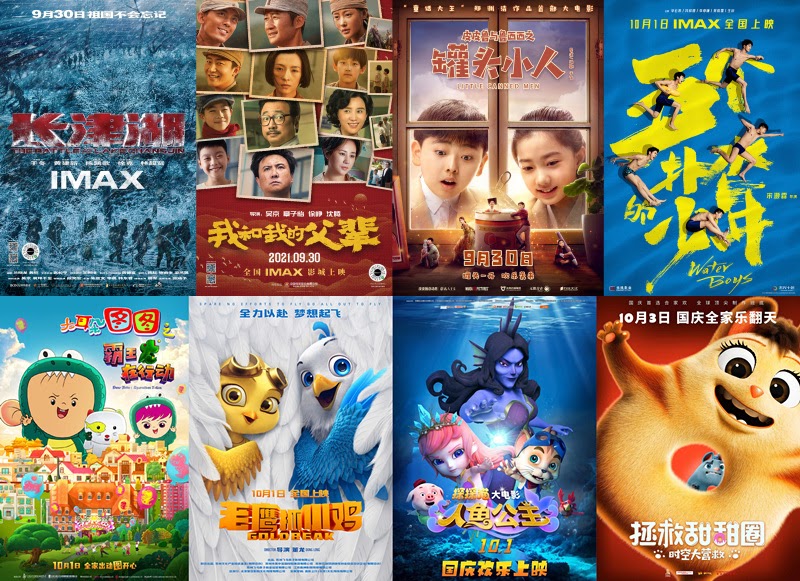 (china org) China’s box office total during the National Day holiday hit 4.39 billion yuan ($680.66 million), and was propped up by two tentpole productions while setting several records across the board, according to the box office tracking agency Beacon.

“The Battle at Lake Changjin” demonstrated unprecedented momentum at the box office, amassing 205 million yuan on the day it was released, and a further 410 million yuan the next day. Each day that followed continued to generate more money than the day before, peaking on its seventh day with 513 million yuan, only to slow down on the eighth day, also the last day of the holiday, at 395 million yuan.

The dominating performance set records not only in China but also abroad, as it became the highest-grossing film worldwide for the same period, beating highly-anticipated Hollywood productions such as “Venom: Let There Be Carnage” and the new James Bond film “No Time to Die.”

Now, industry insiders are projecting that “The Battle at Lake Changjin” could potentially become China’s highest-grossing film of all time, dethroning “Wolf Warrior 2,” a 2017 action movie that grossed 5.69 billion yuan, and that also stars and was directed by Wu Jing. What’s more, “The Battle at Lake Changjin” will reportedly get a sequel, as the three directors have already filmed enough content to produce another epic.

The other film to dominate the holiday season was the patriotic anthology “My Country, My Parents,” ranking second on the Chinese box office chart. It generated 1.06 billion yuan during the period. Actress Zhang Ziyi, comedian Shen Teng, and actors-turned-directors Wu Jing and Xu Zheng came together to direct and star in four short films, paying tribute to average Chinese families across four eras, with a star-studded cast and even a rare cameo by prominent director Zhang Yimou.

Both films have inspired a strong sense of patriotism among the Chinese public and boosted confidence in the country’s film industry. However, a number of other holiday releases didn’t perform nearly as well as experts had hoped. Yu Fei’s “Little Canned Men,” based on a popular children’s book penned by Zheng Yuanjie, came in at third and only grossed 45.36 million yuan. Meanwhile, the animated feature “Dear Tutu: The T-Rex In Operation” ranked fourth with 41.68 million yuan, making it the largest earner among several animated releases geared towards younger audiences. “Water Boys,” a comedic remake of a 2001 Japanese film, placed fifth on the box office chart and took in 37.11 million yuan.

Industry observers noted that a majority of these underperforming holiday releases are oriented towards children, and lacked high-quality productions across a more diverse range of genres. Nevertheless, this year’s National Day holiday box office total is the second-highest, only behind 2019’s total of 4.47 billion yuan during the same period.

IMAX China also announced a record-breaking holiday performance, having grossed 168 million yuan, a 30% increase over 2020’s record performance. In its more than 750 theaters nationwide, IMAX China released giant screen versions of “The Battle at Lake Changjin,” “My Country, My Parents” and “Water Boys,” and said the “remarkable results” have once again demonstrated strong consumer demand for the format’s premium experience and the power of its robust network in launching quality local language blockbusters.