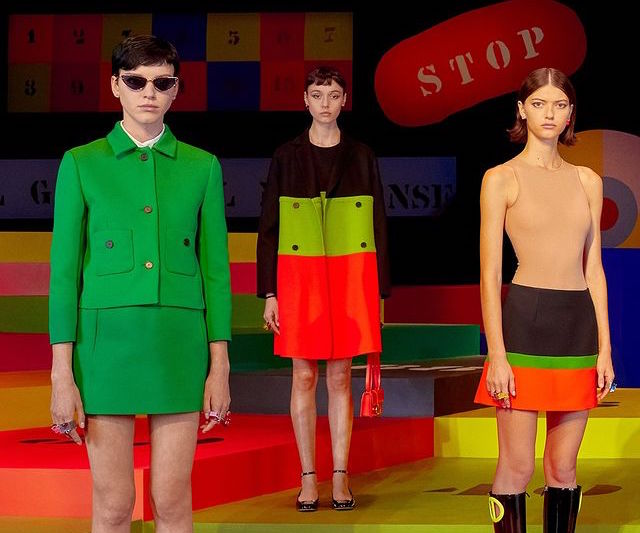 Whilst before, having your underwear shine through a translucent dress would have been seen as a major gaffe, in 2021 fashion is looking a lot more sensual.

The perfect compromise between comfort and elegance seen in New York, London and Milan, was favored by only a handful of designers in Paris, the majority preferring to return to more sensual — if not downright sexy — looks. Micro-shorts, cut-outs, transparency and visible lingerie were all over the runways at Paris Fashion Week, reflecting, it seems, a desire to (definitively) turn the page on the pandemic. Here’s a look at some of the key trends spotted in the French capital.

Marked by a return to physical shows, this fashion month seemed to be on a mission to make us forget the pandemic, with designers turning to a more optimistic, light-hearted and festive take on fashion, in total contrast — or almost — with the trying and gloomy period that engulfed the world for months. This was seen to varying degrees in the four fashion capitals, creating a strong trend that was also embraced in Paris, where color was seen everywhere in its most vibrant (and vivid) forms.

After more than a year and a half of the pandemic, does anyone still dream of a wardrobe tinged with black and gray? Next summer will be all about boldness, optimism and freedom, with a palette full of zest, energy, and life, bringing that little je-ne-sais-quoi that’s been so sorely missed in recent months. In Paris, designers were certainly on board, unveiling looks that won’t go unnoticed in spring-summer 2022. Ottolinger, Stella McCartney, Kenneth Ize and Weinsanto featured numerous looks with vibrant, pop colors in their respective collections. But it was particularly striking at Chanel, where the legendary tweed suit was paraded in pink, mauve, purple and yellow, and even more so at Dior, where Maria Grazia Chiuri presented her most colorful collection.

The art of the cut-out

Gone are the jogging pants and slippers of the various lockdowns, which made way for a new take on sensuality in Paris. Designers played the cut-out card in all kinds of ways in womenswear wardrobes, by turns understated and super sexy. At this game, Olivier Rousteing wins hands down at Balmain, mastering the art of the cut-out like no one else with a slew of pants and dresses cut at the hips, chest, waist or thighs. This was also seen at Ester Manas, in a spirit mixing sensuality and sportswear, and at Ottolinger where cut-outs were combined with lacing.

Sensuality was also expressed through pieces that play with transparency. Although this trend remained relatively marginal in other fashion capitals, it really came to the fore in Paris. Still, we’re not talking about entirely suggestive collections, but transparent pieces added here and there, like at Chanel, which placed beachwear at the heart of its new collection, but also at Valentino, Ester Manas and Acne Studios. Note that micro-shorts and micro-skirts are also making a comeback in women’s wardrobes, as well as babydoll-style dresses covered entirely with sequins. In Paris, fashion is well and truly ready to party.