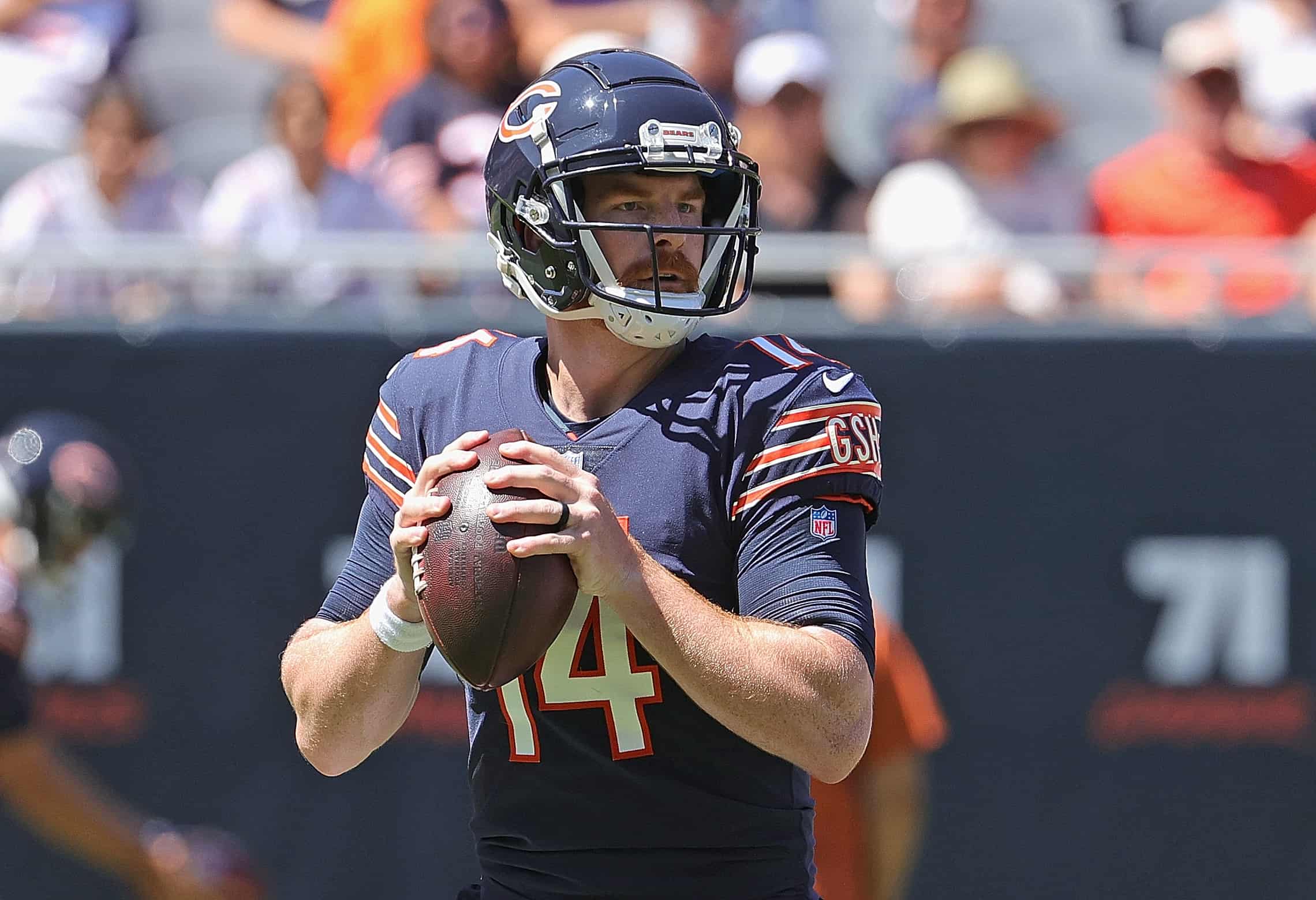 The NFL quarterback carousel has been on full display so far in the first month or so of the season.

Some of that has been due to injury.

It has made for an intriguing first four weeks, and having reliable notifications about who is starting and who isn’t has been a must for fantasy football.

The Chicago Bears have arguably been at the forefront of the quarterback shuffle in 2021, as head coach Matt Nagy has been a source of intrigue and consternation around the NFL.

Over the summer, he threw his full support behind veteran Andy Dalton, despite the franchise’s aggressive efforts to trade up for Ohio State quarterback Justin Fields in April’s draft.

True to his word, Nagy did go with Dalton in Week 1 against the Los Angeles Rams, but the red haired quarterback has battled a knee injury for the last few weeks.

Andy Dalton called Justin Fields yesterday and told him “it was a great opportunity for me and that he’d be here for it all, for everything I needed,” Fields said.

“He just didn’t want it to be awkward. He didn’t want our relationship to change because of the situation”

This has opened the door for Fields, who Nagy announced earlier in the week would be the team’s starter moving forward.

If Nagy is true to his word, that would seem to leave Dalton on the outside looking in once he gets healthy.

Let’s take a look at three teams that would be well served to call the Bears to acquire him.

More on #Bears QB Andy Dalton: The initial exams did show no ACL tear and no damage to the MCL, source said. MRI today, but the early diagnosis of bone bruise would show he dodged major injury. That would be good news considering what it looked like at first glance.

The Indianapolis Colts’ situation under center has been all over the map in the last two months.

There were thoughts that Carson Wentz would miss extended regular season time after suffering a foot injury in training camp.

This would’ve been an awful start for a quarterback looking for a fresh start, but he has actually played in all four of Indianapolis’ games.

He deserves credit for gutting it out, but considering his history, and even his present physical condition, the Colts would be wise to find some better insurance at that position than they currently have.

Heading into their Week 4 game against the Miami Dolphins, Wentz was dealing with ankle sprains (that’s plural, sprains to both ankles).

The chances of him missing a game or a few contests are better than a lot of other players, which is why they should pick up the phone and call Chicago about Dalton.

This season is basically AFC Championship Game or bust for the Tennessee Titans.

They made an aggressive move this offseason to land two time All-Pro wide receiver Julio Jones, after they’ve been knocking on the door in the AFC playoffs in each of the last two seasons.

With an influx in talent, and the experience they’ve acquired, Tennessee’s lofty goals are reasonable.

However, one semi-serious injury to starting quarterback Ryan Tannehill could change their fortunes in an instant.

His backup is Logan Woodside, who had a nice career with Toledo, but has never thrown a pass in a regular season NFL game.

For a team that has designs on playing deep into January, they should take a look at Dalton as a viable reserve in a pinch should Tannehill go down.

While the Arizona Cardinals’ goals probably aren’t as high as the Titans, they are certainly looking to make the playoffs after just barely missing out a year ago.

They’re off to a red hot 4-0 start in 2021, but keep in mind that they were sitting pretty midway through last season as well.

In 2020, they started 5-2, only to experience a late season swoon that cost them a trip to the postseason.

Kyler Murray’s production decreased down the stretch, and Chris Streveler played meaningful snaps in a do-or-die Week 17 matchup with the Rams last year.

Cardinals fans are hoping Murray can maintain his production and his health throughout the entire 2021 season, but should look to upgrade their quarterback room.