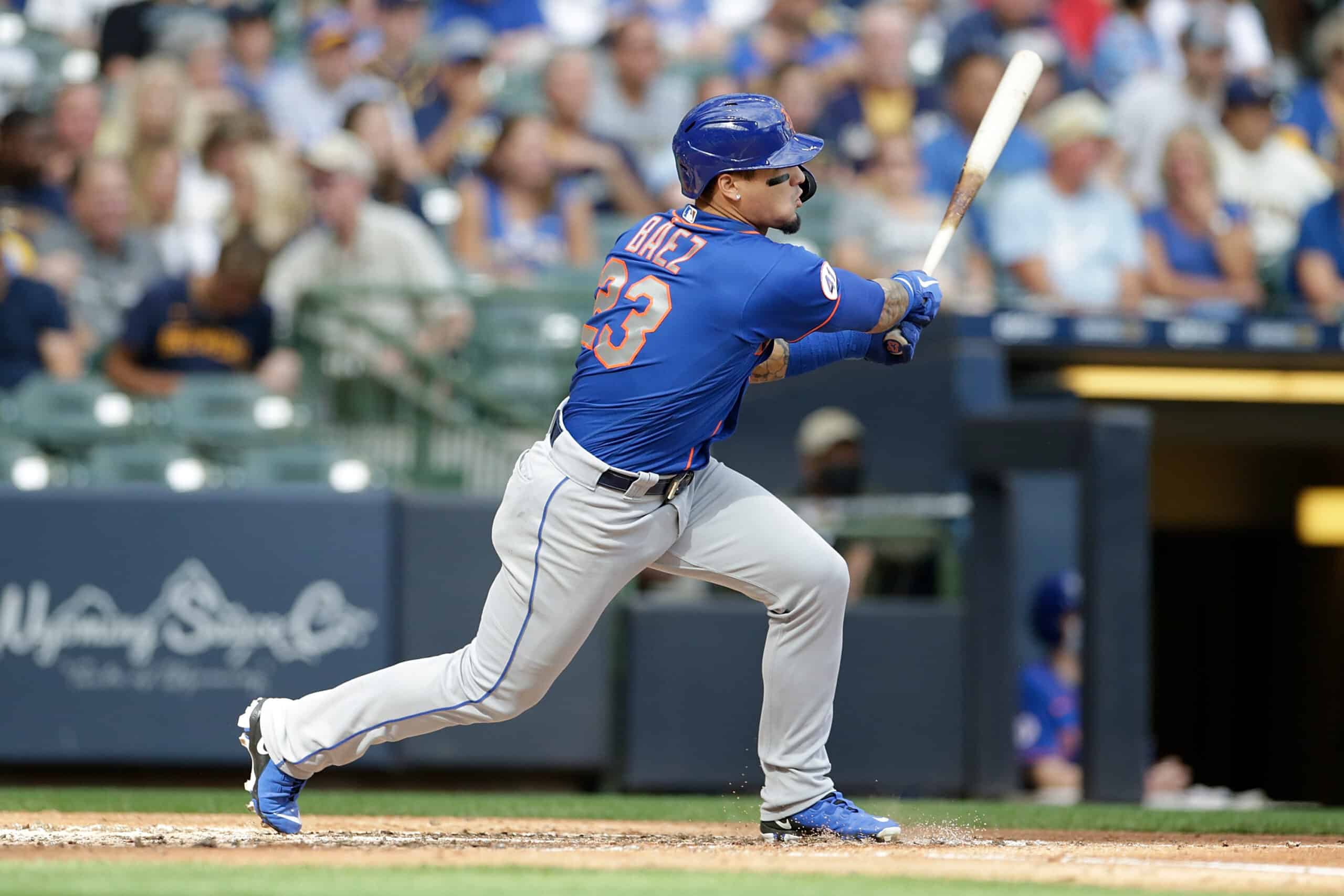 The 2021 MLB offseason is in full swing, and dominoes are already starting to fall.

One of the biggest storylines this winter revolves around the stacked group of free-agent shortstops.

Some superstars at that position could find themselves playing for new teams in 2022, and Javier Baez is one guy that fits that description.

After starting his career with the Chicago Cubs, the 28-year-old was traded to the New York Mets at the 2021 deadline.

He’s now a free agent, and he could join the third team of his career this offseason.

He has been heavily linked to some teams in rumors, but is there a chance that a surprise team could land the former first-round pick’s services?

Here are a couple of dark-horse clubs that might be worth keeping an eye on in the Baez sweepstakes.

It seems like there hasn’t been a lot of buzz connecting Baez to the Los Angeles Dodgers, but L.A. certainly feels like a viable landing spot for the two-time All-Star.

He has manned the shortstop position for several years for L.A., but that could come to an end this winter.

One MLB insider thinks the 27-year-old might be the “least likely” Dodgers free agent to re-sign with the team.

“Seager might be the least likely of the Dodgers’ free agents to re-sign, something they tacitly acknowledged when they put his replacement in place by trading for Trea Turner,” wrote Bill Plunkett of the Orange County Register. “Turner will not be happy at second base for long – and he can become a free agent after 2022.”

As Plunkett implied, Turner will likely shift over to the shortstop position if Seager does indeed sign elsewhere this offseason.

That doesn’t mean the team couldn’t still strike a deal with Baez, though.

Baez has plenty of experience playing second base, and if he’d be willing to play that position with L.A., then a deal would make a lot of sense.

As for Seager, he batted .306 with an impressive .915 OPS in 2021, so if he does sign with a new team this winter, the Dodgers are going to have to find a way to deal with the lost production.

The fourth home run of the inning for the Dodgers is a go-ahead bomb by Corey Seager! pic.twitter.com/Ixo6vReKuy

We’ll see if they look at Baez as a potential replacement.

Surprisingly, the Boston Red Sox are reportedly a “sleeper” in the shortstop sweepstakes this offseason.

To some folks, that doesn’t make a lot of sense, as the team already has a superstar at that position in the form of Xander Bogaerts.

BOGAERTS BOMB OVER THE MONSTER 💣

But apparently, the Red Sox are interested in the possibility of getting creative with their infield alignment.

“They also could be a sleeper in the shortstop market, according to my sources,” Jim Bowden of The Athletic wrote regarding the Red Sox. “Don’t get me wrong, they love Xander Bogaerts. The thinking is they could sign a shortstop and move him to second base, or perhaps even consider moving Bogaerts there.”

Boston needs to be very careful not to make Bogaerts unhappy, as he’s one of the organization’s most important players.

Moving him out of the shortstop position might not be the best idea.

But here’s a possible solution: If the team wants to sign a shortstop without having to switch up Bogaerts’ position, Baez could be the perfect guy to target.

As mentioned, Baez has tons of experience at second base.

In fact, he has appeared in 320 career games at that position.

Given that, he could be a great signing for Boston.

In addition to the good defensive fit, the Red Sox would be getting a great offensive producer in Baez, as he’s coming off of a 2021 season in which he posted a slash line of .265/.319/.494.