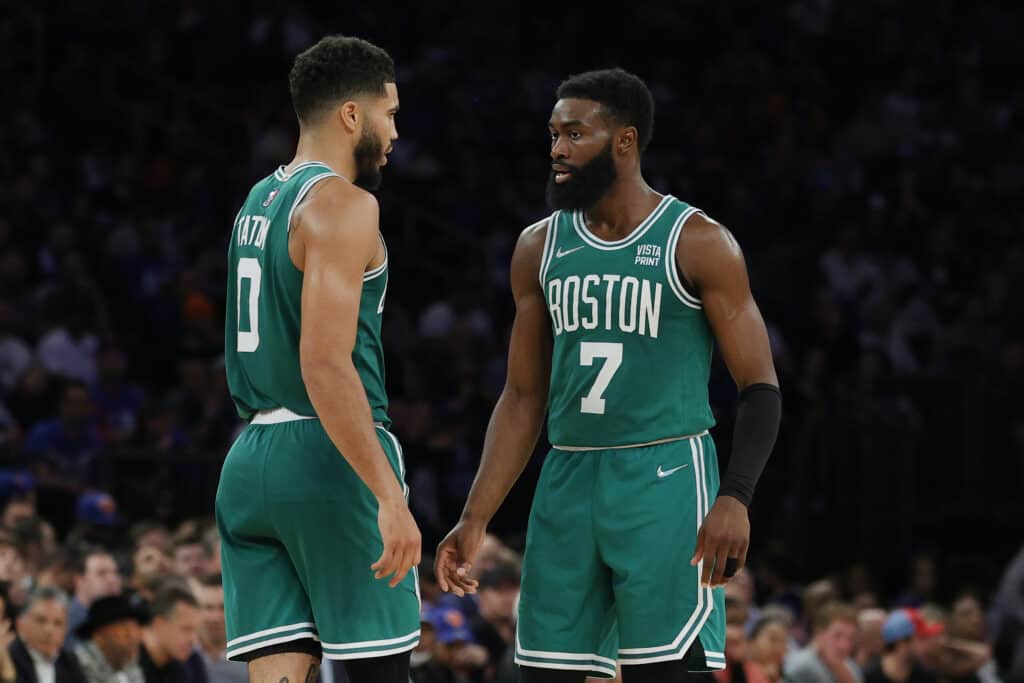 The Boston Celtics have struggled thus far in the 2021-22 season.

They have dealt with injuries, as only three players have played all 11 games this season.

Jaylen Brown‘s leg injury will keep him out a couple of weeks.

He also dealt with COVID-19 early in the season.

It has been a rocky start for the Celtics, who have a difficult division this year.

Also, Marcus Smart has ripped his fellow teammates for not passing the ball.

They have had a players-only meeting already, and that meeting seemed to have helped.

After the Celtics underperformed in 2020-21, they are hoping to get out of this early-season funk and not do the same this season.

The victory on Wednesday night was helpful, as Boston moved to 5-6 with the 104-88 win without Brown.

So, who are the Celtics that need to step up in Brown’s absence?

Let us take a look:

Dennis Schröder has been starting in Brown’s absence.

The Celtics are hoping that he provides the same defense that he did last year for the Los Angeles Lakers.

The guard from Germany finished with the 20th-highest defensive win shares in the NBA last year.

His passing of the basketball this season has been very strong as well.

He ranks 19th in assists per game.

Also, it is important for Schröder to stop turning over the basketball.

His eight turnovers on Wednesday were the most by any Celtic since Brad Stevens joined Boston:

That game should just be a speed bump in terms of turnovers.

Schröder’s 3.9 turnovers per 100 possessions thus far this season would rank second-lowest in his NBA career.

It is obvious that Jayson Tatum needs to play well, but he actually needs to step up for this Boston team to succeed.

He has missed the most field goals of any player in the NBA this season.

Also, his shooting percentage is on pace to be among the worst:

Players in the shot clock era with

would like to see that FG% rise about .060 pic.twitter.com/8A7yTKCLP5

For those who want to bring in the advanced shooting statistics, it does get any better:

All of these statistics are on pace to be career-worsts for the fifth-year forward.

At 5-6, the Celtics are playing average basketball this season.

It is because their star has been playing mediocre basketball.

The next test for him and the Celtics will be the defending champion Milwaukee Bucks.

Last year, the Celtics took two of three from Giannis Antetokounmpo and the Bucks.

Tatum and Brown played in all three of those contests.

In the two victories, Tatum scored 34 and 30 points.

In the loss, he scored just 18 points on 12-for-28 shooting with just one of six makes from beyond the arc.

If the Celtics have a .500 record by the end of Friday night, it should be because the team was led by a strong game by Tatum.

This is a very important game for Boston early in the season.

In Ime Udoka‘s first season as the Celtics head coach, he needs to have this team ready to get its second home victory of the season.